Three popular crags can be accessed from the same parking area and along the same user trail located less than a mile west of Leavenworth in the Tumwater Canyon. In the order in which you approach these crags are: Clems’s Holler (nearest), Retardant Rock, and Special Spot (farthest). Solid, high-quality granite is the bedrock of all these crags. We haven’t featured every climb at each area, but we have listed (and illustrated) those we think are of high quality. More information (and more routes are listed in the second edition of Viktor Kramer’s guidebook Leavenworth Rock.

Access. Drive west of Leavenworth on Highway 2 about 0.6 miles and park at a pullout on the south side of the highway just above Exit Falls. Getting into this pullout is tricky if you’re coming from the east–you must cross the highway on a blind corner. Make that move at the last second and be fast about it…or drive farther up the highway, turn around at a safer spot, and come back. No permits are needed to park here. This topo map is helpful:

Climber’s Trail. The climber’s trail to all three crags starts about 75 yards west (up river) of the parking pullout and heads uphill on the north side of the highway. You’ll climb steadily and steeply for 20 minutes (550 vertical feet) to reach Clem’s Holler, the first large crag you’ll encounter. To reach Retardant Rock (another five to 10 minutes away), head leftward and upward at Clem’s Holler, then traverse more than climb for a few minutes, and then climb more steeply in a leftward direction. Special Spot is less than a five minute walk left and up from Retardant Rock.

We’ve listed six routes that are all of high quality. They are listed from left to right when you face the wall. Most of the routes are well bolted but some need additional gear. All routes can be safely descended with a 200-foot rope.

1)       Gun Rack (5.9). The farthest left route, the first pitch is steep and makes a strenuous, athletic move over a roof shortly below the first anchor. The second slab pitch (5.7) is clean and cruisey. Bolt protected but a few pieces (up to 1”) can add piece of mind.

3)       Poultry in Motion (5.10c). A shorter, stiffer route that’s completely bolted. A varied climb with fun moves. The fact that our chicken-skinned staff could lead this without falling off makes us suspect the rating is generous.

4)       Perils of Pauline (5.11c). An even stiffer bolted route. Reputed to be good—hacks that we are, we couldn’t confirm that reputation.

5)       Nettlesome (5.9). A varied route with some vexing moves. The fact that we’ve seen a number of 5.9 climbers slip off the wall around the third bolt makes us wonder if this one isn’t underrated.

Clem’s Holler is hard to photograph so we’ve included what is either a retardant’s art project or a primitive schematic of the wall. It may be primitive, but it’s enough.

You’ll ‘get’ the name of this crag when you see it. Fire retardant, used to quell a forest fire in 1994, hit the right side of the wall and streaked the cliffs with a rusty, orange hue. The rock may be oddly colored, but it is quality stuff and we’ve listed four very good routes. All routes can be safely climbed and descended with a 200-foot rope.

2)       Agent Orange (5.8). A clean, sustained route that passes five bolts and takes a few gear placements (gear to 2 inches) if you’re feeling the moves feel a tad stiff for the rating.

1)       Opening Ceremony (5.9, yellow). A varied, and sustained route that passes through the distinctive canoe-shaped slot. This excellent route protects well but relies on a combination of bolts and placements (gear to 1.5” or 2”). The pitch is 110 feet long and will entail a little down-climbing if you rappel it with a 200-foot rope.

2)       Final Exam (5.10a, orange). Another excellent route up Yosemite-like granite. This 150-foot pitch is varied in the technique required. The slab at the top (bolt protected) is a tough final test. Bolts and gear to 2.”

3)       Clean and Peeled (5.9, red). Located in the center of the wall, the first short pitch wanders through cracks and slabs to a two-bolt anchor. From the anchor, the route slants off to the right and then curves left again to a second anchor. Variation (yellow): If you go straight above the first anchor, you’re on the interesting pitch of Special Olympics–follow bolts up a clean slab ( 5.9+ or 5.10a) to the same second anchor.

4)       The Javelin (5.10b, orange). A steep strenuous 80-foot climb that’s locally famous because it’s on the cover of Kramar’s guidebook, Leavenworth Rock. For the lead climber, the underclinging crux creates a dilemma: Use only the bolts in place and feel a tad runout or place intermediate pro and fry the arms? A small selection of cams between 1” and 4” will provide more security if you decide to fry the arms.

Photo: That special spot…making the final underclinging moves on The Javelin. 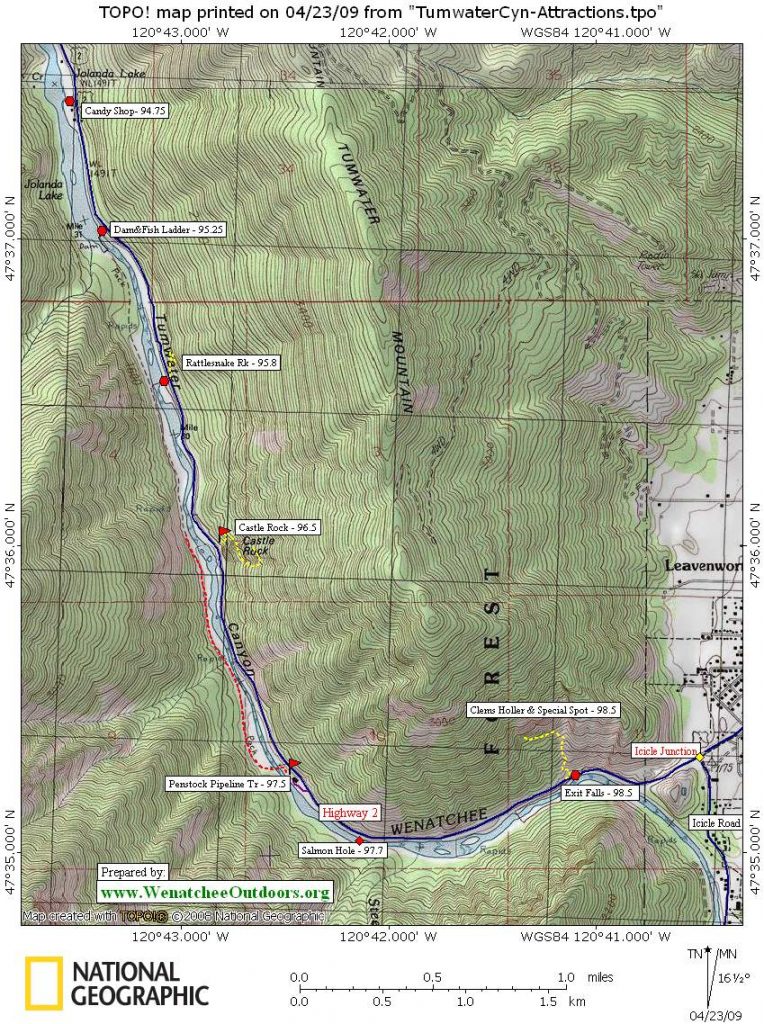