Bob Parlette (second from right in yellow shirt) snipping a ribbon representing twenty years of effort and 10 years of litigation.

At the ribbon-cutting ceremony for the dedication of the newly completed Rocky Reach Trail this past July, Bob Parlette joked, “There were times I thought I wouldn’t live to see this day.”

Parlette, the longtime co-chair of the Complete the Loop Organization, a non-profit trails group that partnered with Washington States Parks to plan and build a non-motorized trail leading from the northern end of The Loop Trail in Wenatchee to Lincoln Rock State Park at the Rocky Reach Dam, was only partially joking.

For over 10 years the trail supporters who wanted to use a Department of Transportation corridor bordering the Columbia River, were tied up in litigation by fruit growers who opposed the trail. A variety of concerns worried the fruit growers — the most touted concern being that recreationalists might sue adjoining orchardists over alleged health issues brought about by the ‘spray drift’ of chemicals used to grow fruit. During this time Parlette, who is now 74, would joke “The winner of this thing may be the last one standing … and I’m determined to out-live them.”

Indeed, one of the main trail opponents, John Tontz, died unexpectedly before the matter was fully resolved. Meanwhile the courts did not support the opposition’s claims and after the fruit growers lost multiple appeals as well as 9-0 decision before the State Supreme Court, the game was over.

With legal matters finally resolved, Parlette, the Complete the Loop Coalition, and State Parks, were relentless and expedient in raising the necessary finds to pave the 5.5 miles of new trail. These funds came from the Chelan PUD, state grants, and legislative appropriations secured by local legislators — Brad Hawkins in particular deserves acknowledgement for helping secure $3.77 million in appropriations for the cause. The Complete Loop Coalition also raised over $500,000 from local donors for this trail extension.

The Rocky Reach Trail is built now and, although the fight was long and tedious, generations of users will benefit from its existence. Like The Loop Trail, the community will quickly come to love this beautiful riverside trail. Fifteen years from now the community will take it for granted that the ability to access, walk, and ride along the Columbia is an obvious public good. At that time it will be hard to imagine that during a decade of litigation this trail hung by a thread multiple times and that it exists because one person just wouldn’t let it (or himself) die.

Additional History. The late Dr. Gordon Congdon was the other co-chair who started this project with Bob Parlette. Congdon died in 2001 and Parlette says, “He didn’t get to see the trail we both dreamed of, but I promised him I would see it through.” Following Congdon’s death Doug Pauly worked with Parlette to make the trail a reality. Parlette says Pauly added a sense of optimism to a process that would depress most reasonable people. “He was at every one of the many hearings about the trail.”

Click here to see an extensive listing of what has been written about issues affecting The Loop Trail and the Rocky Reach Trail (also called The Loop Trail Extension) from 1997 to 2010 (read from the bottom up if you want to read it in chronological order).

Difficulty: easy/beginner – the trail is paved and smooth. There are some slight undulations along the way but the elevation gained or lost is minimal.

Interpretation. There are interesting signs along the way discussing riparian fauna, salmon, river history, hydropower and more. Budget a little extra time on your first visit so you can learn while you sweat. Witnessing what is probably the first skateboard passage of the trail.

Permits. If you access the trail via a State Park, you’ll need a Discover Pass for your car. This guidebook post is sponsored by Northern Fruit Company located in East Wenatchee. Northern Fruit has been a steadfast supporter of WenOut since its inception in 2005. Northern Fruit appreciates and supports organizations that foster the physical well being of our community members along with a collective voice for our outdoor recreation community. 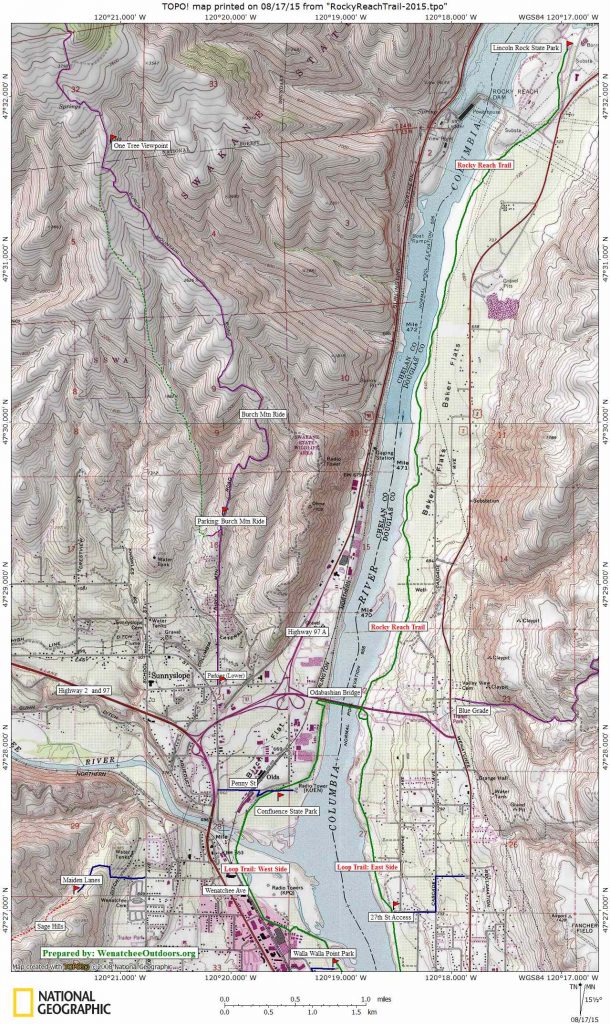