It’s not that old dogs can’t learn new tricks – it’s that old dogs resist learning new tricks. Take me for example. I gave up whitewater kayaking shortly after my first daughter was born. That decision had nothing to do with being responsible or becoming wiser. It’s simply that with little cubs running around something had to give if my kids were going to grow up knowing me. Mountain biking, climbing, and hiking were all more time efficient so I kept at them, but whitewater kayaking involved more time shuttling vehicles around than actually playing, so it fell off the plate.

Eighteen years later my kids had more of a life than I did and, suddenly, there was more time…for me.  And now that I lived in Central Washington, had the Wenatchee River in my backyard, and suffered through those hot weeks of summer when my main sports were blistering, sweltering, sweat fests, whitewater kayaking looked  awfully appealing.

So I took to the river again using a kayak that was all the rage in the mid 1980s.Younger paddlers heckled me with comments like, “Ditch the dinosaur and join the 21st century.” Or “Is that the Queen Mary you’re paddling?” Modern paddlers told me the short, flat-bottomed playboats are to kayaking what wide, shaped skis are to skiing – they’re easier and just a lot more fun.

Despite the teasing and the prompting, the old dog resisted. Floating the Wenatchee from point A to B, busting through big breaking waves, and reaching Cashmere alive…that was fun enough. Eventually, however, whitewater boating was proving to be a hassle again with the multiple cars needed for shuttling and the need to shuffle boats various times between various cars. Logistic-wise, time-wise, money-wise, environment-wise, it was far more squanderous than hopping on a bike at home and riding, or carpooling to a crag and climbing.

Then local paddler, Neil Heinitz, prevailed on me to give his older playboat a try. At about 8 feet in length it was larger than the 6-foot boat people my size might buy today. But his Dagger Medieval had the flat bottom, the sharp edges, and low volume ends that modern boats rely on to plane, surf, cartwheel, and throw freestyle tricks. “This will open your eyes to whole new world of boating,” Neil predicted.

“Yeah, yeah,” I thought but I took the boat to humor him. I spent an hour on flatwater getting used to the sporty feel and making sure I could roll it when the inevitable happened I bottomed up in the river.

A few evenings later we headed out to play at Rodeo Hole upstream of Cashmere on the Wenatchee River. Neil coached me on how to weight the boat and set the edge so the kayak would slip right onto the wave. Off  I went. I missed the wave twice and caught the eddy that returned me to the wave’s entrance point. On the third try magic struck. I was on the face of a green wave looking upstream as the oncoming river screamed by. I was traveling at mach speeds going absolutely nowhere. And rather than plowing the nose of the boat, like I would have with the Queen Mary,  I was staying on the middle of that green hill linking turns left and right. The Cascadian snows I had been skiing all winter  were flowing under the boat and I was turning on them yet again.

In that first wild surf as the nose of the short boat plunged down that green hill and water sprayed off the edges of the boat in arcs around me, a new playboating enthusiast was born. Heck, if you were an avid powder skier and got a taste of whitewater surfing, how could the thrill not sink its hooks in you?

The next day I called Adam McKenney, the owner of Leavenworth Mountain Sports, a playboating fiend himself, and one of the more knowledgeable people about the Wenatchee River’s best playboating features, how those features run at different water levels, and how to work some of those play features without what I’m increasingly annoyed about – a two-car shuttle. Which features can you work with no shuttle; a short walk or run; or a short bike shuttle? I’m excited about what he told me, and this summer I’m no longer going to be shuttling as many vehicles around or resisting learning new tricks.

Note: River levels mentioned below refer to the Monitor Gauge

House Run (west of Leavenworth ). Put in below Exit Falls (0.55 miles west of the Icicle Road on Highway 2).

Boulder Bend is a Class III+ to IV rapid about a third of a mile downstream of the Highway 2 bridge at the east end of Leavenworth. Put-in at Barn Beach or Waterfront Park in Leavenworth, float down to the rapid and play. When done, exit at the KOA beach just downstream of the rapid on river right and walk, run, or bike 1.5 miles back to the car. Best flows for playing here: 3,000 to 8,000 cfs.

Happy Wave is a beautiful surfing wave with a great eddy below that feeds you back to the wave. The wave is accessed from a dirt road branching off  a pull-out on the north side of  Highway 2 (milepost 102.5) about 2 miles east of East Leavenworth Road in Leavenworth. The dirt road leading down to the water and the riverfront itself are owned by Osprey Rafting and a permit is required for access and parking. In 2010, permits cost $5/day and $35/season. Contact Osprey Rafting (548-6800) for information. Pickup permits at the Osprey Rafting office (corner of Highway 2 and Icicle Road). The office is open daily during the summer. If you have a seasonal permit, call Osprey before heading out to surf – the entrance gate unlocks by a combination that changes frequently.

Warning. River features (like waves and holes) and how they respond at different water levels can change from season to season. Our information applies to what was observed in 2009 and what has been observed as of the end of June in 2010. Take this information with a healthy grain of salt, knowing that what was observed about waves and holes in 2009 and early 2010 is not an exact prediction of how that feature will behave in the future. With time some features become more retentive than they had been in the past, others become less retentive. As always, it’s up to you to study these features as you float the river and decide for yourself whether you’re boating skills will allow you safe playing and safe passage.

River Levels. All the river level information is based off  the Monitor Gauge.

Skill Level: 2 to 4. Depending on the feature and the water level, this portion of the Wenatchee River offers playing that will attract Class III to Class IV+ boaters. 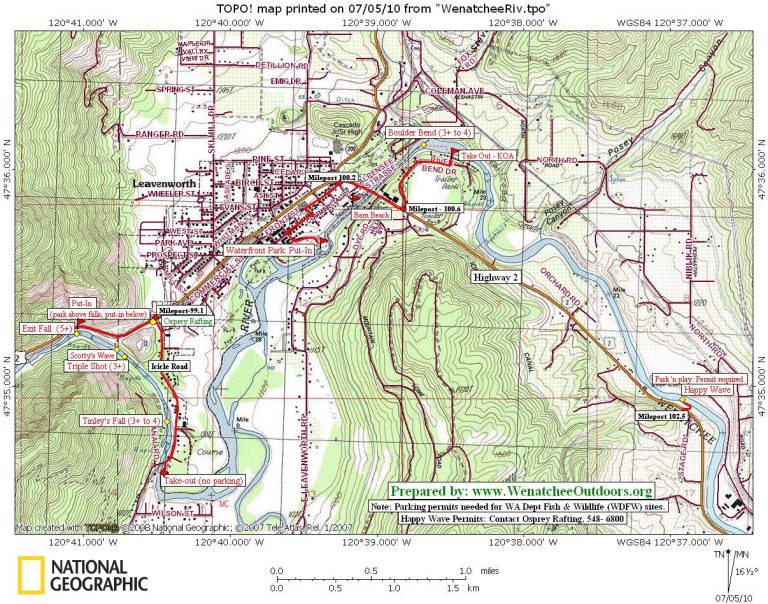 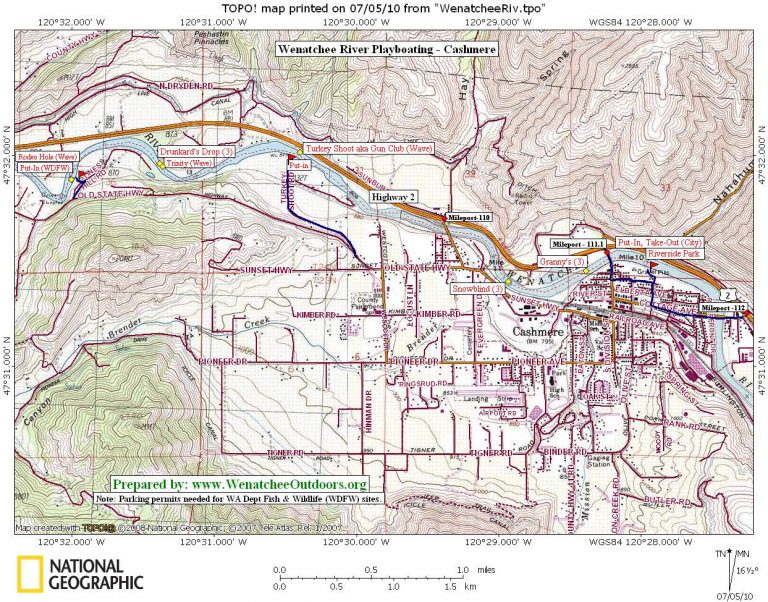