ATTRACTIONS. The Columbia River of Central Washington is neither the wild, nor romantic river we associate with the tales of its history. Its rapids and falls are gone, as are its native people and dense wildlife. Throughout much of the region, roads inhabit one or both shorelines; dams transform the river into a string of lakes; and homes, businesses and orchards line the banks. That being said, there are still many enjoyable nooks to the Columbia where a particular attraction, like an estuary or a geological feature, provide the focal point of a paddle trip. In this case the Entiat River is the main attraction. You can paddle about a half a mile up this tributary before swift currents block your progress. Along the way you’ll encounter thick birdlife — eagles, blue herons, kingfishers, mergansers, mallards, magpies, stellar jays and much more. The Columbia River itself near Entiat is not spectacular but still yields fine views of the surrounding hills.

ACCESS
Option 1.Drive Highway 97A north of Wenatchee to the town of Entiat. The south entrance into Entiat Park is at Milepost 214.8, turn in toward the river. Between April 15 and October 15, the gate will be open and you can enter the park free as a day user. Follow the road past the ramp for motorized boats (on the south end of the park) and drive to the north end of the park where there is a nice grassy cove providing a good place to launch. In late October and November, you can often enter the park from the north by turning toward the river at Lakeshore Drive (milepost 215.5, immediately across the highway from the Food Center) and driving south for half a mile. Note: In off season, it is the city’s policy to provide public access to the water if you call ahead to City Hall (784-1500) and make arrangements.

Option 2. For a one-way daytrip along this stretch of river, use Orondo River Park to the north and Lincoln Rock State Park to the south as your put-in and take-out points. The current along this reach is weak (the water behind Rocky Reach Dam is called Lake Entiat for a reason), so rather than assuming you should paddle with the current (north to south) you’re much better off getting the wind forecast and using the expected wind direction as your direction of travel. You may also want to use a bicycle for the 11-mile shuttle (the highway is busy but the shoulder between these parks is reasonable). Orondo River Park is located north of the town of Orondo — follow Highway 97 roughly three miles north of the Highway 97/Highway 2 junction. There is also a PUD launch along the highway about 0.25 miles above Orondo Park and it has parking for about 2 cars — you can launch any time of year and there is no launch fee. The entrance to Lincoln Rock State Park, meanwhile, is four to five miles north of the Highway 97/Highway 28 junction and just a bit north of Rocky Reach Dam.

TRIP INSTRUCTIONS
Option 1. Put in the river at Entiat Park and paddle about a mile downstream following the western shoreline of the Columbia. At the Entiat River confluence, paddle under the highway bridge and head up the Entiat River about half a mile until the current stops you. Return to the Columbia, turn right, and paddle south for another 1.5 miles. Cross the river and follow the shoreline of a wilder, brushier cove as you work back upstream along the eastern shoreline. When you’re across from the cove where you launched, cross the Columbia again and complete your paddle.

Option 2. Depending on the forecasted wind direction, put in at either Lincoln Rock State Park or Orondo River Park, and then, letting the wind push you, follow the eastern shoreline of the Columbia 10.8 miles to the other park. For current and forecasted winds, check this link at iwindsurf.com

RECOMMENDED SEASON. Any time of year. In summer, it’s nice to be on the water on a hot day and you can swim when you overheat, but the powerboats can be out in force (especially on weekends). I prefer late fall, winter, and early spring when you have the river to yourself and the surrounding mountains are capped with snow.

HAZARDS. Strong winds frequently blow on the Columbia (particularly in the afternoon) and inexperienced boaters should be very careful about crossing the river or getting more than a short distance from the shoreline if it’s a windy day. This is doubly true if you’re paddling in autumn, winter, and early spring when both the water and air temperatures are cold.

USES ALLOWED. Most anything goes.

LAND DESIGNATION. Much of the shoreline is private, but there are a number of pockets of public land where you can get out and stretch. When you’re passing along private property who owns the shoreline below the high-water mark? Tom Feil, a local paddler who has investigated this issue, says: “The answer depends on who you talk to. Representatives at the Chelan PUD I’ve asked say the PUD actually owns the land, but I’ve yet to see facts to back this up. The land owners I have talked to say they own the land down to the old river bank before the dam. I believe the land owners are right because I think the PUD only bought the flood rights, not the land, and any land out of the water these days will still belong to the land owner. It may come down to a ruling by the courts to really find out.” 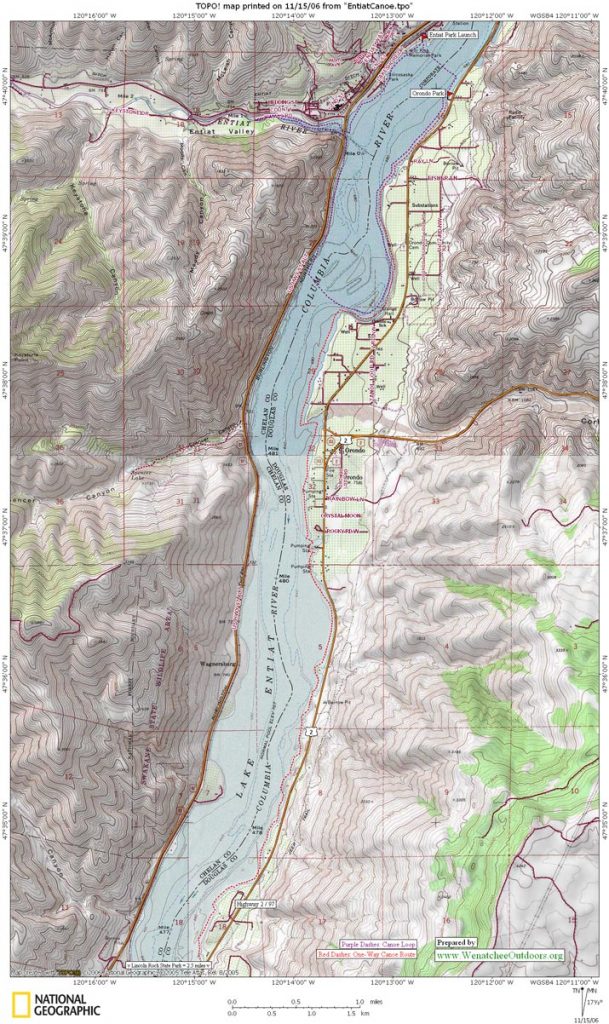