Attractions. The Columbia River of Central Washington is neither the wild, nor romantic river we associate with the tales of its history. Its rapids and falls are gone, as are its native people and dense wildlife. Throughout much of the region, roads inhabit one or both shorelines; dams transform the river into a string of lakes; and homes, businesses and orchards line the banks. That being said, there are still many enjoyable nooks to the Columbia where a particular attraction, like an estuary or a geological feature, provide the focal point of a paddle trip. In this case, Goosetail Rock is the main attraction and it’s fun to paddle right under the 100-foot cliffs looking up. The general scenery as seen from the river, while not spectacular, is pretty, especially in spring when the surrounding hillsides are green, and in winter when the high hills are white.

Access: Drive roughly seven miles north and east of Entiat along Highway 97A and, at milepost 223.7, branch right on Stayman Flats Road. Follow this road and, immediately after the 2-mile mark, use the large pulloff on the right side of the road. Park on east end of this pullout and from here either drop right down to the river (steep), or carry your boat 50 yards east along the road, branch right, and walk through the brush toward the trees lining the river.

Trip Instructions: Paddle up the river (east) for about one miles. When you see that point on the far side of the river where the highway comes right down alongside the water, paddle across the Columbia. Now turn and paddle down the river (west) for about three miles.  When you reach the point where there is a large development alongside and above the river, cross the Columbia again, aiming for the west end of Goosetail Rock. Paddle slowly past Goosetail Rock, then head back up river about two miles to the launch spot.

Hazards: Strong winds can blow on the Columbia (particularly in the afternoon) and inexperienced boaters should be very careful about crossing the river or getting more than a short distance from the shoreline if it’s a windy day. This is doubly true if you’re paddling in autumn, winter, and early spring when the water and air temperatures are both cold.

Recommended Season: This is an enjoyable paddle any time of year. In summer, it’s nice to be on the water on a hot day and to jump in the river whenever you overheat. I prefer late fall, winter, and early spring when you have the river to yourself and the surrounding mountains are capped with snow.

Uses Allowed: Most anything goes.

Land Designation: The shoreline you’ll be bordering is mainly private land. Who owns the shoreline below the high-water mark? Tom Feil, a local paddler who has investigated this issue, says: The answer depends on who you talk to. Representatives at the Chelan PUD I’ve asked say the PUD actually owns the land. The land owners I have talked to say they own the land down to the old river bank before the dam. I believe the land owners are right because I think the PUD only bought the flood rights, not the land, and any land out of the water will still belong to the land owner. It may come down to a ruling by the courts to really find out.

Fees / Permits: No permits are needed to use the launch site.

Maps: See map below for more information. You’ll need both the Winesap and Chelan quads from the USGS 7.5-minute series. 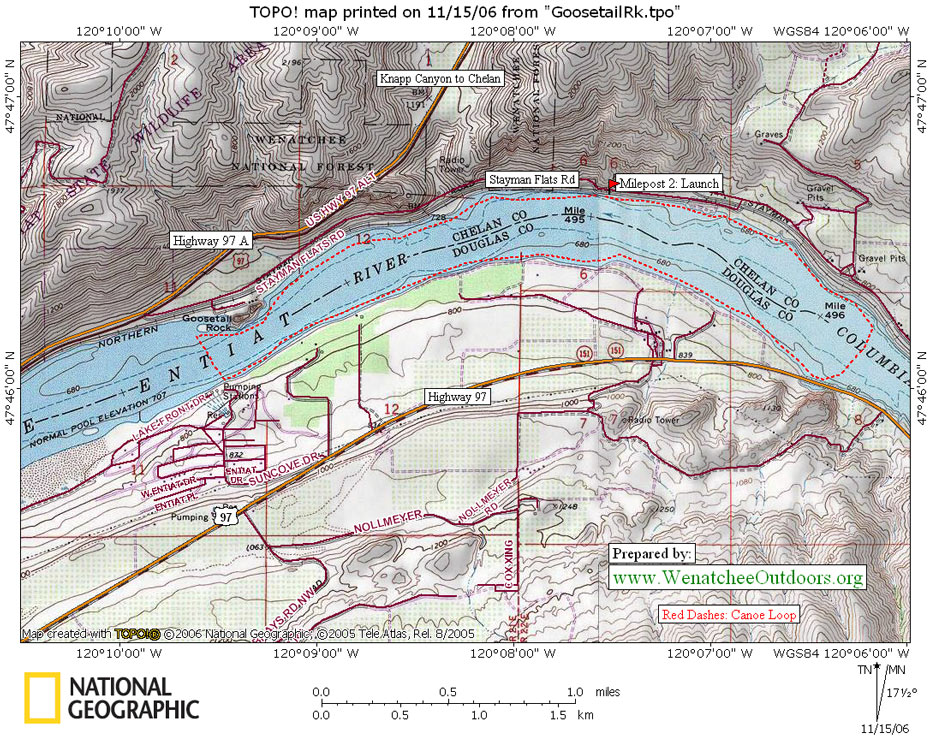