These two ski tourers invited us to attend this latest psychopathic scheme where the penance of self-loathing leads to self flagellation. Because we actually like ourselves, we declined the joy of getting dragged around the mountains like dead squirrels stuck to the chassis of Formula 1 racing cars. There had been a tinge of regret, but John Plot’s trip report (below) cured that.

This is the Year of the Road Slogs for me.  Adam Vognild and I discussed several possible ski tours this weekend.  Adam wanted a sadistic, two-day excursion with an insane amount of mileage and vertical only he could accomplish.  I, on the other hand, had just one day to burn.  The compromise: We decided to cram what might normally be a two-day effort into one long day.  See map below.

At the Mountaineer Creek Trailhead, the touring really began.  We skinned up the icy trail, which resembled I-5 due to the volume of traffic that’s been visiting Colchuck Lake over the past few weeks.  Ironically, after all these signs of people, we only encountered one person all day.

Route finding is notoriously tricky after the Colchuck Lake turnoff, but we actually made excellent time following a pre-existing skin track leading all the way up Mountaineer Creek into the steep-walled basin confining the Sherpa Glacier. These tracks, we later learned, belonged to three hardcore skiers who climbed and then skied the Ice Cliff Glacier on Saturday.

We threw on the ski crampons as we headed up the Sherpa Glacier.  Adam, like others I’ve skied with this year, is a trail-breaking machine blessed with an extra gear most mortals are missing.  He broke trail all day while, from behind, my sorry behind struggled to keep pace.

About 800 feet below the top of the Sherpa Glacier, we strapped skis to packs and carried on toward the col capping the glacier, kicking steps in the variable snowpack. We topped out at this col and took a break enjoying the views down into Ingalls Creek and south toward Esmeralda, Iron, and Earl peaks. Next we traversed to the top of the Cascadian Couloir. Had we been stronger and faster, we might have inisited that we touch the summit but, after 9 hours of climbing, the pull of the descent was great and we succumbed. We snapped on the skis and carved over 3,000 vertical feet of sun-soaked glop as we dropped toward Ingalls Creek. At about the 5,600-foot level, we gave up on the fall-line skiing and concentrated on conserving energy by cutting a traverse toward Stuart Pass. We traversed for about a mile without skins on, using gravity to help cover distance. Then the skins went back on and we slogged uphill through the super-saturated snows of a spring afternoon.

We reached the notch east of Stuart Pass and immediately east of Point 6,656 (see map) around 5 p.m. and took a brief break in the cold wind. Then we skied down the opposite side of the pass a couple hundred feet before contouring and starting the last sizable uphill push — a 1,400-foot climb to Goat Pass on the northwestern shoulder of Mount Stuart. Much of this route was so wind scoured, that exposed scree and gravel forced us to walk.

We topped Goat Pass at around 6:30 p.m., took a brief break (at my insistence) and geared up for the ski down to Stuart Lake. The turns here on the slopes below the north face of Stuart were fun, continuous, and exhilarating.  We reached Lake Stuart around dusk, with just enough light to scoot down the trail down to the Colchuck Lake turn-off. With headlamps illuminating the way, we skied the icy luge course down to the road, then quickly skied the road until snow gave way to dirt.  Reluctantly, I strapped skis to pack once again and stumbled the last few miles to the car. It was 11 p.m. when we got there. I was completely wasted yet giddy over how much ground we had covered in one day.

Adam informed me that, according to his altimeter watch, we had also knocked off a 10,000 vertical-foot day. My throbbing feet figured that figure to be about right. (See slideshow).

Details, Details:
–We parked near the Bridge Creek Campground some eight miles up the Icicle River Road, then walked and skied 4 miles up the Eightmile Road to the Mountaineer Creek Trailhead (the trailhead used to reach both Colchuck and Stuart lakes). Permits were not needed to park down low.
–Doing the trip later in the spring when the Eightmile Road had just opened for vehicles would make this route a little saner as a day trip. A Northwest Forest Pass is needed to park at the trailhead.
–We carried ice axes and crampons but didn’t need them on our push. In some snow conditions, you’d definitely want them.
–The schrund that forms at the top of the Sherpa Glacier later in the season was well filled in and a non-issue. We could see an indent starting to form and walked around it to climber’s right.
— Skiers devoting two days to this route could camp in the pretty little basin below the Sherpa Glacier at about the 5,400-foot level. There are also a variety of places to camp along Ingalls Creek.
–Doing an out-and-back to the summit of Stuart via the Sherpa Glacier is a reasonable skiing objective. As fate would have it, the snow conditions we encountered on the Sherpa Glacier were variable windcrust and suncrust and would have been unpleasant to ski (things need to corn up more). Furthermore, with this being my ‘Year of Slogging,’ the circumnavigation of Stuart was a compelling objective.
Map: See map below for more information. 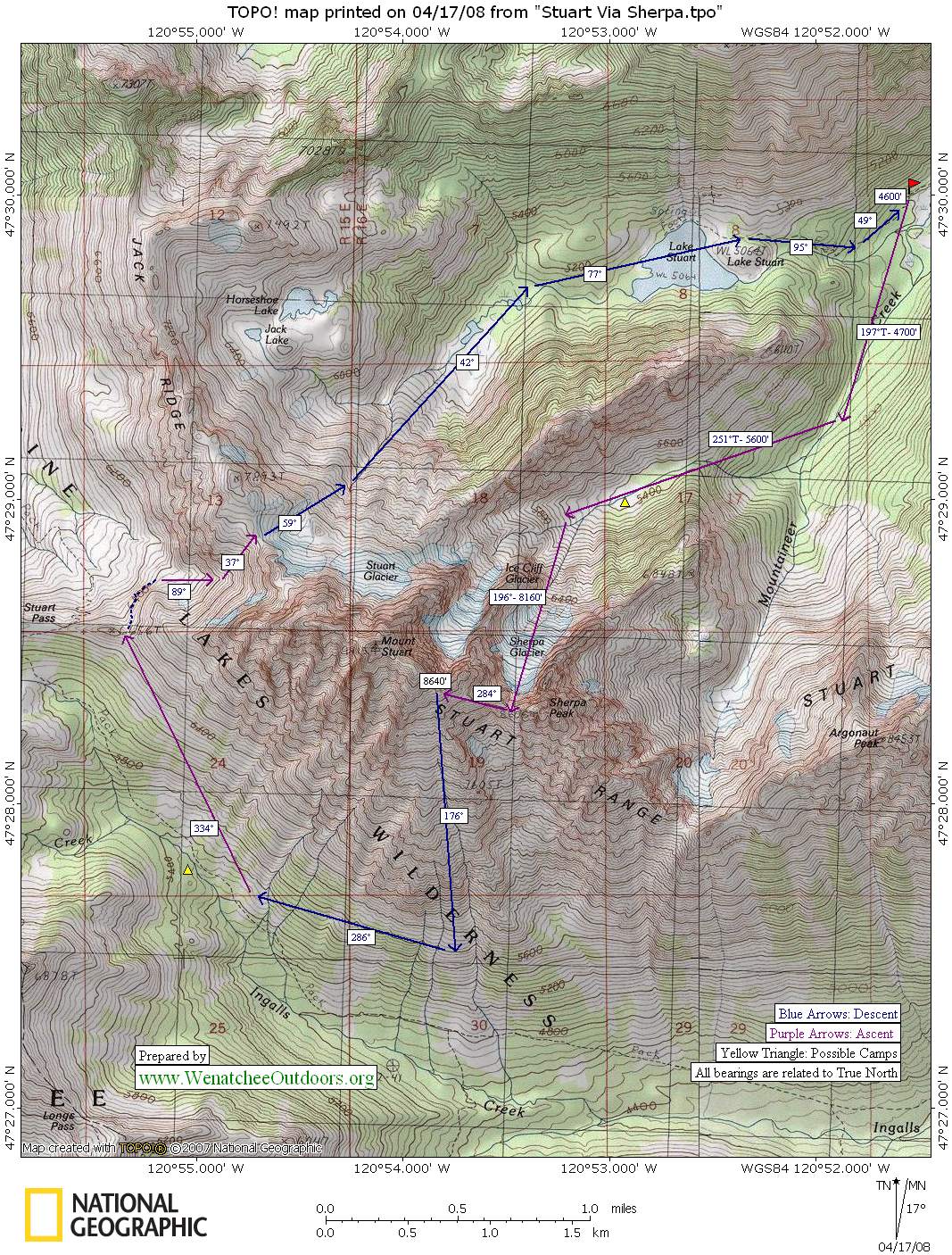