A 90-mile week-long trip circling of Washington’s most remote volcano and visiting some of the prettiest areas in the Glacier Peak Wilderness. A must-do for avid hikers that won’t disappoint.

The route follows many miles of excellent trails but can entail climbing the peak, climbing lesser peaks in the region, traveling cross-country, and following a number of brushy climber’s trails. The route yoyos between valleys populated by old-growth monsters and ridges with views of the infinite.

Additional Information: Steve Fox walked this route with a group of us from Chelan County. We’ve pasted the information from his personal site at the end of this post.

Map: The topo map below was prepared by Steve Fox.

Our party hiked a fantastic 9-day trip around Glacier Peak. We started on Sat, Sept 1 up the White River trail. It gets mighty brushy past the Boulder Creek trial, and we all got soaked in the light rain. The first crossing of the White River must be ford ed, even at this time of year, but was easy. Since our feet were wet, we just stomped through the water. After the second walk-across crossing at 3700′ we camped with soggy boots and dreams of sunny days. Several in the party suffered greatly from heel bl isters caused by the wet boots.

Day two had better weather. The upper White River trail is still brushy and unmaintained, but with woody plants instead of annuals. At the 5400′ pass we dropped our packs and easily scampered up Indian Head Peak (T2). Incredible views abound from Rainier to Baker. We hiked northbound on the PCT to White Pass. During the day we heard several reverberating BOOMS. It was three forest service women blasted out rock on the PCT. They halted us and some thru hikers so we wouldn’t be blown to smithereens. They sure seemed to be enjoying making all the noise! We headed to Red Pass, where I easily scrambled Portal, Pt 6910 and White Chuck Cinder Cone, (all T2). Our camp below Red Pass was a super site with great views, large meadows, and superb stargazing. But a few sprinkles started early the next morning.

The third day was a long drop down to the flatlands and mossy rainforests of the White Chuck River valley. This gorgeous forest begs slow travel to soak up its ambience. It’s a lush green carpeted wonderland. We managed the river crossing at Kennedy Cree k with no difficulty — a set of small logs placed 200 feet below the trail. Then up and up Kennedy Ridge to a camp near Pumice Creek. We scrambled up 2500′ for a stunning view of Glacier Peak from Kennedy Peak (T4).

On the fourth day we climbed up the PCT to Fire Creek Pass. While there we spent several hours to scramble over to Fire Mt and two other bumps (T3). Back on the PCT we descended to Mica Lake for a quick dip. Then down, down, down to Milk Creek … and up, up, up to Milk Ridge, staggering very late to our camp on its east fork. That night was very chilly.

Day five we started up in fog with no views to the Grassy Point junction. We continued northbound on the PCT around Vista Ridge and down to Vista Creek. Two thru hikers came blasting by, wishing for cigarettes at their next stopping at Stehekin! Hmmm. We continued past the Suiattle River and up towards Miners Creek. I took off for an adventure up the steep, abandoned Middle Ridge trail. Sure enough, it’s still there if you look very closely. Start at 3600′ on the PCT as it rounds Middle Ridge. At 4000′ loo k carefully as the trail turns. Blazes mark the way. At 4200′ the ridge becomes distinct. There are a few sawn logs. At 4800′ are some confusing switchbacks. At 5200′ is a welcome flatter section. At 5400′ is lots of blueberry brush and the tread is lost. Yum though! At 5500′ the trail is lost in grass. There are several dry camps in this middle section. Closer to the Buck Pass trail the tread becomes very distinct due to traffic from that trail. I dropped down the Buck Pass trail to meet the gang at the large Miners Creek Camp, a half mile north of the PCT. The sixth day we headed back to Buck Creek Pass to the most splendid blueberry collection on earth. Gorging ourselves on the copious quantity, our lips, teeth, tongues, and fingers stained dark blue. We camped a bit south of Buck Creek Pass near a spring. We climbed Flower Dome and Helmet Butte during the afternoon. During the night a windstorm came in and blasted our tents. It rained a bit but we managed to get through dinner first. A family of 5 deer entertained us throughout the night.

Day seven we hoisted our packs up to High Pass. There is one steep, hard snow area past the trail marked on maps. But we found an easy rock scramble around it. The weather changed from stormy to glorious sunshine and we enjoyed fabulous views of glaciated ridges and peaks, lovely valleys, and austere high alpine lakes. We tried to climb Buck Mt but got way off route. With too little time, we retreated. So we went up Cleator and Mouse Peaks as penance.

The eighth day we descended down the pretty Napeequa Valley high route and dropped to the bottom of the valley. The crossing of the Napeequa was only shin deep and soon we were slogging our way up the nicely graded, but sometimes brushy trail to Boulder Pass. We dropped down to a nice camp near Boulder Creek, also complete with tons of blueberries. One doe hung around camp like a pet.

Day nine we dropped down the sometimes brushy Boulder Creek trail to the White River and out. A great trip! Stats: 88 miles, 18000′ gain (not including extra peaks). 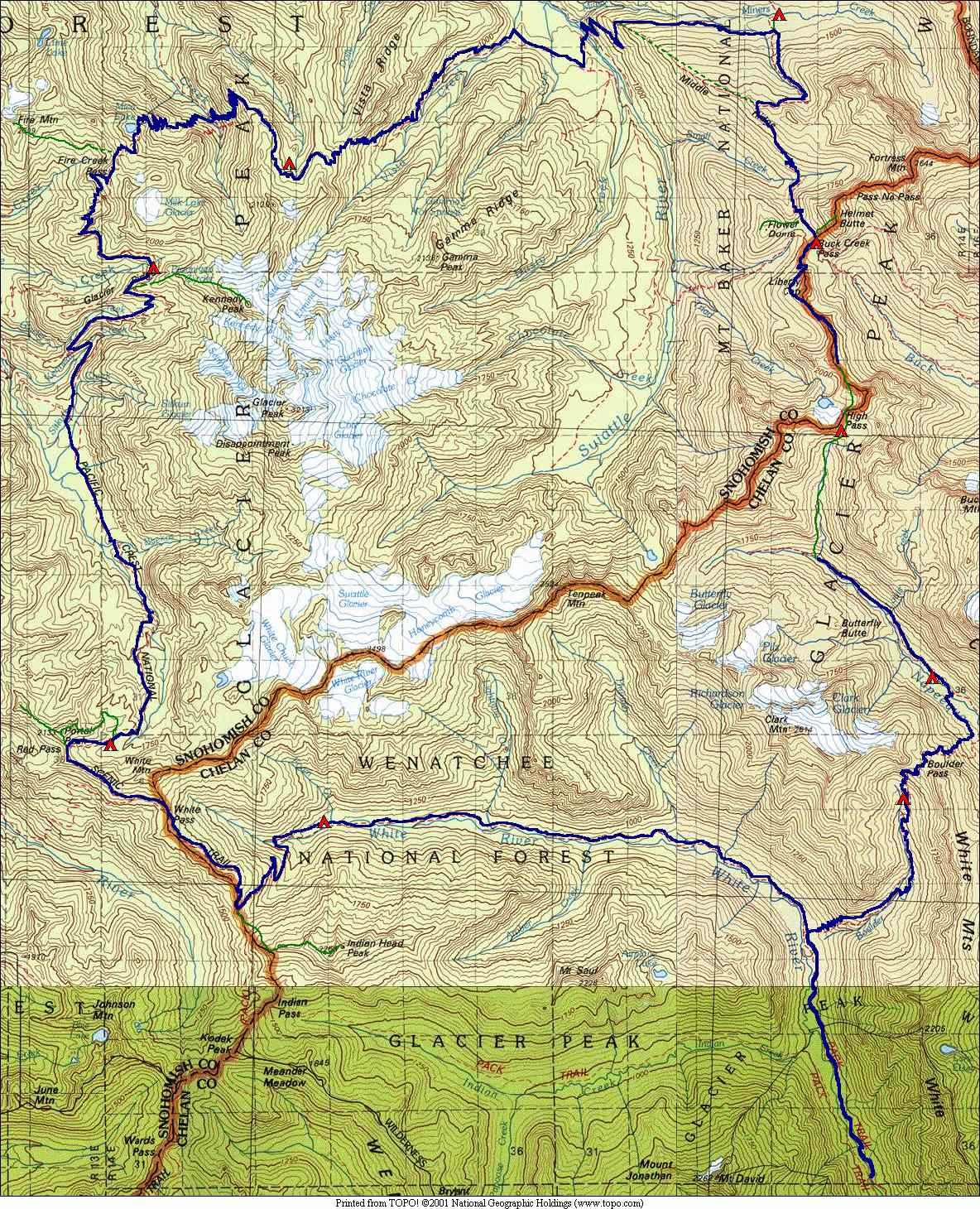