Photo: Skiing across Eightmile Lake with Peak 7828′ behind.

There is a well defined almost pyramidal peak to the southwest of Eightmile Mountain. On the Jack Ridge Topo it is unnamed. On the green trails Chiwaukum Mts map it is marked “7828”, simply its elevation. It is one  of the highpoints of Jack Ridge and looks inviting from many angles.

On 01/16/10 John Plotz, Will and I left the car at Bridge Creek, at the end of the plowing on Icicle Road. As dawn broke we skinned Road 7601 to the Eightmile Lake Trailhead. The snow had a firm crust from the Icicle Road to Eightmile Lake, so the ski to the lake was relatively fast.

As we skied across Eightmile Lake, we marveled that there are numerous peaks, couloirs, and ridges that remain unnamed in the Eightmile drainage. We caught our first glimpse of the day of Peak 7828′. We skinned alongside Eightmile Creek for a mile or so past the lake and then headed generally north toward the west peak of Eightmile Mountain and then west through a large delightful basin to Peak 7828′. At about 5,000 feet, the snow conditions changed from a thick rain crust to 6-plus  inches of powder that in areas that were not wind affected promised excellent skiing. After about 7 hours of near constant skinning, we were on the summit of Peak 7828′. Photo right and left: Working up the slopes of Peak 7828′ The summit snow was wind affected and steeper. Swirling clouds and sun breaks joined us for lunch. Then John skied off the summit to the southeast, first ski cutting the upper convexity and taking a couple of measured turns. John triggered a wind cross-loaded soft slab below the convexity that knocked him off his feet. Fortunately the sliding snow did not step down below the firm recent  crust, which was the bed surface of the slide. John was skiing with a whippet ski pole and utilized the pick to stop his slide.

Will and I were faced with a choice. We could ski off a ridge to the northeast and angle back, but that would expose John below if we cut something loose. Or we could ski the slide path. But first we would have to ski above the crown and hangfire to reach the area that had slid.  I was almost to the slide path when the hangfire broke. Nothing rained down on John, but the triggered snow was forceful enough to knock me over and release a binding. John and I were relieved that the other was just fine. Will skied the hard bed surface crust, retrieved a ski and pole that was above me. We regrouped. Collected, we now had about 2,500 of excellent powder skiing to Eightmile Creek. Enjoy it we did. It was dark by the time we returned to the car at Bridge Creek. In the end, the mountain with no name, Peak 7828′, not only gave us a great day of skiing, it also gave us an ample helping of humility.

Distance. Roundtrip distance of about 19 miles from the Icicle River Road and 13 miles from the Eightmile Lake trailhead. In winter this is a long daytrip or a more reasonable overnight trip.

Possible Activities. In winter: backcountry skiing and snowshoeing. In summer: peak bagging. Winter is a preferred time (the brush beyond Eightmile Lake will be covered with snow). The non-technical climb, however, is tackled by hikers who don’t mind wrestling with some brush.

Maps. View our topo map below for more information.

Note: Use ‘Print Preview’ to properly orient and scale the map to your printer.

Hazards. Avalanches. Know your shtuff (and your snow) if you ski or snowshoe the peak.

Uses Allowed. Snowmobiling (on the road), skiing, snowshoeing. Snowmobiling is only allowed about 0.75 miles up the Eightmile Trail.

Permits. None needed in winter and spring. 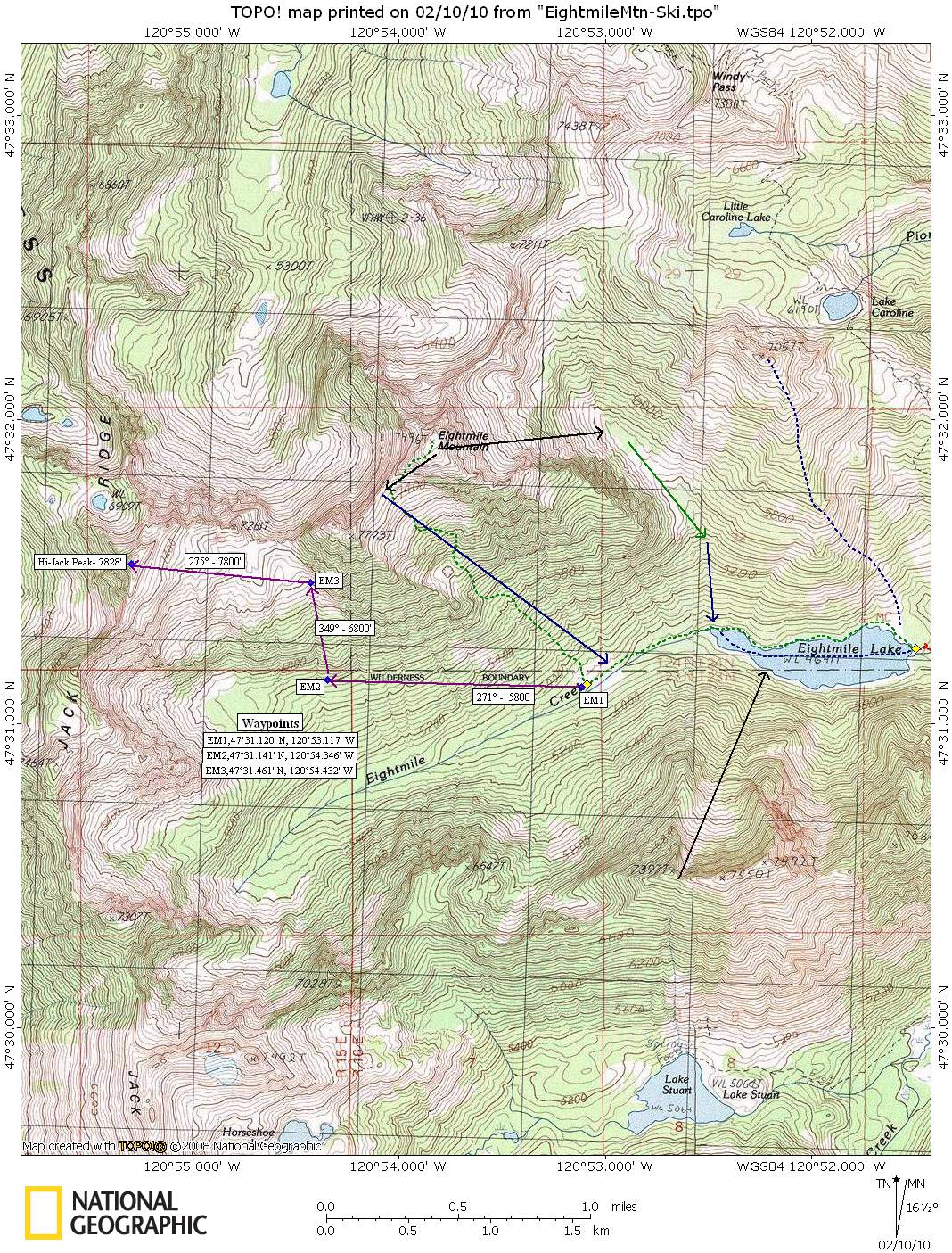