Poetic Pilgrimage: A good percentage of this route can be seen on the ridge out before Juli and in the drainage down below her.

Article and photos by Tom Janisch

In late July (2010) my daughter, Juli, was willing to join me on this hike. We drove the Little Wenatchee Road to the Poe Mountain Trailhead. By 8 a.m., we were hiking. The day was forecasted to be hot, but the trail, with its western aspect, gave us shade for the uphill hike. Before long, we were atop Poe Mountain. At one time, there was a lookout cabin here, but now only a few remnants of that lookout remain.

We enjoyed the panoramic views. Would Edgar Allan Poe have written such morbid poems if he had actually spent time here? I looked for a raven or a crow but found only views of wildflowers and serrated skylines. It was time to keep moving, we had many miles to go if we were to complete the ridge route.

We headed north (generally following the Wenatchee Ridge marked on the Benchmark Mtn Green Trails Map). Approaching Longfellow Mountain, I thought of his famous poems: Paul Revere’s Ride and Children’s Hour. Would he have had another famous poem in him had he walked over the peak now bearing his name? We walked west along a faint trail and, in the interest of time, traversed below the actual summit.

Onward we went. Perhaps because I always had an eye out the window toward the Cascades during my school years, I could not place any of Bryant’s poems. After I returned and performed an Internet search, I discovered he penned a poem called The Gladness of Nature. Its descriptions fell short of the actual beauty experienced atop Bryant Peak.

We traversed just under the summit of Bryant Peak, savoring the high alpine meadows. Then we traversed steep heather slopes where we startled a black bear. It was close and rose on its hind legs to inspect us. I yelled and vigorously waved my arms to scare it. I was glad Poe never wrote a gruesome poem about the black claws of black bears, which might have weighed heavily on my subconscious and affected the ultimate outcome of our encounter. The bear ran away.

North of Bryant, the ridge crest rounds out and a better trail followed this crest. We traversed the ridge to Kodak Peak named, I’m sure, for the rolls of film that have been shot from this scenic outlook. Juli savored the views and I savored the time with my college-aged daughter whose moments with her parents are increasingly crimped.

We descended to Meander Meadow and then continued to lose elevation as we walked down the Little Wenatchee River Trail. Along the way, we kept looking up at the ridge above us and remembering the different viewpoints we had hiked over earlier in the day.

After 10 memorable hours of walking, we returned to the car. And I returned with an answer: I knew now the poet peaks were not named after visits paid by famous persons but, rather, from the possible poetry these places could inspire. Photo Right: One of many shabby views of  Glacier Peak

Access:  Take Highway 2 to Cole’s Corner (14 miles west of Leavenworth), then follow Highway 207 (Lake Wenatchee Highway) about 4.2 miles and, shortly after crossing the Wenatchee River, go left at a Y. Go another 6 miles along the north shore of Lake Wenatchee and, at the Y with the White River Road, hook left staying on the larger road. Drive roughly 16.5 miles farther heading up the Little Wenatchee River, and following signs for Forest Road 65 and the Little Wenatchee Ford Campground. A Northwest Forest Pass is need to park at this campground where the trailhead is located.

Instructions. Hike Trail # 1520 up Poe Mountain then follow the ridge system in a northerly to northwesterly direction over Longfellow and Bryant peaks to Kodak Peak. On the first five miles of this ridge walk follow the route of least resistance by sometimes staying on the ridge, sometimes traversing below peaklets and peaks along the crest. Most of this portion of the route has a small trail to follow but sometimes the trail disappears and you walk cross-country for short periods of time. About 0.75 miles beyond Bryant Peak, follow a larger, established trail along the crest heading toward Kodak Peak. It’s worth going to the top of Kodak Peak for the Imax views of Glacier Peak, then follow the trail into Meander Meadow. From the meadows, follow the Little Wenatchee River Trail (#1525) back to the car.

Special gear.  In late spring and early summer, bring aluminum crampons (or MicroSpikes) and a lightweight ice axe for snow encountered along the route. Once the route is snow free (usually by mid July), trekking poles will be appreciated on the ridge crest. Juli did the route using running shoes and I used approach shoes. Camping and Bugs: This would be a fine multi-day trip. As of the end of July in 2010, there were occasional patches of snow along the ridge that could provide water for overnight camping. This year these snow patches will probably persist throughout August. Bugs weren’t a problem on the ridge but they were out and hungry as we walked down the Little Wenatchee River Trail. Bring repellent! 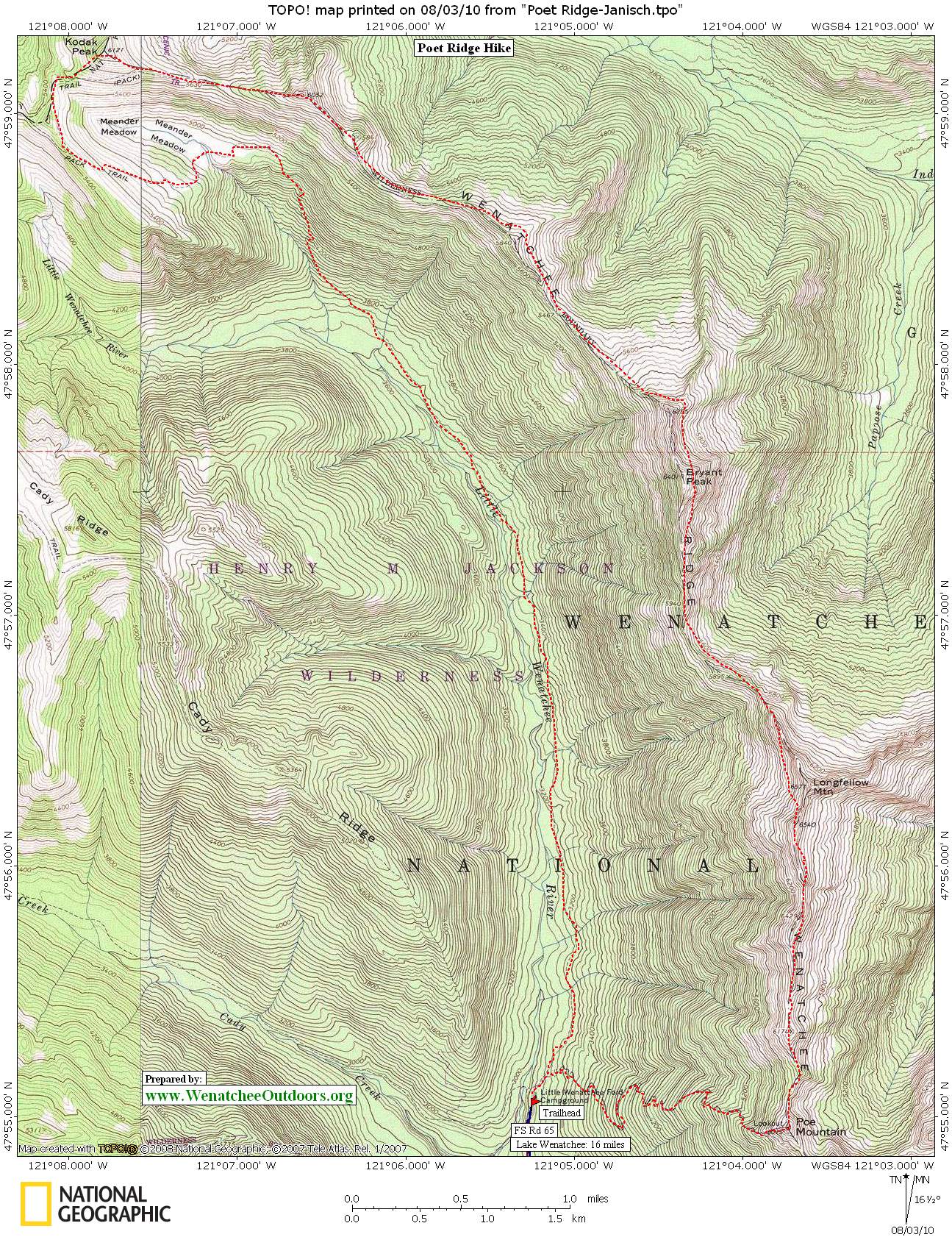