Photo: Miller Peak behind as seen from the southeast ridge of Iron Mountain.

“In spring the snow on all slopes will pass through a complete transformation between dawn and sunset…the charm of spring skiing is due to the high demands that it makes on the ski runner’s intelligence.”  — Sir Arnold Lunn

Late March and it’s forecasted to be a fair-weather weekend several days after fresh snow has plastered the highlands of Central Washington. That means we might encounter a menu of powder and corn if we’re clever, or a stew of crusts and cruds if we’re not.

So where has the afternoon solar activity been powerful enough to convert all the snow we’ve received into corn on sunny aspects and yet where is the air cold enough that shaded snow will remain dry?  It seems like a good weekend for Blewett Pass explorations.

On Saturday morning two of us leave the car at the turnoff for Scotty Creek/Old Blewett Pass Road at 8 a.m.  It’s early enough to escape the snowmobile traffic on the roads we will initially follow, late enough that when we descend we should find corn rather than ice on Iron Mountain’s southeast ridge.

The initial 3.5 miles of road is well frozen in the morning and we comment this will be brutal skiing if it the frozen ruts don’t soften later in the day. We leave the roads about an hour and half later and, after a little climbing through thick but passable second growth, squirt out onto our ridge system. Mountain music surrounds us with wind whistling through the giant pines around us and with a half-dozen white-headed woodpeckers drumming those same trees with the hammers of their heads. Superimposed over this is the mellifluous unmuffled whine of snowmobiles charging up snow-covered roads more than a mile away. Ahhh the rapture of being forced to enjoy the noise of pollution of others. Photo: Touring up the southeast ridge of Iron with the Wenatchee Mountains all around.

Our open ridge system, exposed to the cold vacuum of space at night, is still firmly frozen. Ski crampons snap in under our feet to make progress faster and safer. We move steadily upward enjoying the complex folds and the dendritic drainages of the neighboring hills. Around noon we top the ridge we’re following and, immediately upon stepping onto its north side, find ourselves striding through  a foot of powder. “Could  be  good,”  we comment to each other.

We make a short traverse to the cupola of Iron Mountain and summit the beast. The views here aren’t half bad – Miller , Navaho, and the Three Brothers are all plastered with new snow and strutting their white stuff. Our moods on this sun-soaked afternoon aren’t half bad either. Photo below: Looking north toward the Three Brothers.

Before long we’re ready to try some of the mountain’s north-facing fruits. We follow a shaded line downward through shin high fresh snow. Soon our slope hooks slightly to the east. If we stick to the very gut of the drainage, the snow is shaded and soft. But the alley we ski is narrow and,  if we round turns within a few feet of the sun-shadow line, the snow turns to trap crust faster than you can say “F…..alling!” Photo above and below: Having it made in the shade.

This brings to mind Sir Arnold Lunn’s comments from his book, Alpine Skiing at All Heights and Seasons, when as one of the first mountaineers to start skiing the high peaks of the Alps in 1908 he observed, “A clever (ski) runner will often find an oasis of good snow while the rest of the party–within a few yards of him–are struggling with crust.”

We practice being clever until our gulley emerges from the shade and direct sunlight armors the surface with a brutal crust. We traverse  into more direct sun light to reapply our skins in a warmer spot and, through luck rather than cleverness, discover that snow that has marinated in the sun for hours rather than minutes has corned up nicely. We postpone use of the skins and continue downward, enjoying the fruits of full sunshine almost as much as the fruits of deep shade.

A few hours later we’ve climbed out of our hole on the back side of Iron Mountain and are ready to descend the ridge system that brought us here. A cool breeze blows over the high ridges and the March sun is nearly colliding with the silhouette of Miller Peak. I look down on our ridge and wonder if Sir Arnold would give me poor grades: The foot of the ridge is already shaded and might be scabbing over with ice. And what about the lower road system: Might it be freezing into a chunky batter of ice cookies? A true snow master would have skied this ridge an hour earlier. We head down and the upper ridge, still bathing in the sun, skis like creamed corn. Beautiful. Half way down, the snow on the ridge crest is refreezing and breaks erratically under foot. Tricky. By dropping off the ridge and traversing the side hills forming the foundation of the ridge, we slip through soft west-facing slopes that are still catching sun. Crafty. Eventually we thread a short patch of tight trees dropping us back onto the roads. Pokey.

Although it’s shaded down in the bowels of the hills, it’s low enough that the warmth of a spring day is trapped by the bulk and the insulation of the surrounding forest. It may take another hour before this warmth is sucked out into black void of space. Where the road is flat, we skate over soft snow. And where the road is inclined, we rocket. Three miles flies by fast when gravitons pull you along by the belly.

At the car I’m congratulated for picking  a fine route. “You’re a snow genius,” my partner tells me.

Actually, I’m dishonest for accepting his praise. I’ve suffered through plenty of horrible days by misreading the conditions. Even today, Sir Arnold knows that it was good fortune rather than impeccable timing that provided quality skiing all the way back to the car. But the truth is so harsh — today I can live with being considered a genius. Access. From the Big Y Junction east of Leavenworth, drive about 12.5 miles south on Highway 97 to milepost 172.5. Take the Old Blewett Pass – Scotty Creek Road on the right (west) side of the highway and park. No permit required.

Descent Options. Reverse the ascent or follow the road system back down (our topo map shows the roads). Before heading down, consider skiing one of the north-facing slopes accessed from the top of Iron (see our map). Other. On weekends, a moderate number of snowmobiles do use spur road 7322-400 to access Iron Mountain.

Books. Sir Arnold Lunn (1888-1974), wrote dozens of books on subjects as varied as travel, politics, and religion. His best ski-related works include: Alpine Skiing at All Heights and Seasons, The Mountains of Youth, and Mountains of Memory. 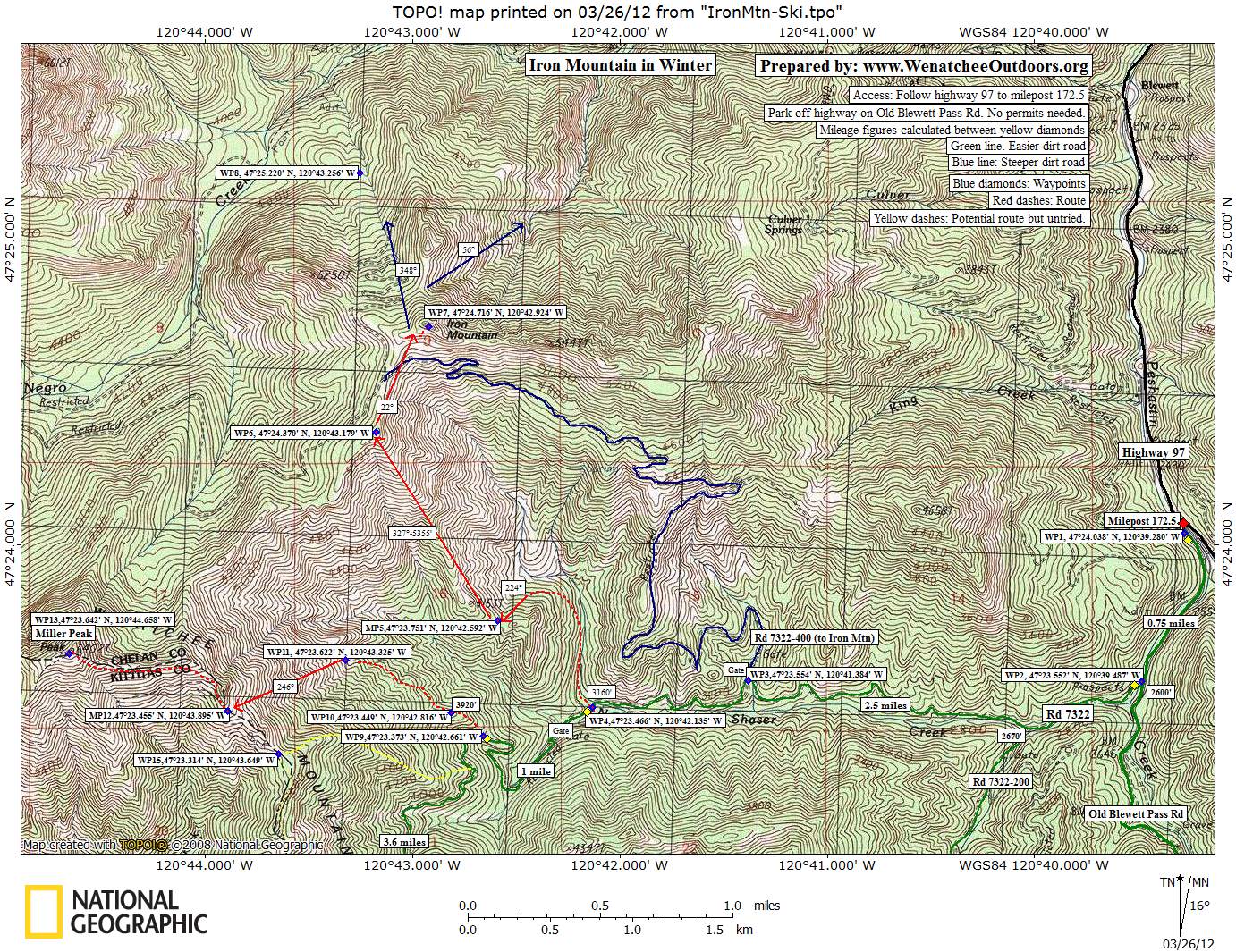