The events you are about to read are true; the names have been changed to protect the stupid…

Perhaps the forgotten skins were a sign. After all, without skins a ski tour designed for climbing is toast, dead, kaput. So there was Moe, at the start of the Smith Brook Road east of Stevens Pass sheepishly telling his two companions, “Bad news. I seemed to have forgotten something important.”

For a moment he wondered if Fate was whispering, “Go home, Moe. It’s not your day.”  But Fate in all her subtlety was overrun by the vocal Curly, “You know people working up at Stevens Pass. See if any of them can lend you a pair of skins.”

Out came the cell phone and a covert, ‘coffee-for-skins’ deal was quickly cut. Fifteen minutes later they were at the Stevens Pass Ski Resort where Larry accidentally discovered the screw securing the cuff of his boot to its bottom was gone. Again Moe thought Fate might be whispering, but he refused to listen. Off he went in search of skins while Larry went a’wandering to fix his delapidated boot. Both missions went smoothly and, even before the start of the ten-o’clock coffee break, the Stooges were enjoying a déjà-vu moment back at the Smith Brook Road.

Smug about his fortuitous network of connections, Moe started applying borrowed skins to boards while his companions waited. The skins were not only an inch too wide, they were a few inches too long for his skis. The clip-tail hardware of the loaners was going to jangle with each stride. Fate may have been whispering again, but Curly paid no heed. “Several wraps of duct tape around each of those suckers will fold all that junk out of harms way.” Out came the duct tape and, quick as a sloth, the trio was finally off.

Three miles up the Smith Brook Road everything was finally humming along swimmingly well. Here, the stooges branched off the main road onto the trail leading toward Union Gap. Their plan: Climb the trail a short distance, beeline to the SE ridge of Union Peak, tag the summit, and carve glorious powder turns through old-growth groves Curly had previously spied.

Larry, always anxious to motor, leapt out to the lead. Moe later remembered thinking Larry was contouring too much, but he didn’t worry—they’d climb steeper later. He and Curly talked blithely and followed blindly as Larry blazed. Larry’s lead struck them all as being uncharacteristically long but, after an unquantified period, they reached a flat meadow that seemed familiar. They gazed around: Yes, this was definitely familiar! This was where a bearing change was needed. Moe whipped out the map, plotted the next bearing, and took off on a course that would soon intersect the southeast ridge of Union Peak. The going was good and Moe thought, “This is very gentle—we’ve found an easier approach to the ridge.”

As expected, they soon intersected the ridge and Moe, now knowing exactly where he stood, turned left and strided toward the summit. Curly was puzzled. “I thought we needed to hang a right here.”

On they went and soon they were on a tiny peaklet at 5,420 feet. They were only a few hundred feet below Union Peak now but nothing matched their memories. Nowhere could they see that long northern ridge forming the bridge over to Jove Peak. The three stood there scratching hatted heads with gloved hands, totally lost in outer and inner space. Photo: Careful who you follow. When he brags about being a charter member of the CFCC (Cluster-Fword Climbing Club) think about blazing your own trail.

Different maps emerged from packs. Larry checked his nearly worthless Green Trails map. They weren’t on a green trail so he didn’t have a green clue about their whereabouts. Moe studied his 7.5-minute topo map and, given the glacial speed of his cognitive processes, couldn’t make heck out of the hay of their location. Curly, suspecting they had passed through a warp in time-space, pulled out a map of Argentina.

Different thoughts exploded like flares of possible illumination. “Maybe we contoured too far and came up on the southwest ridge…we need to double back.” ; “Maybe we didn’t contour far enough and we hit the southeast ridge sooner than we thought…we need to blaze forward.” ; “Maybe we passed through a warp in time-space…we need to ask the next Spanish-speaker where the heck we are.”

The mental gymnastics was finally warming the glaciers of Moe’s mind. He remembered those earlier voices wondering whether they were contouring too much and marveling over the gentle climbing. He linked these with the few visuals he could discern through the clam-chowder weather. Enlightenment struck: “We’re on the wrong ridge system.”

He explained how Larry originally contoured west rather than climbed north: This would have brought them skinning under Union Gap rather than climbing above it. The flats where they reoriented were not those near Union Gap but those bordering the next creek south. “We’re on this peaklet above Dow Lake,” he said, smudging the map with his wet glove.

“No way!” Curly objected, grabbing the map. “We’ve got 70 years of experience between us. There’s no way we’re that inept.” He kept studying the map and the view before him, trying to shoehorn the little he could see into what he wanted the map to say.  “If we’re not on the ridge between Union and Jove peaks –or in Argentina—I’m changing hobbies and enrolling in cosmetology school.”

“The peak your calling Jove is this one,” Moe said smudging Peak 5,747 with a thump. “Let’s go ski the sucker. If the weather clears all will become clear.”

On they went sticking closely to the ridge and clumps of trees. Every time they stepped onto wide-open slopes, great WHUMPS resonated below as 15 inches of new snow settled down and squashed a buried, inch-thick layer of old hoar frost. Photo: These hoar frost crystals are pretty…until they’re buried. Then, they provide a weak layer that slabby snows will slide on.

A few minutes before the summit, Fate, humored by such endearing incompetence, relented. She temporarily lifted the enshrouding curtain of clouds. A good mile behind them the pyramid of Union Peak poked the sky, down below them Dow Lake occupied a micro cirque. Curly acquiesced and wondered aloud whether he should specialize in nails or lashes once enrolled in beauty school.

The clouds settle back in while the stooges settled on a safe descent—an avalanche, they agreed, was not the recommended dénouement to the day’s misadventures. Sticking to the ridge with its wind scoured rocks and spindly krummholtzes, they linked turns between pillows of powder, patches of ice, and slabs of styrofoam snow. Glorious. They moved from exposed ridges into old-growth woods. Here conditions vacillated between deep snow with a breakable surface crust, and shallow snow with a hard underlying crust. The stooges rocked unsteadily on skis that were sometimes submarines, sometimes rockets.

Photo: Not every turn of the day was terrible.

Back at the Smith Brook Road, Larry asked whether they should make another circuit, this time up the real Union Peak.

“Doesn’t it feel like we’ve been guided away from Union all day?” Moe countered. “Maybe we should listen.” Agreement was quick and unanimous. They turned the boards toward home and glided out of the mountains. Despite the synergy of their stupidity, they would live to ski another day.

Photo Disclosure: The first picture was taken on the Smith Brook Road. The others were taken on nearby routes on other days but accurately depict the ‘feel’ of the day.

Attractions. The Green Trails map identifies Peak 5,747 as Mount McCausland. It’s a beautiful perch above Lake Valhalla with magnificent views of Lichetenberg, Union, and Jove peaks. Not all slopes up the peak are benign, but a good route can avoid most hazards and provide a fun outing even when there’s moderate to considerable slide hazard. In safe conditions, a variety of descents are possible both north and south off the summit.

Note: Use ‘Print Preview’ to properly orient and scale this map before printing.

Access. Drive Highway 2 east of Leavenworth toward Stevens Pass. Park on the north side of Highway 2 at the long, wide plowed area just east of Smith Brook Road (milepost 68.8).

Hazards. There’s plenty of avalanche hazard in the area, but our map shows a relatively safe route up and down the peak. 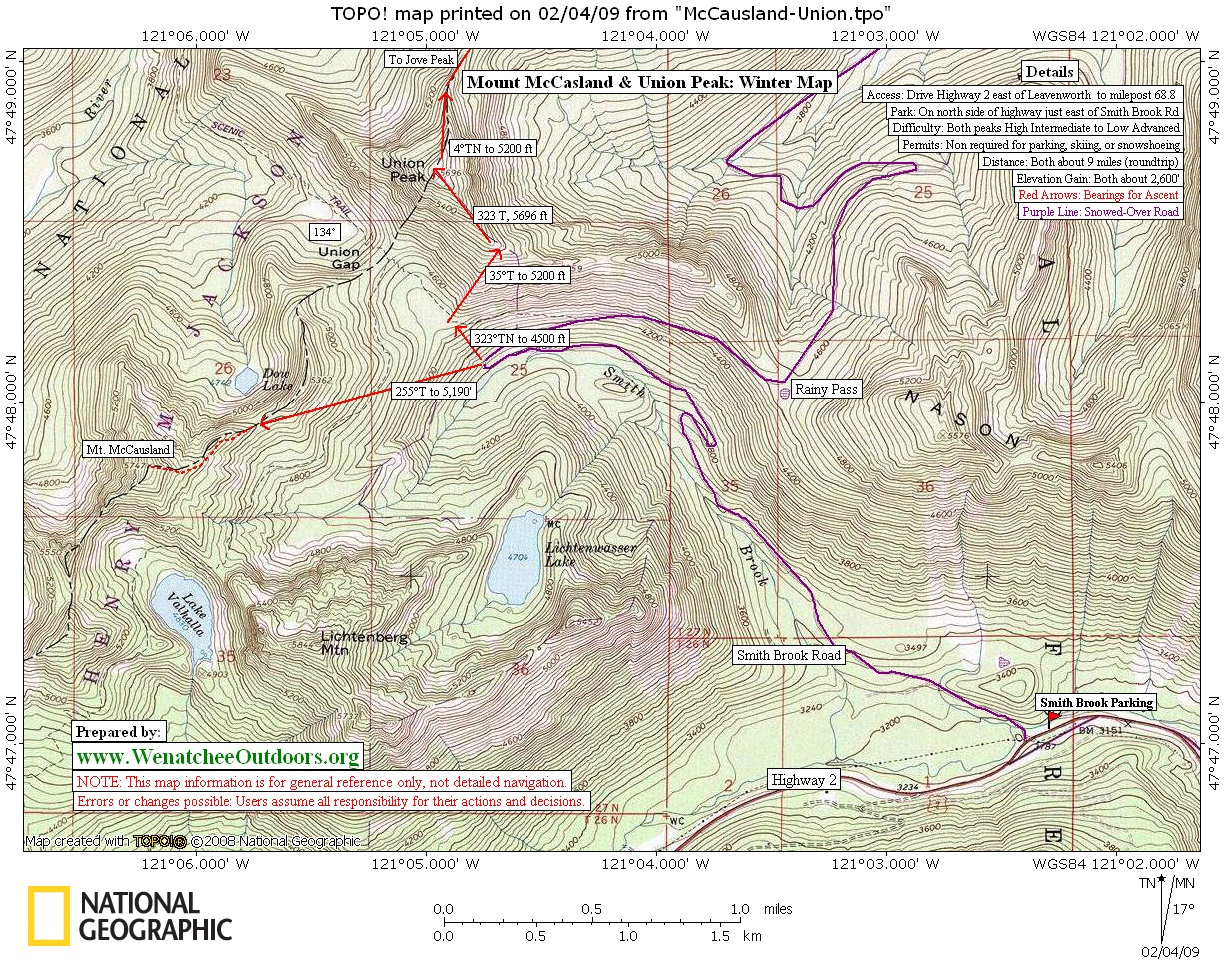