She gave her gifts of cold snow early, but with several weeks of Chinooks, rain, inversions, and high-pressure systems, La Nina has given us the warm shoulder of late. She’s been winter’s equivalent of an Indian giver. Friends tempt me to go mountain biking out in the Columbia Basin but this is the first weekend in February, and even though the forecast calls for a mixture of rain and snow along the Cascade crest, I refuse to give up on winter.

Given the forecast, visiting the sunnier, colder Blewett Pass environs east of the crest makes sense. With sun on the right exposures, conditions could be awesome. In all likelihood, however, the skiing will be awful. I call the few people I know who could care less about the conditions – if it involves skis, they’re interested. At 7:30 a.m. on Saturday, Tom Janisch and I leave the car and start skiing the Scotty Creek Road leading toward Old Blewett Pass. We discuss the fine line that sometimes separates awesomeness from awfulness. Right now that line doesn’t seem so slender – the snow is cement hard and rutted with deep snowmobile tracks. It’s no problem skinning up this mess, but without some softening the return trip promises to be positively awful. Reaching Shaser Creek, we turn right and follow roads making a westward run toward the foot of Miller Peak. Three and half miles farther along, we leave the road system and start climbing a small ridge that will eventually intersect the prominent East Ridge of Miller Peak. A short distance up this ridgelet a visual reconnaissance of the terrain reveals big avalanche slopes to the north that, once reached, yield a direct, open line upward. Given the day’s absence of avalanche hazard, we contour through thick forests and cross snows that are more pine needle than water to access those slopes. This is a dose of Cascadian awfulness – the green chastity belt – that so often protects the rewards of this range. Once we’ve unlocked the belt, seductive slopes lead directly upward. The slopes are firm and too steep to climb efficiently with skinned skis. Skis come off, crampons go on, and then Tom kicks steps skyward with metronome regularity. Almost in a trance, I ride the Janisch escalator to the 5700-foot level of the East Ridge where our summit pops into view. From here, it’s a 45-minute stroll to the top.  The steel sky overhead is breaking up and being pushed south by a blue tide streaming in from the north. Minutes after stepping on the summit, rays of sunlight offset the chill of the wind. Awesome. The awesomeness continues when we snap on skis and start the descent. On the climb our feet sometimes busted the crust and we sank to our shins in crystalline snow. Initially we wonder whether such collapses could precipitate a tumble that would send us tobogganing downhill on our bellies at high speed. A few minutes into it, however, we’re confident the skis will remain on the surface. We start skiing more aggressively Our passage sounds like planks getting dragged over asphalt, but the skis turn easily and the textured snow holds our edges. As we plunge downward we lap up the scenery, the quality of this slope, and the actual quality of the skiing. Two thousand vertical feet lower, awesome conditions turn ugly as we renegotiate the needled, forested traverse leading back toward the roads.

It’s midafternoon by the time we reach the valley floor and intersect those roads. What might normally be a gentle glide downward is, today, a snowmobile-churned, ice-encrusted luge course. We rocket down four miles of road well aware that we’ll either reach the car fast or break a clavicle when we pile up. Riding the razor’s edge between exhilaration and terror I can’t quite decide whether this final plunge is awfully awesome or awesomely awful.

Hazards.  At the wrong time,  parts of the route have a fair amount of avalanche exposure. There’s also considerable cross-country travel so you’ll need to be a competent navigator.

Access: From the Y Junction between Cashmere and Leavenworth, follow Highway 97 south for 12.5 miles. At milepost 172.5, veer right onto the Old Blewett Pass/Scotty Creek Road, which is plowed for about 100 yards. Snowmobilers use this road and need room at the end of the plowed section to get their trailers turned around. Parking away from the turn around (closer to Highway 97) will keep their Sierras from denting your Subaru. No permits are needed to park here. Equipment. Besides the normal backcountry kit, carry ski crampons and crampons for your boots.

Allowed. Snowmobiles and ATVs are allowed on the road system.

Leave It Better than You Found It: This should be every user’s goal. Leave no trash and pick up trash left by others.

Disclaimer. Treat this information as recommendations, not gospel. Conditions change and those contributing these reports are volunteers–they may make mistakes or not know all the issues affecting a route. You are responsible for yourself, your actions, and your safety. If you won’t accept that responsibility, you are prohibited from using this information. 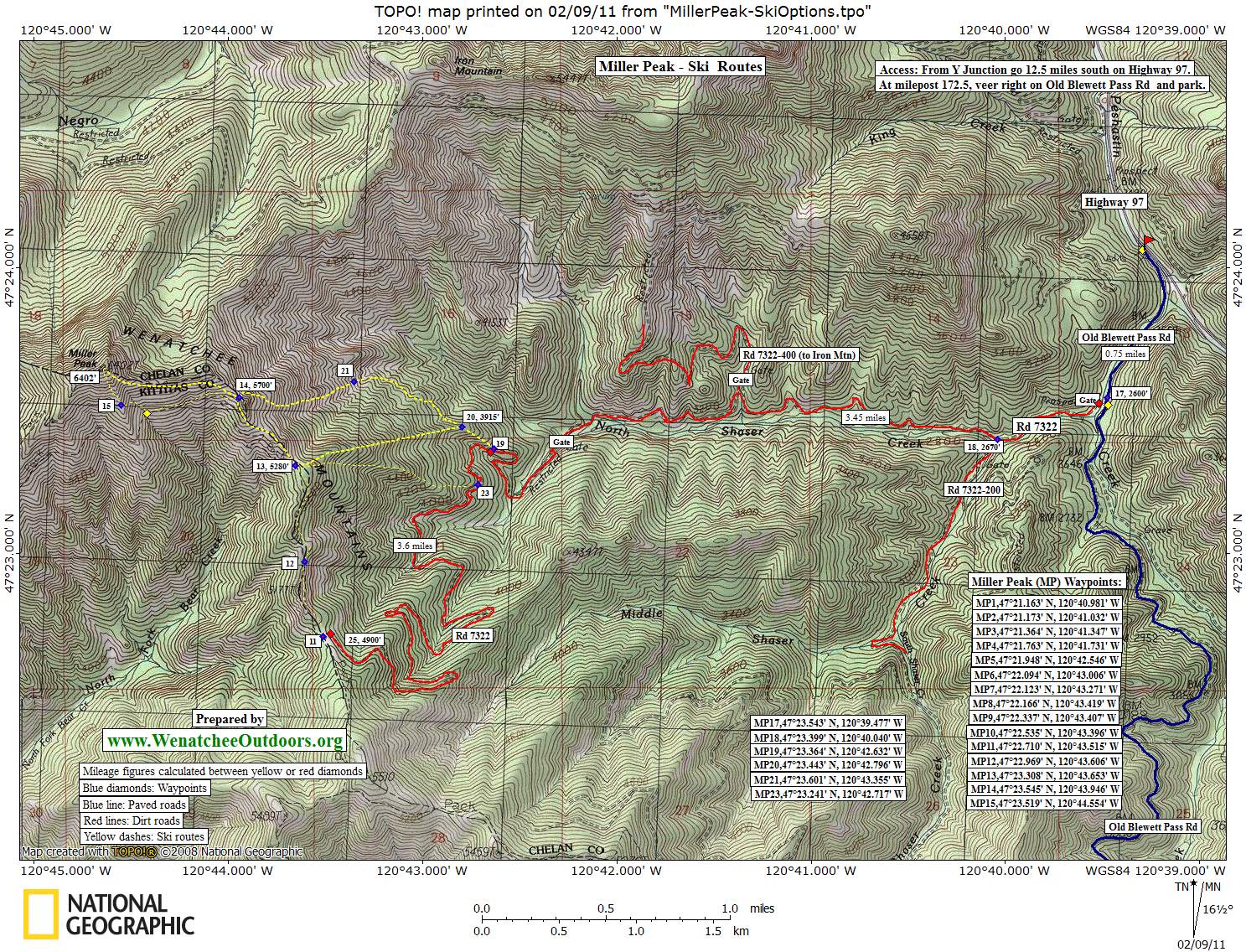