It was the college graduation season of mid-May when we arrived at Washington Pass to try this tour. I was thinking about my youngest daughter — I’d be attending her college graduation ceremony the next day. I was thinking about how the absence of college tuition bills might allow for the purchase of some new ski gear … basic stuff like the replacement of my tattered ski pants and holey socks. I wondered what my daughter would do next. Soon she would be forced from the nest of the familiar and face the unknown. Looking over at Spire Gully area of the Birthday Tour (slopes in middle of photo) from the Graduation Tour.

These thoughts seemed consistent with the agenda before us today. Here we were at a familiar place, the start of the Birthday Tour, graduating onto something new, more difficult, and unfamiliar. Through a little map study we’d conceptualized a route taking us over and around Kangaroo Ridge, through several steep gaps, and eventually up Wallaby Peak. Some of the ground was steep and map study couldn’t adequately answer whether a 30-foot cliff interrupting a gully or a cornice capping a narrow gap might stymie our efforts. Furthermore, given the low snow totals this year, map study couldn’t say whether a shortage of snow might make parts of the route vegetatively vile. So on this Saturday I felt some of the excitement and disquiet I suspected my daughter would be feeling the next day. Off we went. An option for crossing Kangaroo Ridge as far north as possible was dismissed because a shortage of snow made the start of that route a suffering of saplings. We headed farther ups of Early Winters Creek to eyeball another notch that could vault us over Kangaroo Ridge. This time both the approach and the top looked viable. With the frozen snow of early morning under foot, we packed away the skis, pulled out crampons, and kicked steps skyward for nearly two hours

At our notch we found neither cornices nor cliffs on the far side. Instead east-facing, sun-softened slopes dropped us down a spectacular bowl whiskered with larch trees.​ One of several gaps the route passes through.

Next we skinned and then booted up steep slopes taking us to a tiny col in a ridge separating us from the mainstem of the Cedar River. Again, I worried that the far side of the col could be craggy. It was craggy … yet one narrow finger of snow dropping straight down threaded the rocks and connected us to gladed slopes. All of it was skiable and ski we did — down to the 6,000-foot level. The climbing skins were re-applied and up we went to a more prominent gap. Here, we contoured slightly then started climbing straight up to the summit of Wallaby Peak (Peak 7,995’). The corn snow covering these steep slopes peeled disconcertingly under our skinned skis, so we shouldered the boards, uncorked our ice axes, and slowly kicked steps up to the summit. And what a summit it was: We looked down on a solar system of rock towers around us and out over a galaxy of snowclad peaks in the distance.

This pleasantry was followed by an even greater one — 2,000- vertical-feet of steep skiing down into the headwaters of the Twisp River. One last short climb delivered us to Kangaroo Pass, a place we knew from our previous circuits of the Birthday Tour. Finally, supeb turns through California-like corn snow made quick work of the descent that returned us to Highway 20.

Back at the highway, we popped off the skis while we raved about this day that had such fine and pleasant variety. While we raved, an acquaintance glided down the slopes and pulled to a stop beside us. “Didn’t know you guys were out here today,” he said, giving us a hand shake. “You just finishing the Birthday Tour, too?”

“No.” I told him. “Finally we’ve graduated to something new.”

Access. Drive Highway 20 about 16.5 miles east of Mazama (or 0.9 miles west of Washington Pass) to the distinctive “hairpin”: turn (switchback) in the highway. Park at (or near) this turn in a A few of the many beautiful walls and towers passed along the way.

plowed pullout. No permits are needed to park here.

GPS. Download a GPX file with the waypoints on our map.
​ Permits. None needed.Hazards. Parts of this route will avalanche or can be overrun by avalanches when the hazard us high. You will also be exposed to some cornice hazard. It’s up to you to determine when snow conditions allow for safe travel of the route.

Equipment. Ski crampons, boot crampons, and an ice axe are all recommended. 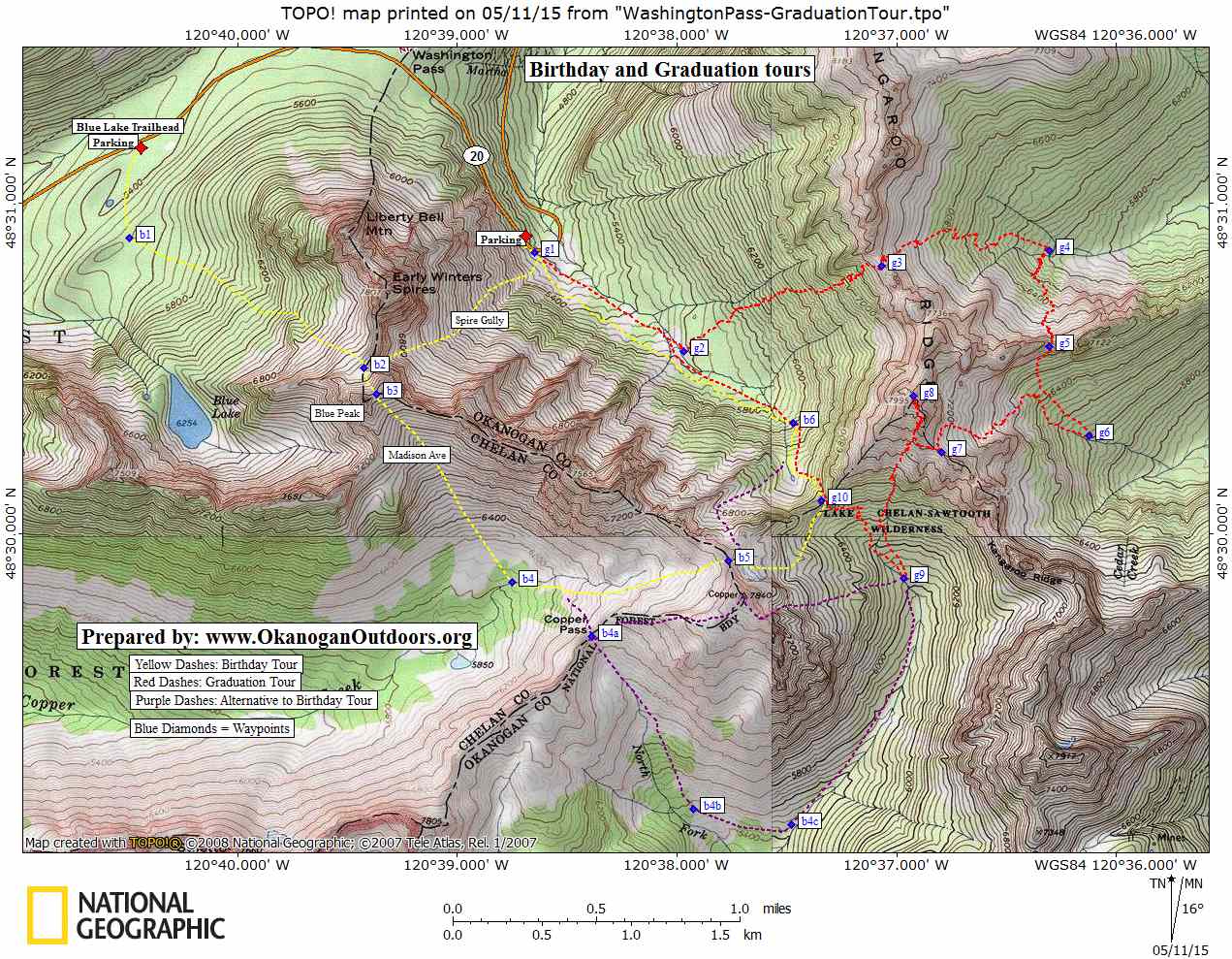