Story and Pictures by Andy Dappen
They are intrigued about spending the summer solstice circumnavigating Mt. Baker on skis. In concept, I’m with them but the drive is ugly long and the forecast for that great white molehill is ugly wet. “What about skiing Frisco Mountain?” I suggest. I know Frisco will provide adequate snow for solstice skiing, the drive will be beautifully short, and the forecast, while not exactly resplendent, is beautifully better than Baker’s. They agree beautiful is better than ugly and to Frisco we go.I’m not exactly favored company when a light rain and thin cloud cover grace Rainy Pass at 6:00 a.m. as we launch, but the sky is lightening to the West and hope springs eternal as we ski away from the car on a carpet that is more pine needles than snow. The snowpack grows and the clouds thin as we climb, and even though we must carry skis across a south-facing slope near Heather Pass, we find ourselves to be happy summer skiers. We ski on to Maple Pass entirely on snow, carve turns down Maple Creek, and then traverse and climb toward a notch in the southwest ridge of Frisco. Again, skis are carried for a few minutes where the summer sun has overpowered the winter snow, but walking through fields of glacier lilies is beautiful consolation for shouldering skis.

By late morning we have skied to the rock pyramid capping Frisco Mountain. We enjoy lunch at snow’s end and debate whether we should brave the exposed third-class scrambling ahead in ski boots. We decide to give the scramble a look and, after the heart palpation of edging along trashy rock in clunky boots, find ourselves on top.

On the return to Rainy Pass we look for route options that completely avoid shouldering the skis. We are, after all, skiers. We climb over a notch in the North Ridge of Frisco and enjoy a dreamy run down the vanilla slopes paralleling the Lyall Glacier.

The skeptic amongst us thinks we’re about to get sucker punched with the need to hike skis up to the divide between Lake Ann and Rainy Lake. The map, however, indicates we’ll find an east-

facing ramp upward that the optimists among us believe will be snow-covered. The optimists are right. We climb on skinned skis back to the scenic divide where our heads spin on swiveled necks taking in the craggy sentinels of the area.

The sky is blue now and Black and Corteo peaks, in particular, rise above us flexing their muscular profiles. We can see that the white blanket covering all of this, like an elder’s hair, is thinning, but there are still enough ski lines out there to keep us busy for several more days. Corteo Peak on left, Black Peak to the right.

It’s a moment when the benefits of solstice skiing are blatantly obvious. The summer sun is warm and one of my ski companions stands beside me in a T-shirt. Our packs are smaller and decidedly lighter because we carry fewer layers of clothing and the avalanche rescue tools that are standard equipment for winter tours are unnecessary on slopes of moderate angle given the consolidated snow conditions. And, of course, there are the nearly endless hours of daylight available to complete long tours.

From our divide we decide to ski the steep north-facing slopes dropping directly into Lake Ann. We know the line will go if we hit it right but it’s easy to get cliffed-out as well. “What time is it?” one of my companions asks. T-shirt skiing, lighter packs, longer day… what’s not to like about solstice skiing?

“Not a big deal if the route doesn’t go,” he replies. “If we get skunked, we still have six hours to climb out and find a mellower way down.”

I take a last look over the cirque confining Lake Ann and can’t find a single ski track indicating others have visited this easily accessed area over the past few days. It’s one of those imponderables: The benefits of solstice skiing may be large, but the crowd enjoying it is not. Touring toward Frisco Mountain (behind) with the larches of summer turning green with envy.

Skill: 2 (intermediate) to 3 (advanced) depending on the objective chosen.

Fitness: 2 (intermediate) to 3 (advanced) depending on the objective chosen.

Access. From Winthrop, drive State Highway 20 about 36 miles west to Rainy Pass (Milepost 157.5) and park in one of the pullouts on either side of the highway. A Northwest Forest Pass is required during hiking season once the main parking areas are snow-free.

GPS: A GPX file with the waypoints noted on these maps can be downloaded to smartphones or GPS units from this thread at the WenatcheeOutdoorsForum. 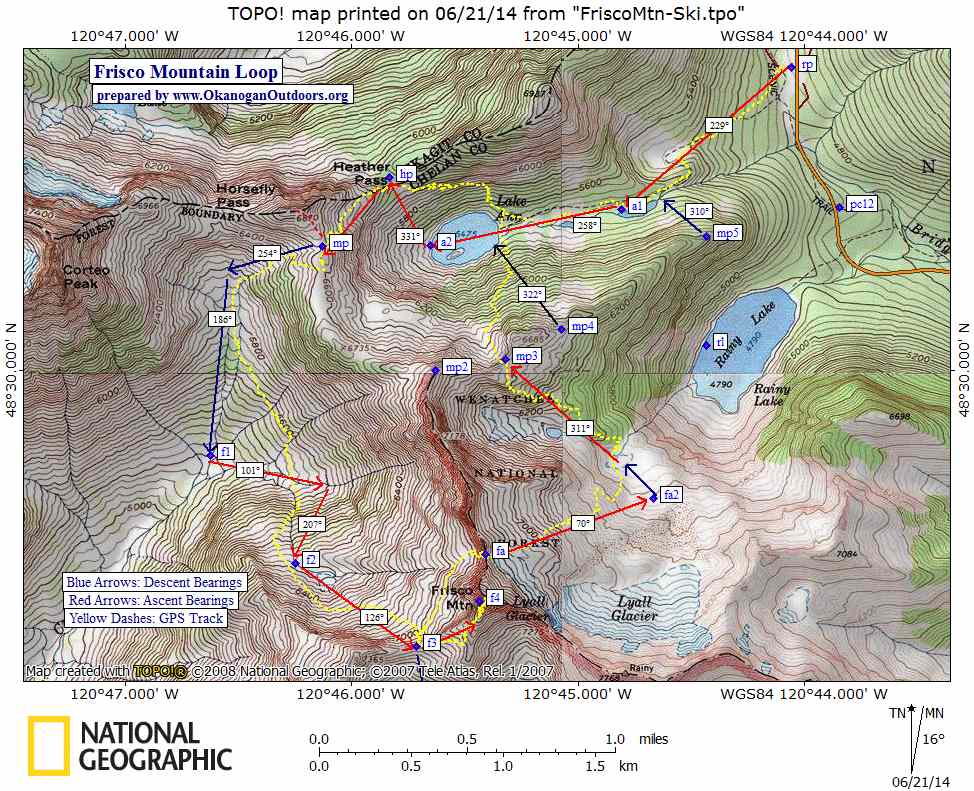 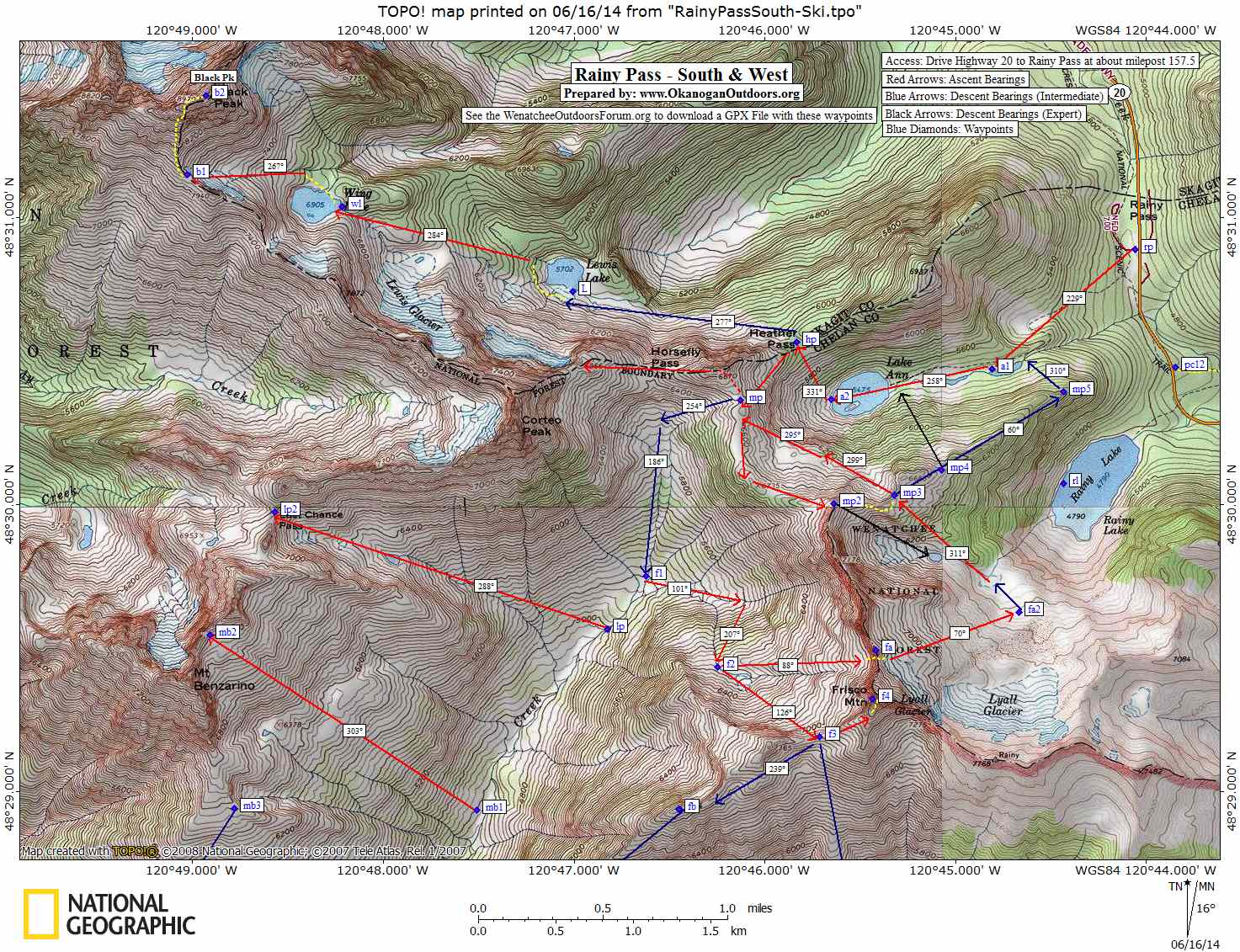