Despite the quality of its granite and the length of its routes, Snow Creek Wall has a limited season when the climbing is truly great. From June through August, it’s typically way too hot on this wall with its southeastern exposure. If you climb earlier than June, you’re likely to lose a pint of blood to ticks.

Autumn is absolutely the best season to climb on Snow Creek Wall and, in 2008, I got obsessed—by early October I had been to the wall a half-dozen times getting ready. The ultimate goal of my obsession? Tick-off four or five long lines — Outer Space, Iconoclast, Hyper Space, Mary Jane Dihedral, Orbit — in a single day. Of course, the downfall of fall is that the days are short–that makes a monster link-up particularly challenging.

When Pat and arrived at the base of the SCW early on the morning of October 19, it was my eighth visit of the season. We started up Outer Space at 7:30 a.m., fully intending to complete at least four routes. I have the utmost confidence in Pat’s abilities, so we agreed to simul-climb the first two pitches up to Two-Tree Ledge. With frozen fingers, we headed up the Remorse start of Outer Space (OS), shaking out the cobwebs and trying to get in rhythm. Within 20 minutes we were at the large ledge below the infamous traverse. Pat led this and it proved to be the only pitch we would belay. From his belay, I grabbed the rack and slings, and sprinted off for the top. We simul-climbed pitches 4, 5, and 6–pitches known for their sinker handjams. We didn’t stop moving until we were at the rappel station at the top. Arrival time: 9:30 a.m. (2 hours)…about what we expected.

We trailed a 7-mil, 60-meter rope for rappels knowing that three, double-rope raps down the edge of the Shield gets you down to Two-Tree Ledge. We then scrambled over to the “regular” start of Outer Space, and rapped a stretchy 59 meters to a point where some mandatory fourth-class downclimbing gets you to the bottom of the wall. We chose to rappel to save time and energy. After this day, we were convinced that the rappels were an improvement over the loose, knee-jarring, walk-off route.

We hydrated a bit, me with Classic Coke, Pat with a more thoughtful drink of Zip Phizz and water. At 10: 15 a.m., we repeated the Remorse start to One-Tree Ledge and the base of the 5.11 Psychopath pitch. I’ve led this pitch four times this fall, and today it showed. It took about 10 minutes to lead. We swapped leads, with Pat drawing the cruiser pitch, and me getting the thought-provoking 5.10c corner just below the start of Hyperspace. With the day’s sense of urgency, I didn’t give myself time to think about the difficulties. A rapid 50 meters later, I clipped the chains, put Pat on belay, and quickly brought him up.

When he reached the belay, Pat was winded and his forearms were pumped. I too had felt my right bicep begin to cramp. Hyperspace would have to wait. Pat led the next 5.10c Iconoclast pitch out onto the shield and up to Library Ledge, as well as the last fun pitch of OS. Then, with a little simul-climbing, we were back at the top. Elapsed time for this ascent: 3 hours. Once again, we rapped the wall: Tie knot, thread rope, rap about 55 meters, repeat, repeat repeat….

At the bottom, the sun had already moved behind the wall and the air was chilly. I downed some quality power food — more Coke and Safeway Chocolate-Chunk cookies — and my psyche was suddenly restored for the Mary Jane Dihedral (MJD).

The MJD, at 5.9, is a stiff rating for a steep route, with tricky pro. The route also has a little loose rock and plenty of ambiguous routefinding. I’ve climbed it twice before and Pat’s been on it once, so the routefinding was not a non-issue. But our tired forearms and waning concentration were issues—it was hard for us to stay in-the-moment on a demanding route.

The first pitch of MJD ends at a reasonable stance. After this, the stances involve more hanging and discomfort. By the time we reached the last dihedral pitch, we were moving quite slowly and knew that knocking off Orbit was not in the cards. We would need to be content with a Hat Trick – a four-play day would have to wait until spring.

Pat led beyond the 5.9 overhang capping the final dihedral, and then I sprinted up the large chicken heads that merge with Orbit near the top. We did some careful simul-climbing and reached the rap anchors at the top after about 3.5 hours. Light was waning, and we wanted to avoid doing these long raps in the dark. We rushed.

By the time we reached the last rappel anchor, it was almost bat-cave black and, silly us, we had no headlamps. Carefully we tied knots and threaded ropes through our rap devices. Even though we were apprehensive as dark consumed the rock around us, I enjoyed looking out over the lights of Leavenworth and down on the bobbing line of LED lights as hikers streamed out of the Enchantments. We touched down at the base of the wall in total darkness relieved and, surprisingly, not too tired.

That gave us reason to be optimistic about completing a four-play day. But to do in late spring or early summer when the days are long leaves us with an odious choice. Do we want heat or ticks?

More info: The best detailed sources of climbing information about these different routes include Leavenworth Rock by Viktor Kramar and Selected Climbs in the Cascades Volumes 1 & 2 by Jim Nelson and Peter Potterfield. This topo of Outer Space is from Selected Climbs 1, which also has an excellent topo of Orbit. Selected Climbs 2 has a good topo of Hyperspace whose bottom portion is made up of Remorse, Psychopath and part of Iconoclast. Finally make sure see our link: Snow Creek Wall – Selected Climbs for pitch-by-pitch descriptions of these routes.

Access: Park at the Snow Creek parking lot 4.25 miles from Icicle Junction (intersection of Highway 2 and the Icicle Road on the west end of Leavenworth). Hike up the Snow Creek Trail for 2 miles then branch right on a climber’s trail, cross the creek on logs. Hike up boulders and talus and then find the continuance of the climber’s trail that ascends roughly 500 vertical feet to the base of the wall.

Descent: Most climbers walk-off the routes by trending climber’s left at the top and following gulley systems dropping to the south or southwest. This is a moderately long and tricky descent with loose scree and some exposed, third-class scrambling. If you decide to descend as described in this article, bring a 60-meter rappel rope.

Map: See our topographic map (below) to the Icicle for finding different crags.

Permits. Northwest Forest Pass needed to park at the trailhead.

Photo by Tom McMacking from a 1976 guidebook to the area by Rich Carlstad and Don Brooks. 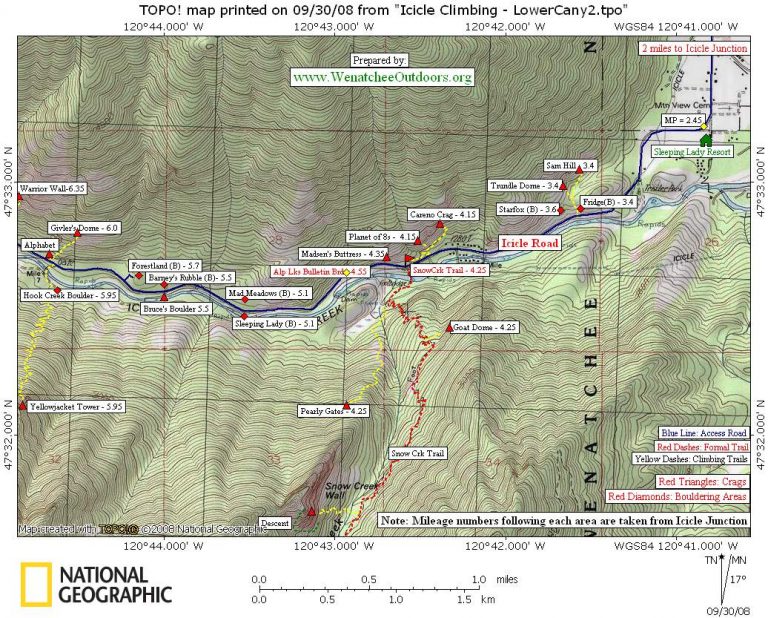