Photo: Diamond Head as seen from the Wenatchee Crest

Want a taste of what the scenery along the Hog Loppet route is like without actually cross-country skiing or snowshoeing  that 19-mile route? Then ski or snowshoe the Wenatchee Crest west of Blewett Pass along Spur Road 800 of Forest Road 7324. This high, snowed-over road follows a ridge system forming the Chelan-Kittitas county border.

Besides the novelty of being two places at once (in both Kittitas and Chelan counties), on a nice day you’ll get airy views out toward Mt. Rainier to the south, Glacier Peak to the north, the Enchantments to the west while all around you are the complex folds and drainages of the Wenatchee Mountains. It’s as beautiful as (or maybe even better than) skiing the Hog Loppet.

Fitness: 1 to 2 depending on distance traveled.

Access.  From the Y-Junction, follow Highway 97 south to Blewett Pass. Just beyond (west of) the high point of the pass park on the north side of the highway (SnoPark permit required).

More information: This road system is not groomed although it’s not uncommon to find the tracks of other Nordic skiers and/or snowshoers. See this link for more information for additional guidebook information. Additionally, Ellensburg XC Ski Club have directions and another topo map of their own here.

Map. See our topographic map. The route starts at Blewett Pass and the beginning portion is north of the highway and noted as a red line. After 0.6 miles, the remainder of the route (the part in the voluntary non-motorized area) is shown as a green line.

More Snowshoeing: Maps and details of over 80 regional trips in our on-line guidebook. Leave It Better Than You found It: This should be every outdoor user’s goal. Pick up trash others have left behind, pull noxious weeds along your route, disperse fire rings found at campsites (they encourage more fires), throw logs and branches over spur trails and spurs between switchbacks (make it harder to do the wrong thing than the right thing). IMPORTANT DISCLAIMER: Treat this information as recommendations, not gospel. Things change and those contributing these reports are volunteers–they may make mistakes, fail to give complete information, or may not know all the issues affecting a route. So forget about finger pointing: If things go wrong, you are completely responsible for yourself and your actions. If you can’t live with that, you are prohibited from using our information. 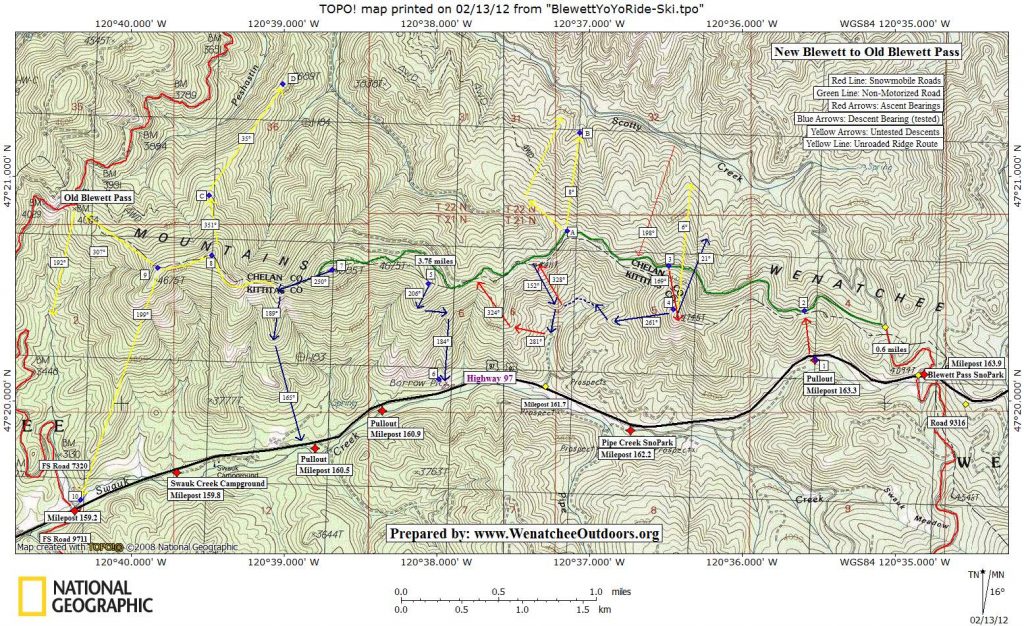