Righting a Wrong
by Andy Dappen 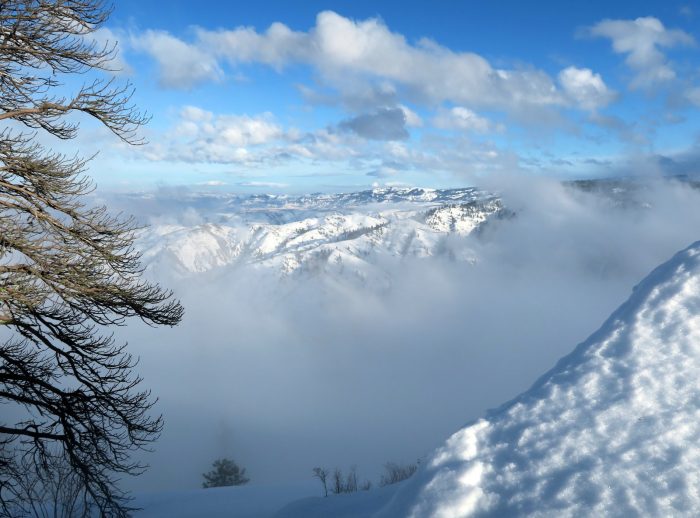 The hour is late. First the uninspiring cloudy weather kept me at home working, ‘You’re not going to see anything,’ the naysaying sightseeing side of me protested. By mid-afternoon it’s late enough (and warm enough) that the naysaying skiing side of me whines, ‘The snow will be mushed out, slow, and not much fun.’ 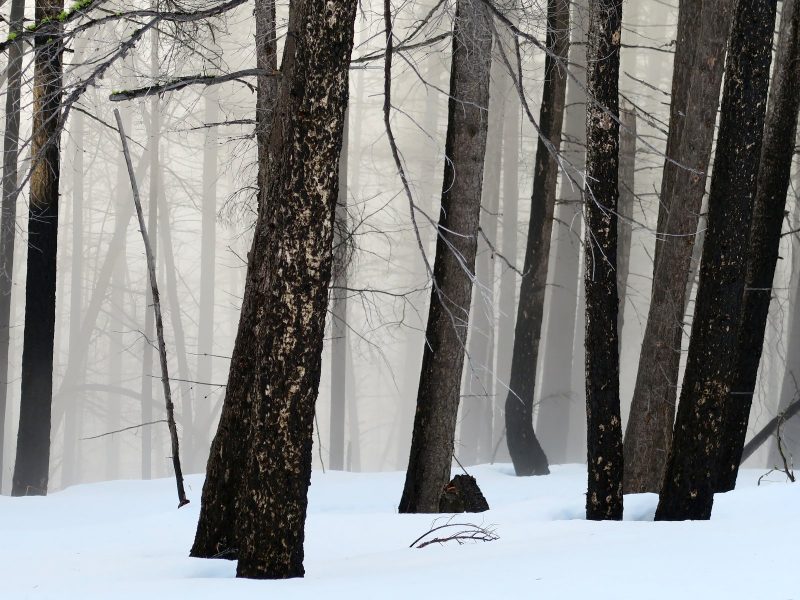 t’s dangerous to cave to the naysayers, however. It starts a precedent (and elects a president) that is hard to reverse.  Cave on your plans today and it’s that much easier to cave on your plans tomorrow. And that’s just the half of it. The other half tells me that decades of being wrong about what I think I’ll experience versus what I’ll actually experience are often worlds apart.

At 3:40 pm, I finally kick myself out the door, drive up to the end of the Number 2 Canyon road and park at the end of pavement. Luke the Wonderdog, jumps the fence of his keepers and is happy to see me. It’s probably been a long half-hour since he’s been up Twin Peaks with someone else.

By 4 pm I’m skiing up the road. Soon I branch off on an adjacent hillside that the conniving side of me suspects could have corned up given the warm temperatures of late. It’s breezy and clouds whip by. Golden views down Number 2 Canyon materialize and dissolve. Trees are being adorned in swirls of vapory tulle. The sky is sometime blue, sometimes gray. I ski with only one thin shirt on, until a cloudburst spills. By the time the rain jacket is on and I’ve skied another quarter mile, the sun shines again. How can you not love a day that is so changeable?

An hour of climbing brings me to the peaklet where the ridge forming the One-Two Divide intersects the south side of Twin Peaks. The swirling clouds make it a mystical location. A manhole in the sky opens to a view of Mission Ridge. Then mist covers the manhole, but not so completely that the sun, hanging close to the western horizon, can’t stream through. Suddenly I’m the center of a sundog with my shadow projected onto the mist and a rainbow encircling my shadow.

Were I an egotist who basted in conceit and self-deception, I would take this as a sign – of my holiness, of being The Chosen One. Instead, I know this to be a sign that I was wrong. Again. The 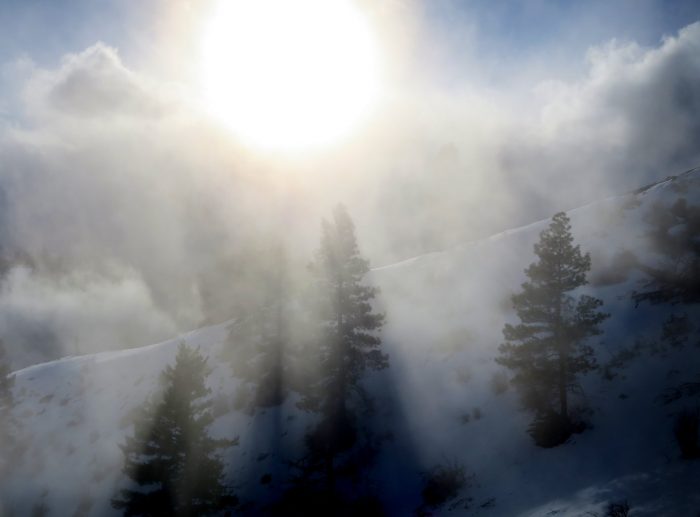 weather I feared would be uninspiring has been quite the opposite. It’s been memorable, luminous, mystical.

And that’s just the half of it. The snow that I imagined to be mushy and slow has corned-up beautifully. I descend to the car carving easily-controlled arcs. Piloting the skis between the stunted trunks of sagebrush and around the dried bulbs of balsamroots is just as much fun as skiing powder.

The valley is shadowed by the time the skis are boxed and the car rolls downhill toward town. My mood is high — as usual, I’m glad I didn’t listen to myself.