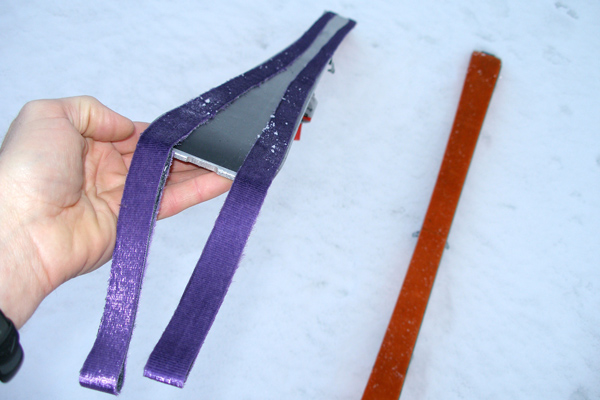 Following are some questions that inquiring minds have asked me, over the years, about climbing skins for backcountry skiing.

Q: Should Nordic skiers, not just backcountry skiers, carry skins?
A: Depends. On groomed, trail systems skins are usually unnecessary. If you’re light touring up a long, snowed-over Forest Service road, however, skinny skins (1” to 1.25” wide) allow no-wax skis to climb cold powder or icy surfaces without all that backsliding that toasts your arms. Likewise, if you’re relying on wax but climbing at the start of your tour, skins help you avoid the gobs-of-snow-stuck-to-your-skis syndrome that occurs when you climb from wetter-snow into drier-snow. I sometimes even use skinny skins on skate skis to explore the hundreds of miles of groomed snowmobile trails in the Wenatchee National Forest. Many of these trails start low and have long climbs up to high, undulating ridge systems. Intermediate skaters like me can preserve their strength on a long climb by skinning up; then we’re not fried by the time we reach the good skating along the undulating ridge systems up high. Finally there’s the matter of using skins to dampen one’s speed on an icy descents –sometimes swallowing your pride and skinning downhill can save your bacon.

Q: Where do I get skinny skins?
A: Skinny skins (1” to 1.25” or 25mm to 30mm wide) were once easy to buy but no more. Now it’s easier to find an old pair of 60 mm adhesive skins (the width formerly used on older, straighter AT skis before the fat-ski revolution ) and cut them, longitudinally, in half with a razor knife or scissors. Doesn’t matter if the skins are mohair or nylon plush, cutting them won’t create any issues with the cut edges unraveling. Clean up your cutting tools with acetone. Acetone is a mass murderer of brain cells so don’t sniff the stuff, and work in a well-ventilated area. To attach the skin to the tips of your skis, thread a short length of 1/8” nylon cord through the slot that formerly took the metal tip attachment. Tie the nylon cord into a small loop that’s big enough to lasso the tip but small enough to lodge there.

Q: I don’t have an old pair of skins to cut into skinny skins. What now?
A: Get on Craigs List and search. Use this site as a way to search All of Craigs List all once. In the search box try a few searches like ‘backcountry skiing skins’, ‘climbing skins’, and ‘ski touring skins’. Once you actually get a pair of skins to work with, cut the skins into strips that are 25mm or 30mm wide. At the tip end of your skinny skin, use a loop of 1/8-inch nylon cord to attach the skin to the tip of your ski. Fold the skin around this cord with about an inch of overlap. Sew that overlap closed. Your sewing needle will get coated with glue so clean it with acetone.

Q: What’s the best attachment system for the tail of adhesive skins?
A: I prefer skins with some form of tail attachment. As the glue on your tail gets dirty, old, or wet, some form of tail attachment reduces the likelihood of the skin falling off in use. This is particularly important on multi-day trips where the skins are going on and off a lot. This means I like the clip-on attachments manufacturers have designed for their skins. With skins that don’t come with a tail clip, I usually sew a ¾” wide piece of elastic to the end of the skin (use a wide zigzag stitch to butt stitch the elastic to the skin), attach a small D-ring to other end of the elastic, and then put a small screw near the tail of the ski (in the top sheet, of course) that keeps the elastic under tension when the D-ring is slotted over the screw.

Despite my preferences, I know a number of backcountry ski guides using their skins upward of 90 days a season who don’t bother with tail attachments. These guides prefer cutting their skin about 4 inches longer than the ski and letting the excess skin drag behind the ski as they tour. Those excess inches give them something to grab when they apply or strip the skin; this means they never touch and contaminate any of the glue that’s actually in contact with the base of the ski.

Q: What else should I do to keep skins adhering well to my bases?
A: 1) Apply them when they are warm—some skiers tuck the skins into their coat or under their shirt for this purpose. 2) Whether you’re applying or removing skins, don’t let the glue side touch snow or the ground. Also, avoid touching the glue side with your hand or glove. A trick for stripping a skin efficiently and without touching things: strip the tail half of the skin from the ski and fold that half in half on itself. Now strip the rest of the skin and fold the top half in half on itself. Is this a case of four halves making a whole?

Q: When my skin falls off during a tour, what do I do?
A: First, get all the snow off the glue-side of the skin. A simple trick for doing this is to stand your skinless ski in the snow (jab the tail into the snowpack). Now run the glue-side of your skin back and forth across the ski’s edge as if you were buffing a pair of shoes with a towel – the ski edge will scrape away the snow and, because it’s cold, won’t melt any of the snow stuck to the glue. After the skin is well scraped, reapply. If the stickiness of the tail seems suspect, pin the tail in place with several wraps of duct tape. Better still, pin the tail in place with a Voile strap. Unlike duct tape, these straps won’t get sliced off by the ski edge and they’re reusable. Because Voile straps have lots of repair uses (e.g., they’re good for splinting broken ski poles) it’s good to carry a few.

Q: Which skins are best: Those made by Black Diamond, Colltex, or Montana?
A: Different skiers have different preferences. The mohair skins made by Colltex and Montana are a bit lighter, not as stiff, and pack away smaller. My unscientific observations derived from skiing with lots of people using different skins is that the nylon Black Diamond Ascension skins climb as well as mohair but glide a bit better. One point about skins where there is more agreement is that many skiers prefer the Gold Label glue used by Black Diamond. When it’s all said and done, the differences in skins seem minor enough to me that I buy by price. I do prefer the Gold Label glue so, regardless of the skin I’m using, when it’s time to re-glue I clean off the old gunk and re-glue with Gold Label.

Q: For backcountry skiing, how do I fit the skins properly to my bases?
A: If you’ll be climbing steep slopes and/or switchbacking up glazed, crusty, or icy slopes, you’ll want fairly full-ski coverage. This means the skins should come to within 2 millimeters (1/8 inch) of each edge. You don’t need complete coverage at the very ends of the ski, but you will want full coverage 18 to 24 inches in front of your toe, under foot, and about 24 inches behind your heel. Edge-to-edge coverage of the tail of the ski is more important than such coverage at the tip of the ski.

Q: Do I really need this much edge-to-edge coverage to benefit from skins?
A: Yes and no. On snowed-over roads, gentler slopes you can ski straight up without switchbacking, and in soft-snow conditions, you can get by with skins that are skinnier than the skis. Nordic skiers, wanting help getting up steeper forest roads, for example, needn’t concern themselves with edge-to-edge coverage. AT skiers and telemarkers who are zigzagging up steep slopes, however, will be hating life (slipping badly) if their skins don’t have the edge-to-edge coverage described in the last answer.

Q: Snowed-over roads are common for approaches in Central Washington. Fat skins are a literal drag for skiing roads. How do you span these roads more efficiently?
A: There’s a few ways to crack this nut. 1) Purchase a wide ski with a no-wax base like the Karhu Tenth Mountain or Karhu Guide. Rely on the no-wax base for the roads and skin up when you exit the roads. 2) Carry a small selection of Nordic grip waxes and apply a little of that grip for the road skiing 3) Carry two skinny skins and one fat ski. On the road, apply a skinny skin to the middle of each ski. When it’s time to climb steeply, apply the fat skin to one ski and the two skinny skins to other (don’t worry about the skin coverage in the middle of this ski—just make sure each skinny skin is giving you proper edge coverage).

Q: How do you keep snow for sticking to the skins?
A: Anytime you move from slushy snows that wet your skins into dry snow (e.g., when you move from a sunny slope into the shade of the forest) expect 20 pounds of snow to glom onto each skin. When you develop this maddening (and tiring) build up, stop and 1) rub glob-stopper wax (sold for this purpose) into the nap of the skin 2) rub any form of paraffin (downhill ski wax or even the candle from a lantern) into the skin.

Q: My skis have gotten very gummy. When I pull them apart, the glue that’s pulling apart looks like chewing gummy. And when I pull these skins off the skis, often a bit of glue stays on the bases.  What do I do?
A: Cry, because the news is bad. You need to remove the old glue and paint on fresh glue. It’s not hard, but it will take you a few hours, it’s messy, and if you don’t do this outdoors where it’s well ventilated, the fumes will fry brain cells. 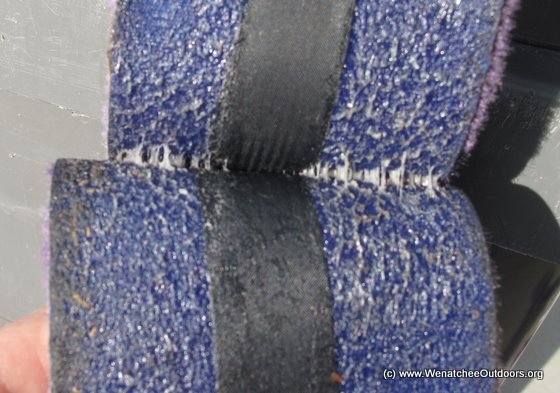 Gummy skins that need to be cleaned and re-glued. Ugh.