Rise of the ‘Mids’
by Andy Dappen 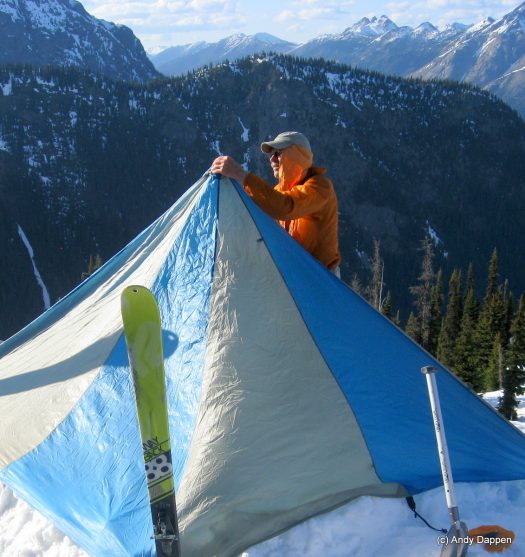 An ancient Egyptian erecting a pyramid (actually a Mega Light) near Washington Pass in the North Cascades.

In the outdoor world where needed equipment is usually strapped to your back, less is often more. Less weight translates into more distance traveled, more fun had. In some cases less even functions better than more. Such is the case with floorless tents that rise from a wide base to a narrow apex and are generally referred to as pyramids, megamids or ‘mids.’

Nomadic people have long relied on floorless tents of somewhat similar design as demonstrated by the tee-pees of North America and the ortz of Mongolia. The more modern use of these structures for outdoor sports extends back to polar exploration in the early 1900s with the Scott Tent or Polar Pyramid. In the early 1980s Yvon Chouinard modified the fly of a center-pole McKinley tent, shed most of the weight by ditching the interior insert of that tent, and gave adventurers good shelter for a fraction of the weight of a floored tent.

In the intervening years a variety of other manufactures have produced similar tents.
Mountain Hardware, for example, produced a slightly larger, heavier canopy called the Kiva that comfortably accommodated 4 people and was made of polyurethane-coated nylon.

Meanwhile GoLite produced the Hex 3 and the Shangri-la 3, both made of silnylon, and both excellent floorless tents made in the pyramid tradition with a single center pole. Neither the Mountain Hardware nor GoLite products are currently being made but in recent years Hyperlite Mountain Gear has created what we believe to be the lightest pyramid-styled tent on the market by employing cuben fiber in their Ultamid 2 (17.5 ounces for a 2-person canopy) and their Ultamid 4 (23 ounces for a 4-person canopy). Cuben fiber is the lightest, strongest fabric on the market (it’s lighter and stronger than silnylon); is a non-woven rip-stop fabric, and is completely waterproof. Sometimes familiarity breeds contempt. Giving a product a thorough shake-down in the field, for example, makes you realize it has some ugly warts. For me, Chouinard’s original Pyramid was one of the rare products that went the other way – it exceeded expectations. Although I initially considered this to be a three-season tent for less windy environments, it gradually became my preferred shelter for most trips, even backcountry ski trips in winter and high-mountain traverses in summer. Why?
•Weight. This was, of course, the initial appeal. Even for parties of two, this was a lightweight structure, but for parties of three or four, ‘mids’ offered monstrous weight savings over tents. Furthermore for skiers and hikers using trekking poles, the weight of the center pole could be eliminated because a pair of poles strapped together with Voile straps made a strong center pole.
•Temperature and air-flow control. These tents could be pitched so that the base was slightly off the ground, giving tremendous air flow and making the tents bearable in hot weather. Meanwhile in cool, wet, snowy, or blustery weather, the canopy could be lowered and staked directly to the ground, keeping wind outside and trapping heat inside.
•Headroom. Most people, except basketball players, could stand up next to the center pole to dress or undress inside the tent.
•No floor. While the absence of a floor did mean you needed a lightweight ground cloth (or an ultralight bivy sack) to sleep on, it also meant you could push the ground cloth aside and cook inside the tent with little concern of spilling fuel, water, or food, or about destroying the floor of your tent. Furthermore in inclement weather you could boot up or de-boot inside the tent. In really nasty weather you could even urinate in the corner of the tent (gross but preferable to frostbitten privates).

Part 2 of this article is: A Tale of Two Mids. A review of

1) The Black Diamond Mega Light. When it comes to value (high performance for the dollars spent) it’s hard to beat the Mega Light.

2) Hyperlite Mountain Gear’s Ultamid 4. When money isn’t the ultimate benchmark and you want both the lightest and best ‘mid’ out there, this is it.