“What are you thinking about for the weekend?”  It’s a question my wife frequently asks early in the week. “I was thinking about skiing Rock Mountain one day, and doing something with you the other.”

She thinks about this a moment. “I didn’t think there was enough snow for backcountry skiing,” she says.

“There is up high, but we’ll need to carry skis a ways. It’s a matter of thinking outside of the box…of being flexible.”

On Thursday evening, Jan wants to verify the weekend plans, “You still thinking of skiing this weekend?”

“Mmmm…probably not. The mountain forecast is for rain both days.”

Again, she thinks about this. “So why don’t you ski Friday and work one of the weekend days?  Tomorrow is supposed to be nice.”

“What happened to ‘thinking outside of the box’ … and to ‘being flexible’?”

How can I possibly ignore someone who is so willing to be rid of me? I grab the phone to call others with flexible schedules and the first attempt lands Matt. “I need to drop off a computer for servicing at 8:30 in the morning, but then I’m free,” he says. “Will that work?”

I do a little mental calculating, “Should be fine, but bring a headlamp in case we need to finish in the dark.”

The next morning we leave the car at 10:30 with skis and boots strapped to the pack. That makes the load ugly. I usually avoid such shoulder-crushing weight in favor of the freedom of traveling light. Flexibility, however, is the theme of the day and I saddle up.

By noon, we’ve climbed high enough that the trail is now more white than brown. We put on the ski boots. In another half hour (at the 5000-foot level) the trail is completely snow-covered and we click into skinned skis. With our skis cutting through a skin of corn and our eyes sweeping distant peaks dressed in white satin, we ski on. A little toil and flexibility may have been the entrance fee, but now the elevator of my mood is parked on the top floor. A little before 3 pm we reach the summit. Gray clouds paint the upper troposphere but camped below the clouds are the tents of a few dozen peaks we can name — Glacier, Sloan, Daniel, Jim Hill, Union, Jove, Howard, and Mastiff. There are also hundreds of peaks we can’t identify. We’re okay with that. For a few moments we set aside the part of us that likes to classify and give way to the side that is content to appreciate.

During the ascent we moved up the south side of the mountain before traversing across the upper stretches of  the peak’s west face. Those western slopes are steep and, at times, a bowling alley for massive avalanches. Today the snow is solid, save for the top inch of soft corn. “What do you say we take a lap down the west side?” I ask Matt. “It’s not every day you find it so stable and so skiable.”

Matt, a good disciple of flexibility, gives the plan a thumbs-up. So down we go. The big-mountain backdrop, the fall-away views, the avalanche-groomed slopes, the submissive snow under foot … all of this burns one of the season’s memorable moments to the Memorex of my brain.

Two thirds of the way down the snow starts getting mushy — the skiing is less joyful and a little lower still the slope will likely be less stable. The strong hand of gravity beckons us to ski down and down, while the weak voice of good sense suggests we end this descent on high notes. It also suggests we return to the top before the skin of corn we enjoyed on the approach scabs over with late-afternoon crust.

We listen to the weak voice and reapply the climbing skins. By 4:30 p.m., we’re back up and starting our descent toward the access trail and the car parked down by Highway 2. Our first turns are less than ideal. A thin crust layers the top of the snow. With each turn we exaggerate our up-down motion and, as the crust shatters under foot, thin shards of ice bounce down the hillside around us. It’s an explosion of motion in an otherwise still landscape. Ten tenuous turns is all it takes before some combination of changing exposure and lost elevation has us carving through joyful corn snow again.

In minutes we’re back at snow’s end, donning the trail shoes, and shouldering awkward packs. Then we’re left to the tedium of plodding back down the trail. It’s a slow grind but I have those “Better than good,” I tell her. “Thanks for the lesson in flexibility.”

I give her a grin. “Speaking of which…I was thinking we should, you know, work on flexibility. How about we…”
Slap.

The grin sails off my face, flies over the river, and lands somewhere in Douglas County.

Elevation Gain. 4,100 vertical feet. Distance. About 10.5 miles round trip from Highway 2 to the summit. Access. Drive 26 miles west of Leavenworth on Highway 2 and look for the dirt road and signage for Rock Mountain at milepost 73.2 on the north side of highway. For a tour when the snow level is pushed far up the mountain, turn onto the dirt road and either park immediately by the trailhead signage or drive another 0.45 miles up the dirt road (rough) and then park in a pullout just beyond the left switchback where the road starts climbing steeply and gets rougher still. Even if you have a worthy vehicle, don’t drive farther – there’s no place to park.

Hazards. There’s plenty of avalanche hazard along this route — in the wrong snow conditions you might find yourself drowning in snow. It’s up to you to decide when the route is sane or stupid. There are also big cornices along the summit ridge and when these fail, they often break much farther back from the edge than you would suspect. Keep your distance from the edge.

From the first trailhead by Highway 2 (elevation 2,670 feet), follow the dirt road two-thirds of a mile as  shown on the map as it zigzags to the start of the actual trail (elevation 3,000 feet).

Follow the trail steeply uphill as it zigzags up a small rib and takes you uphill in a NNW direction. Once you hit snow, continue working uphill along the trail if possible or follow a true bearing of 336 degrees if you lose the trail.

At the 5,000-foot level, the steep ground kicks back when you reach a more prominent ridge dividing Schilling Creek on your right and a creek the map does not name on your left. Follow a true bearing of 329 degrees into the alpine zone. For much of this leg you can stay on the ridge crest but,  at an elevation of 5,160 feet, traverse under the ridge crest on steep east-facing slopes below a little peaklet (noted as point 5,490’ on the map). Keep traversing uphill and gradually regain the ridge crest.

At an elevation of 6,200 feet, head west and gain the upper south-facing ridge of Rock Mountain. Once on this ridge, head north to the 6,840-foot summit. There are usually big cornices capping this ridge, so stay well back from the edge next to the dwarf trees.

Descent. There are more lines than you’ll have energy to ski in the cirque below the peak. Yoyo a few. If you know the snow is stable, the west and southwest faces have some large slide paths that are dramatic ski lines as well. On the final descent, retrace your ascent route back to the trail.

Permits.  A Northwest Forest Pass is needed for parking during the hiking season. It’s questionable whether this is enforced in the off-season, but show the pass if you’ve got it.
Map. USGS 7.5-minute: Mount Howard. Also, see our ski map.

Leave It Better Than You found It. This should be every user’s goal. You know the drill — leave no trash, pick up trash left by others, don’t cut switchbacks…. 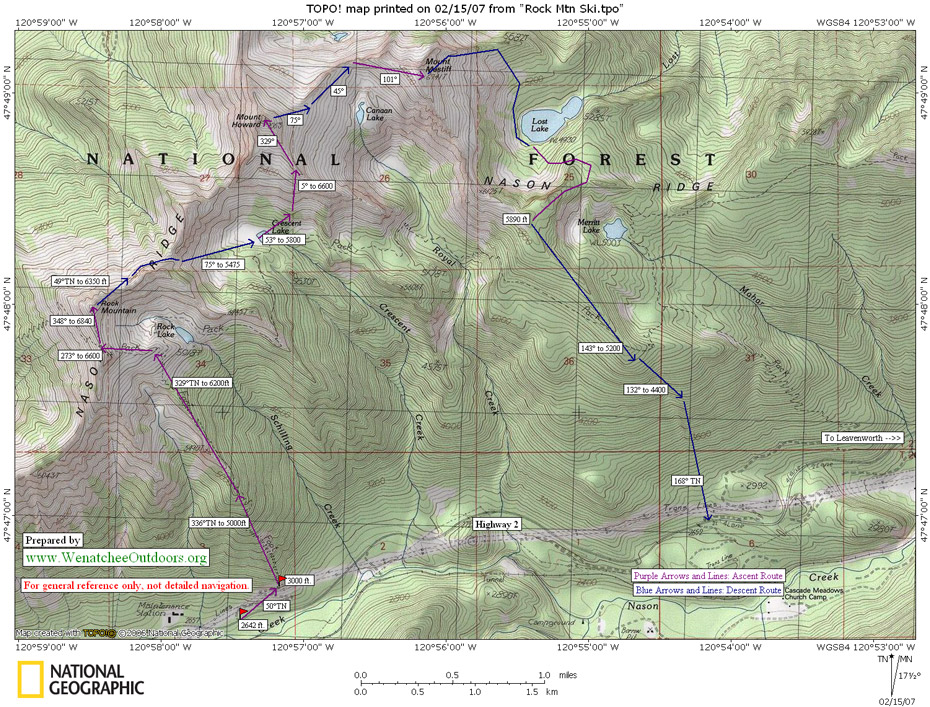