South Side of Prusik Peak – Photo by Marc Dilley.

Making comparisons can be risky.  On Saturday, August 6, Kyle Flick was planning to get up at 1 a.m.to do the complete North Ridge of Stuart in a day with Craig Gyselinck. This just seemed too much for me and Stewart Hoover, whom Kyle had asked about going. Stewart and I felt that by comparison, to do the Beckey Route on the south face of Prusik Peak in a day seemed reasonable.

We left Wenatchee at a disgustingly lazy hour for Mr. Flick, 5 a.m., and were heading up the Snow Creek Trail by 5:50 a.m. By 9 a.m. we were wading across the water of the Snow Lakes dam. Continuing up, we turned off the trail shortly before Lake Vivian, angling more directly for the base of Prusik Peak. Despite the unusual amount of snow still in the Enchantments, we did not need to cross any snowfields. We were at the base of the south face at noon and climbing about a half hour later. One problem with a one-day assault is that after hiking over 10 miles and 6000 vertical feet to reach the base, I was tired before we even started climbing.  Stewart, the better climber, did the leading.

You gotta love granite – lovely, solid, and trustworthy.  The initial 5.9 chimney pitch seemed a tough squeeze, but it was great to be finally ascending. The route was new to me, as I had only been up the easier west ridge of Prusik previously. Stewart did a stellar job with the leading while I loved the challenging moves stepping around some airy corners, following the steep crack systems. I also loved the occasional stretches of chicken-heads that seemed too good to be true. We reached the one-inch, nearly vertical crack leading to the top and stepped on the top about 6 p.m.  I love the summit of Prusik — it’s small enough to feel exposed, large enough to relax and enjoy the views of the Wenatchee Valley, Shield Lakes, Edwards Mesa, McClellan Peak, Little Annapurna,the Enchantment Lakes, and all those fingers of rock on the skyline like the Flagpole.

Photos below:  1) The summit platform. 2) View of Little Annapurna and The Flagpole. We snacked and rested; then we rapped off, worked back to the base of the peak, and switched footwear. At 8 p.m. we started back down with our larger packs.  Already the days have become notably shorter, but we were able to get down to the trail by Upper Snow Lakes before switching on our headlights. Being on this larger trail made travel much easier, although this section has many false paths leading to campsites that look deceptively like the main trail in a headlight beam.

We crossed the dam again at 10:45 p.m. and slogged downward. It requires a Zen-like state of mind to walk for hours with the world being reduced to a small, headlight-illuminated reality.  We got back to the trailhead about 2 a.m. and back to Wenatchee at 3 a.m. Stewart seemed to hold up well.  As for myself, just maybe I was a little less tired than Kyle and Craig after their much longer route the same day. Probably not, but maybe.

This article was originally published in August 2011.

Map: See a topo map below of Prusik Peak area and the Enchantment Lakes Basin. 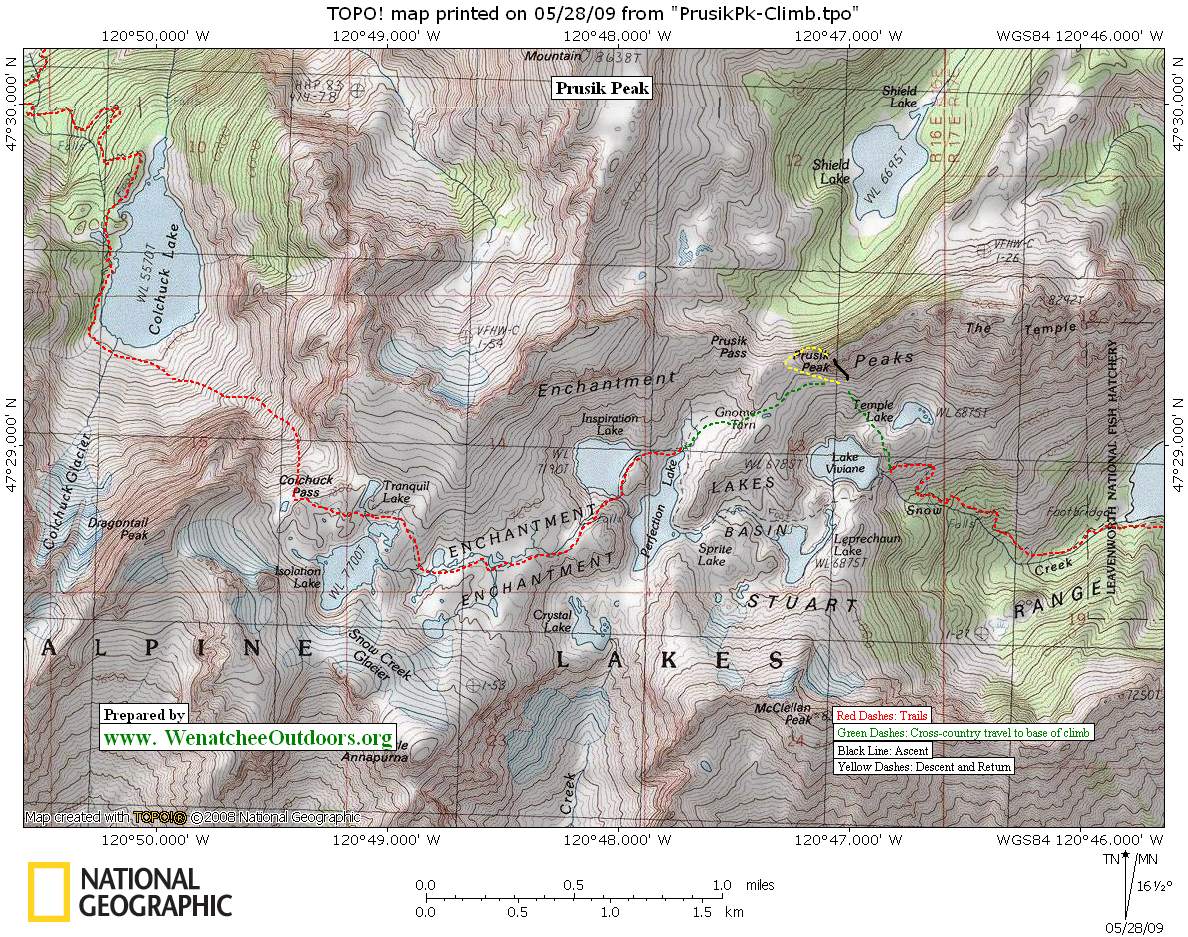