When you look at the best routes to bicycle in our community, think of the Apple Capital Loop as the hub of the bike wheel, with several roads as the spokes that allow you to get anywhere you want in town in an enjoyable and safe manner. As part of its long-term vision, the City of Wenatchee is working to increase the number of bicycle and pedestrian access points to the loop. The more spokes we put on this wheel, the stronger a bike community we become. Here’s a brief  rundown of the best spokes to ride.

Fifth Street in an important bike-commuter route in the center of town. Granted it has high traffic volumes, but it provides direct access to the Loop, the business district, and Wenatchee Valley College. The city affirmed its commitment to non-motorized transportation by designating a bike lane on Fifth Street from the Riverfront Park to Miller Street. Work is underway to provide a better bike route through Wenatchee Valley College–stay tuned. Eventually we will have a continuous and safe bike route from River Front Park at the eastern end of Fifth Street, to the western terminus at Sage Hills.

Now that we have River Walk Crossing (the bridge over the downtown railroad tracks connecting downtown to the Loop, First Street has become a very pleasant way to ride east and west. This is a safe way to travel with kids. For a change in pace, also try riding Orchard Street: It parallels First Street and has relatively low traffic.

On the southern edge of downtown, using Orondo Street to access either Cherry or Washington streets is a great bet. The grades are moderate and the shoulders are broad, allowing you to reach Western Avenue without a sweat.

Meanwhile, north of downtown, Maple Street is another strong spoke to the wheel, connecting the Loop and Western Avenue in a safe and pleasant way. It has designated bike lanes and a relatively low gradient. However, be careful crossing North Wenatchee Avenue (you feel like a gnat flitting around three-ton SUVs at this busy intersection) and while crossing the railroad tracks, which are at a tricky angle.

To ride from the downtown core, consider riding Orondo Street to Okanogan. The two streets take you through some of the community’s historical buildings and homes.

Western Avenue is an increasingly important commuter route for bicyclists. In general, it is safe, free of debris, direct and has good shoulder lanes for cyclists. Western Avenue now has a bike lane from Maple Street north through Maiden Lane. The Greater Wenatchee Bicycle Advisory Board has recommended to the city and county to designate bike lanes from Maple Street South to Cherry–this is a practical designation that benefits both bicyclists and motorized traffic by allowing for a center turn lane which increases traffic volume and safety. Be very careful at the southern terminus to Western Avenue, where it makes a sharp bend to the west and becomes Number 2 Canyon Road–the narrows dramatically and is neither bike nor pedestrian friendly here… As part of its comprehensive plan, the city will upgrade this turn. Eventually, we will also have both bike lanes and sidewalks at this important location.

For those preferring a less direct and quiet route, consider the designated city’s ‘Bike Routes,’ which have no formal bike lanes established, but are marked by well-placed signs to guide riders. From south to north, the route is Saddle Rock to Pearl and Charles, over to Princeton, skipping up to Tacoma, then Pine, Walnut, and you’ll find yourself on the bike lane behind Home Depot. Note that this route goes by or near many of our community’s schools, and provides a safe route for our youngest commuting generation.

One feature you will note about Wenatchee’s  ‘Hub and Spokes’ concept of bike routes, is that access to our schools is a key component. All elementary, middle, and high schools in Wenatchee are tied to bike lanes, and efforts are underway to provide better bike access to Wenatchee Valley College. Keep an eye out for the little green signs that designate bike routes in our community. These routes take you through the quietest neighborhoods and connect our city’s parks and schools.

Monitor/Bakery Loop
Without a doubt, a Wenatchee favorite for an enjoyable and relatively easy ride out of town is the d’Anjou Bakery loop from North Wenatchee. Ride up Sleepy Hollow Road to East Richared and on to lower Fairview Canyon into Monitor. At the intersection before crossing the railroad tracks, turn left on Pioneer Way and before long fade right on Old Monitor Road. Follow this over the old wooden bridge and then uphill to the bakery where you can refuel and refresh with delicate patisseries. To complete the loop, come home on Easy Street, which gives you gentle grades, relatively low traffic, and relatively good shoulders to ride. Reach Easy Street by riding east from the Bakery along Highway 2 (good shoulder) to the first traffic light and turning left. Alternately, retrace the route above from the bakery to Monitor and turn left across the railroad tracks on Main Street. Main Street crosses Highway 2 and becomes Easy Street. If you want to avoid the hassles of riding on North Wenatchee Avenue (which needs some serious work to make it bike friendly) consider putting the bike on the car rack and drive to Chatham Hill Road, where you can park the car and start your loop there. See the ‘Wenatchee-Monitor: Long Loop’ in the WenatcheeOutdoors Biking-Road guidebook for more details about this ride.

Cashmere/Leavenworth
If you have the time and inclination, you can add several extensions to the Bakery Loop by riding up to Cashmere and Leavenworth, where many more bakeries await. Consider riding North Road from Peshastin to Leavenworth, which is a quiet roller-coaster ride with fine views of Wedge, Temple, and Cashmere mountains.

Entiat
Now that we’re on the subject of bakeries, the Entiat Loop up Highway 97 is a superior choice for a morning jaunt. The Entiat Bakery, close to the Forest Service Ranger District, does an admirable job of replacing lost calories in a most pleasant manner. Traffic on the highway can be daunting at times, but the shoulder is wide, clean, and well-maintained. Consider continuing your ride up the Entiat River, either to the fish hatchery at Roaring Creek for a fifty-mile loop, or continue up to Silver Falls and return to Wenatchee for a full century ride.

Chelan
Another century route to consider is the loop up Highway 97 to Chelan, along the lake to Eight-Mile Park, over and down Navarre Coulee. Return to Wenatchee on Highway 97A. You have well-spaced rest stops at the following parks along the way: Lincoln Rock, Orondo, Daroga, Beebe Bridge, Don Morse, Lake Chelan, Eight-Mile, Entiat, then Wenatchee Confluence. It’s a great summer ride, giving you lots of opportunities to swim and relax along the way.

Malaga
Take Crawford Street east to either Methow or Mission Streets, where you can connect to the Malaga Highway via Terminal and Viewdale. This can be a pleasant route to Stemilt Hill (a climber’s paradise) or past Malaga and Alcoa to the Colockum. The farther you go, the more pleasant the riding becomes.

LEAVE IT BETTER THAN YOU FOUND IT. This should be every user’s goal. Pick up trash left by others, pull noxious weeds along your route, disperse old fire rings, throw branches over unwanted spur trails…

DISCLAIMER. Treat this information as recommendations, not gospel. Conditions change and those contributing these reports are volunteers–they may make mistakes or not know all the issues affecting a route. You are responsible for yourself, your actions, and your safety. If you won’t accept that responsibility, you are prohibited from using our information. 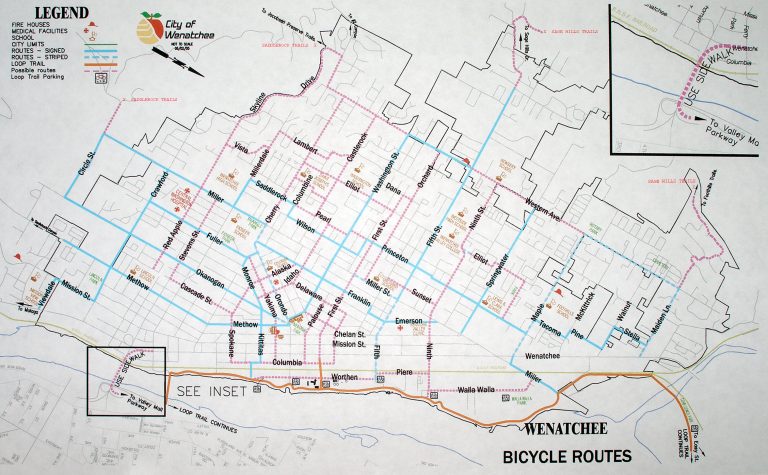