An “Epic” Adventure With Some Kids

Like we had done so many times before, we planned to park at the trailhead and hike the mile and a half to the lake. But because of the snow, the road was closed about a mile away from our intended departure.

We had left home later than we would have liked and got stuck in traffic in Leavenworth, which had us starting out at 3 p.m. During the summer months starting at 3 p.m. would be no big deal, but with the winter solstice so close, we had about two hours of daylight remaining.

My husband throws a headlamp into the backpack and says, “We’re not going to worry about the daylight. There are no storms in the forecast, so we should be fine.” Meanwhile another car pulls into the lot and a family with two teenagers gets out and starts silently gearing up to do some cross-country skiing. They give off a grumpy vibe, like they had some kind of disagreement during the car ride.  As I’m squeezing my three kids into snow gear, 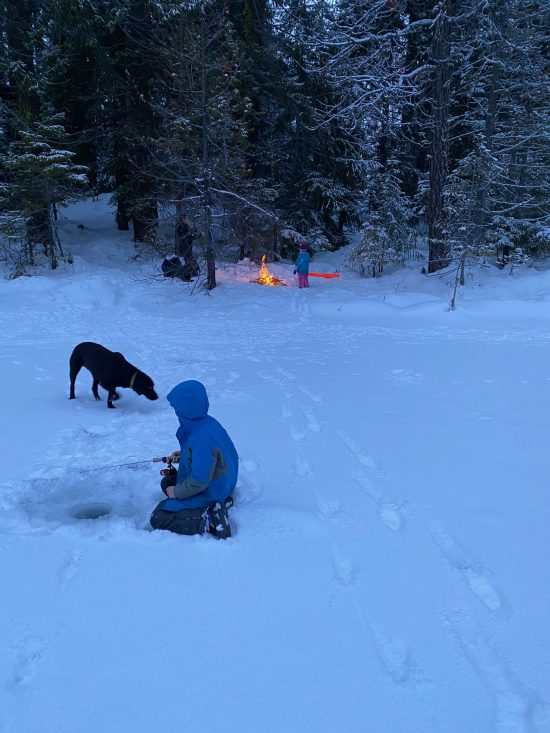 the mom smiles at me and says, “I remember those days and how hard they were, but they were definitely fun!” I gave her a smile back, hoping that she’ll have some fun today too, despite the grumpy teens.

Adding three small children into our lives has definitely changed our expectations of outdoor adventures, but it certainly hasn’t changed the frequency or enjoyment of them. Those adventures are just, well, different than when we were a childless couple..

As of lately, we’ve tried to do hikes that lead to some sort of destination within a mile or two. Our 7 and 5-year-old kids can typically handle those distances without having to be carried or prodded too much, and a destination such as a lake, river or waterfall provides an incentive to keep going. I typically always plan to carry the 2-year-old at least some of the way on my back.

This trip is different because I took advantage of the snow and used a sled. It’s just one of those cheap plastic sleds you can get at Stan’s Merry Mart, but I’ve extended the rope so that I can fasten it around my waist and basically pull it like a sled dog (or something like that). I also wear thick gloves so if I do have to pull the rope with my hands, they don’t get chaffed or cut. The snow on the road and the trail was packed down from people hiking up there, so we didn’t need snowshoes or any special gear.

After being cooped up in the car for almost two hours, everyone has a lot of energy. My son follows the dog up the snowy road as I trail behind pulling both girls on the sled. Then I realize that we’ve left my husband at the car still packing the backpack. We have gotten into the habit of using my old backpacking pack for even short hikes. With only one of our kids willing to carry a backpack, and me pulling kids on a sled, he packs necessary items for the remaining four people with all the essentials: first aid kit, snacks, water, materials to start a fire, hatchet, camp saw, campfire food and (of course) fishing gear. On this particular adventure, we plan to do some ice fishing, so my husband has to squeeze all of these “essentials” in and around an ice auger.

The mile up to the trailhead was easy going, and everyone was excitedly pointing out animal tracks in the snow. We saw tracks made by coyote, rabbit, bobcat, dog and other people.  When we arrived at the trailhead, we decided to press on. The trail was packed down and wide enough for me to pull the girls on the sled. We ran into a few downed trees that we had to portage the sled over, and a few uphill inclines that were a bit awkward, but overall it was pretty easy going all the way to the lake.

“Wow, you’re really getting a workout in today!” said the fast-moving couple we passed on their descent  to the parking lot. I was wondering what they were thinking about our choice to be out there, with kids, at that time of day with the dwindling daylight.

Finally, at the lake, the girls and I scurry around finding dry wood to make a fire, and my son uses the hatchet and retractable camp saw to cut that wood into chunks for a campfire. Because the girls got a ride to the lake on the sled, they were not engaged in much physical activity and started to complain about being cold. They are hungry, as always, so I present them with a plethora of snacks and hurry to get the fire going. The fire is easy to start, but the small pieces we manage to forage are burning up fast, so I spend most of my time foraging and tending the fire.

My husband is testing the ice to make sure it’s safe..“Whooo hooo! 5 inches!”, he yells from the edge of the lake and proceeds to drill two holes for fishing. My son abandons his saw, grabs the new ice fishing pole he got for Christmas from Santa Claus, throws on some bait and starts fishing. He had planned to cook a trout over the open fire, but settled on roasting marshmallows when he hadn’t landed anything after about an hour.

I finally build the fire up to a reasonable blaze and sit with the girls on my lap and relax a bit in the warmth,when I realize that the daylight is almost completely gone. I was thinking that once we’d lost the light, we might still have some help from the moon’s reflection on the snow. However, with the cloud cover blotting out the moon, it gets darker and darker. All of these survival scenarios were running through my head as I considered the possibility of having to spend the night in this spot. Then I start frantically packing up all of our stuff, load the kids up with snacks and water, and let them roast a few marshmallows. My husband starts saying things like, “We’re fine. Don’t worry. We have a head lamp. It’s not that cold.” I knew we were fine, and if we did have to spend the night out there it would be fine too, but I was ready to get back.

We started our descent with my husband carrying the pack, pulling our eldest daughter in the sled, and lighting the way with the headlamp. The one headlamp wasn’t really throwing enough light to make it to the back of the line (since we have to walk single file on the trail), so we use one of our cell phone flashlights too. My earlier freak-out about getting back to the car has obviously affected my youngest, and she wants to be held, only by me. I didn’t bring the baby carrier, so I just have to carry the 32- lb toddler for the entire 2.5 miles. When I wear a sleeveless shirt in the summertime, friends compliment me on my toned and muscular arms. They say, “Wow, you must be getting into some climbing (rowing, weightlifting, etc)!”. “Nope, it’s just mom arms.”, I say in response. This snow hike down from the lake is a good example of my arm toning regiment. I’m sure other parents of small children can relate to this.

Everything is going fine until a huge beast with glowing eyes runs right in front of us.Everyone screams! Someone exclaims, “It’s just the dog!” Phew. That was scary! This is the last straw for the toddler, and she starts to whine and says, “I just want to be in my house with my babies (dolls).” Once we get down to the road part of the hike, we start looking at animal tracks again. My husband makes the mistake of saying,“cool! Cougar tracks!” The 5-year-old starts to get nervous and cry, so to keep her mind from racing, I suggest that we sing a song. My son leads us into “It’s a Small World After All”, and the kids basically sing that until we get to the car. We make it safe and sound to the car at about 6:30 p.m.

After the kids fall asleep in the back seat, my husband says, “When they’re adults, they’ll reminisce about our trip today.”

I said, “I hope so, but they might forget about it considering all the ‘epic’ adventures we’ll do in the future.”

You see, these outings are epic! Our kids won’t remember each and every hike, but they’ll remember that they did things like make it to the top, cook a meal over an open fire, catch a fish in a mountain lake, or spot cougar tracks in the snow. Let’s face it…. living in the Wenatchee Valley makes it easy for adventures to get epic really quickly. The views are amazing and the opportunities for outdoor recreation are unlimited. Epic adventures are at the tip of our fingers and the edge of our towns. So grab your kids and a big backpack and get out there and enjoy!