Some issues are always spotted with clouds. A view of Stevens Pass from the Dementia Tour.

The discussion has me uttering blasphemy, “At the end of life, we often treat pets better than people.”

It had started as we skied up Heather Ridge across the highway from Stevens Pass. I listened to Tom Janisch and Matt Dahlgreen discuss the end of life for their pets. Tom needed to put his family’s retriever down a few months ago when it could do nothing, not even stand, on its own. Now Matt has reached this milestone with his 15-year-old standard poodle. He’s conflicted about messing with the process of death, but suspects kindness will dictate putting his pet down in the week ahead. “It’s so hard,” Tom says. “They become part of the family…but they reach a point where they’re suffering and they’re never going to get better.”

Matt and I have both visited this ethical quandary recently with parents. Matt’s mother died of complications from late-stage Alzheimer’s a few years ago and for the last two weeks of life she was bed ridden and unable to eat, drink, or respond to her surroundings. My father died of dementia in the fall and during his final month of life was bed bound, mentally vacant, in physical pain, and was drugged most of the day. Occasionally, in a half-lucid moment, he’d mutter, “I can’t wait for this to be over.”

But there was no speeding him along his road–a road from which his dilapidated, 87-year-old body would never recover. He died the slow, painful, ‘human’ way. The way God, apparently, wanted it…never mind that medical procedures and man-made drugs kept Dad alive far longer than God intended. We’ve  reach the top of Heather Ridge and have headed west for nearly a mile to an airy platform overlooking the cathedral of creation—mountains rise in all directions, old-growth forests coat the valleys below, clouds swirl around jagged peaks, and laser beams of sunlight slice through those clouds. We stand on a spinning globe, orbiting a flaming ball of hydrogen with everything around us is in flux. In fact, there are so many geologic, biologic, atmospheric, and astronomic forces at play — all operating with random-element generators — that the future is utterly unpredictable. And what a stroke of genius that is. If you were the Creator, would you not craft a system with so many rolling dice that even you, the all powerful, couldn’t predict the outcome? What a refreshing dose of the unknown that would offer a being tethered to the tedium of eternity.

As to playing God with the lives of our parents, a major sticking point is defining the fuzzy line where life is no longer worth living. Matt says that his mother, as she descended into the haze of Alzheimer’s, could no longer make that decision, no longer even knew what the decision was. But Matt says his mother was mainly happy and exhibited a profound quality of grace, even after her mental collapse. “Seeing how central grace was to her core showed me who she really was. This was her last, and maybe her greatest, gift to me. It’s still a paradox that as vacuous as she was at the end, she was still teaching me how to live.”

“But was there a time when she could no longer give even this,“ I ask, “a time when life was just a grind to wait out the clock?”

Even as conflicted as Matt is about the ethics of ending a life, he says, “There’s nothing holy about dying of starvation and dehydration in a morphine-induced stupor. Once she was bed bound and couldn’t take care of any of her functions, that would have been the time to end it.”

We reach a high point where we strip skins; then we tip our boards over the edge of an unnamed peak. We glide down a north-facing slope and discussions about dementia and death’s door dissolve. For a moment, we float on metal wings through an atmosphere of white powder.

The cheerless discussion re-engages after we skin up and shuffle toward the headwaters of  Nason Creek. We momentarily kiss the Pacific Crest Trail before climbing, cross-country, up a 5,600-foot peak overlooking Lake Valhalla. We talk about my father and his mental slide to a point where he no longer remembered his past, friends, or family. Though terrifying at the start, he descended past horror into contentedness.

I, too, was surprised by what remained after this descent. When sharp, Dad was impatient and driven; he was outspoken and intolerant of fools; he was quick to anger. Yet, after the dulling process, what remained were his deepest qualities. When reduced to a shell, Dad was kind, gentle, appreciative, and forgiving.

As we stand on top of this peak that overlooks Lake Valhalla, Matt asks what we did after my father died. “Cremated him,” I tell him, “I’ve got his ashes in the basement.”

Matt has unusual thoughts in this respect. “I don’t want to be buried or cremated. I want to be dragged out into a forest like that one,” he says, pointing to the old-growth grove below us, “so the coyotes, birds, and bugs can have me.”

“Yeah. Lisa says there’s no way she’s going to get locked up for the last years of her life hauling my carcass into the woods as if she murdered me.”

We ski off the north side of our peak, enjoying a near-perfect run down a 35-degree slope coated with boot-top fluff. On the lake below, we reapply skins and climb to the 5,747-foot summit of Mt. McCausland. This summit peers down into Dow Lake and, given the philosophic bent of the day, Matt wonders if it shouldn’t be named Tao Lake. I don’t think so. My father managed paper and pulp mills most of his life and was always breathing fumes radiating off chemical baths. These chemicals could have triggered his fall into the fog. ‘Dow’ Lake, I tell him, seems right on target.

We drop yet again through more north-facing powder into a primal forest populated with hemlocks that are four-feet in diameter. The downhill whoopees end and the skins are reapplied for the final climb of the day. Before striding off, I study the map and visualize the last legs of a rather complex route. We must contour into another draw, climb to Union Gap, and then descend dense, forested slopes to the Smithbrook Road. For a moment, I study the entirety of the day’s off-trail terrain, and that’s when the ‘Aha’ solution to this euthanasia, dying-with-dignity, dementia, natural-burial conundrum crystallizes.

I tell Matt that the first major clue we saw in Dad’s demise was his inability to read a map. About four years before his death, I remember his complete confusion in using a road map to get around Portland. To my doctor brother, this loss of spatial cognition, when combined with stories about other lapses, was a telltale sign that Dad’s brain had turned off the Normalcy Turnpike and was bumping down the dead-end street of Swampy Choices. Not a bad place to Bop ’til you Drop.

“So here’s the deal, Matt. Occasionally when we wonder whether our brains have taken that detour, we each need to grab a map, and ski this route without telling anyone.” I examine the heart of darkness surrounding us here in the Henry M. Jackson Wilderness. “If we can make sense of the map and ski our way out, we’ll know our brains are operating within acceptable limits.” Matt is smiling. “If we don’t have a clue what the map is saying, we’ll wander around here haplessly, drop in our tracks, go hypothermic, and give ourselves over to the Great Mandala…and the coyotes.

It’s a good plan…provided we remain healthy enough to keep skiing. But if we can just keep shuffling boards, there will be no protracted downhill run, no survivors incarcerated for executing our last wishes, no wasted financial resources keeping our dead-end shells and deadened spirits alive, no guilt among survivors forced to institutionalize us. Nope, the Dementia Tour will be short, sweet, and cheap. It will be a natural track surrounded by beauty. And the final descent, leading to either the gates of eternity or the blackness of oblivion, will be coated with powder.

Distance: Roughly 12 miles one-way. This is a traverse and you’ll need to leave a car at the Smith Brook Road or hitch a ride back to Stevens Pass to retrieve the car.

Access: Drive to Stevens Pass and park on the north side of the highway.

Note: Use ‘print preview’ to properly scale the map before printing.

Hazards: Getting lost is quite possible if you’re not proficient with map, compass, and altimeter. Various slopes along the way also present avalanche hazard.

Fees and Permits: None required 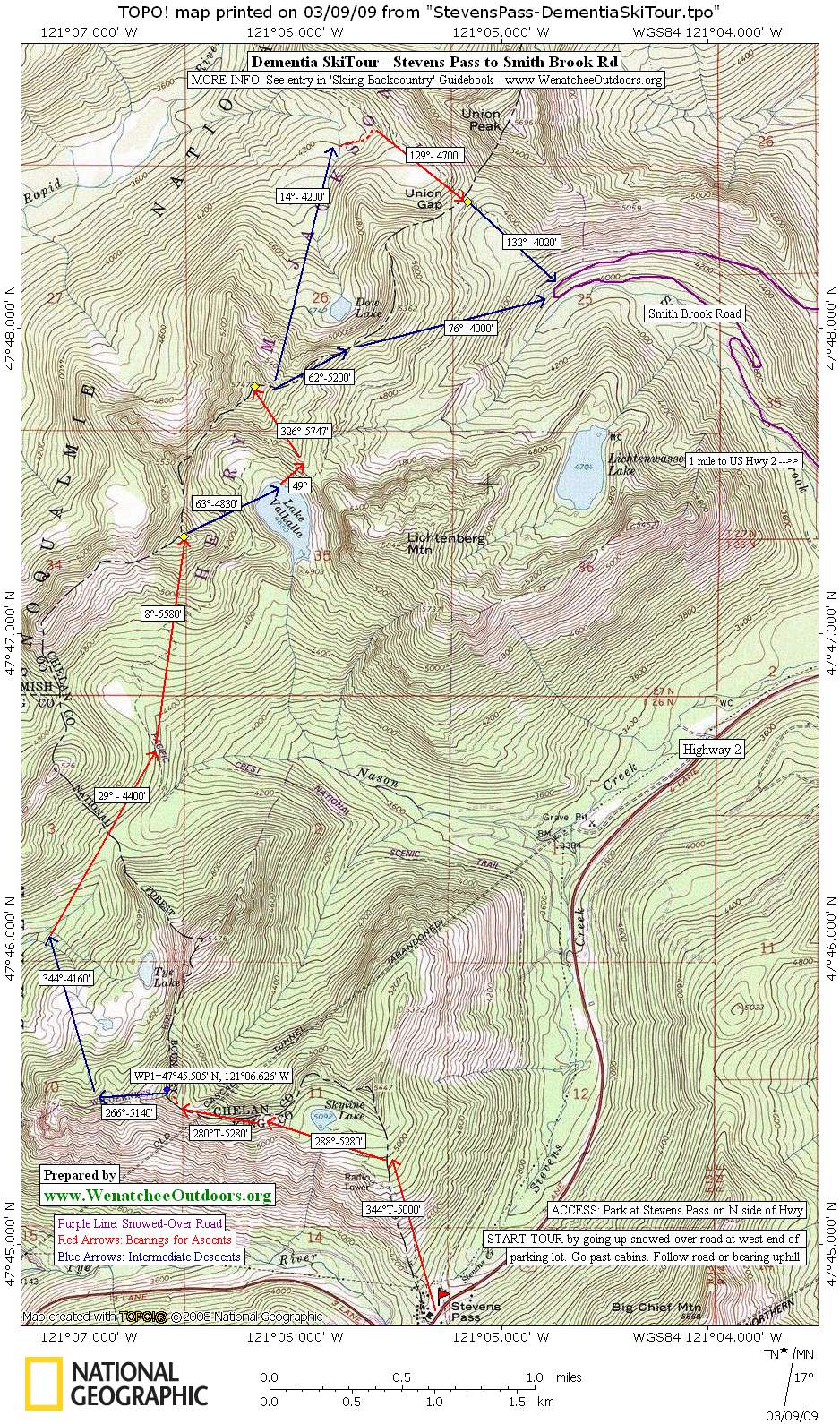