A ride I’ve always stared at in the WenatcheeOutdoors guidebook but never gotten around to riding was Chelan Butte. A summer day finally arrived when I found time and dragged two buddies along for the ride. We started at a cabin about three miles away from Chelan Butte Road so the GPS report may be a bit deceiving. There are a few places you could start this ride and know that eventually it will spit you out on the corner of Chelan Falls Road and E. Iowa Avenue where there is a gravel parking lot (see topo map below).

You could also park at Lakeside Park and cross the highway and hit Millard Avenue, which quickly turns into Chelan Butte Road. If you have a downhill mountain bike or do not like to climb, the dirt road to the top can be easily shuttled, as the road is nicely graded (a low-clearance vehicle can make it to the top).

This is a healthy climb. It’s nearly 5 miles of 9 percent average grade with some parts pushing higher into the double digits, so early morning is best because you’ll be sweating. To compare it to one of the hills around Wenatchee, I would say it’s similar to Burch Mountain, but without as many flat spots to rest as Burch. The ride up the road starts on pavement and, after about a mile, turns to dirt. The steepness doesn’t ramp up until about the third mile, but then it stays pretty consistent all the way to the top. The whole way up you can see the towers at the top beckoning you onward, almost teasing you as they never quite seem to get closer, as the road zigs and zags its way upward.

The views that unravel of the lake and surrounding peaks make this climb much more bearable and eventually you’ll come to a junction with a road to the right, about a mile from the top, and views of the lower valley, Columbia River, and Waterville Plateau appear down the other side of the butte. Going right here starts to descend and could be another route. If you wanted to climb from a different direction. You could start on Downey Road off of Highway 97a, about a mile past the tunnel, or down on Stayman Flats Road, climbing either Pear Orchard Road, or Chelan Butte Road. For now, you’ll stay left and continue up the last few switchbacks on what is now Butte Lookout Road.

Just before you reach the towers at the top, there is a spur to the right, with two porta potties, presumably for the paragliders who launch from the summit (this is a national caliber paragliding destination and the area has hosted the national championships on several occasions). Stay left until you hit the towers. The views are great but somewhat disrupted by the multitude of towers. As you ride uphill you’ll find the single track down the northeast ridge starts on the left side of the left tower (Waypoint 5). The top part of the trail is great for the first three-quarters of a mile, then the route gets steeper and rockier for a mile — it’s still all ridable. The views along the way are stunning and the ones I appreciated the most were looking back up the trail at the trees and sloping hills.

Photo: Views at the Saddle (Waypoint 4)

Eventually you’ll hit a saddle (Waypoint 4) and the trail will take a 90-degree turn to the left. From here it traverses gently but consistently downward for nearly two miles. Part way along this segment, the trail turns from single-track to double track. At Waypoint 3 the trails reaches a junction and there is a small homemade sign stating ‘Elephant Butte and Chelan Butte’. Turn left here and ride a slightly larger dirt road downhill for another 0.25 miles to reach the road and the parking lot noted on the map.

Photo: Lake and mountain views a short ways beyond the saddle.

Mountain bikers who parked nearer to town or near Chelan Butte Road will want to turn left and follow Iowa to Sanders to Farnham to Webster to Highway 97A. See our map to make sense of this.

Photo: The hikers view of the summit as you approach along the northeast trending ridge. 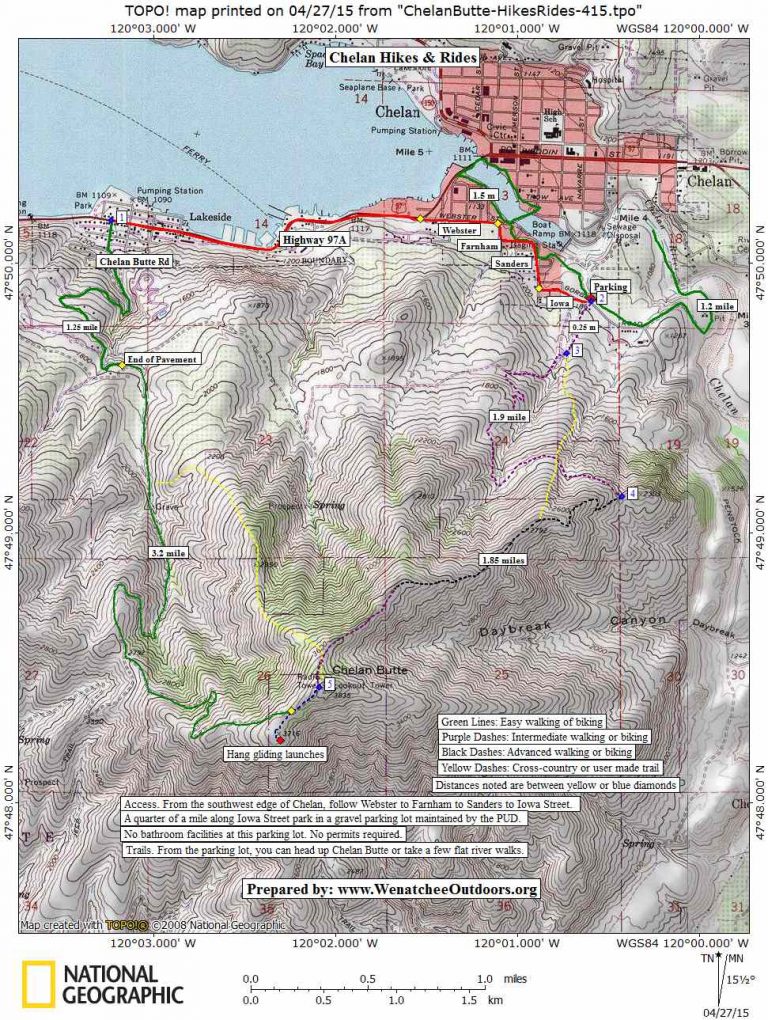