Beautiful hills, views, and trails, immediately accessible from Wenatchee. It’s short to get there and sweet to walk. Look for native flowers along the foothills.

Note: Our map is overlaid with a mountain-biking/trail-running route that overlaps most of the hiking route described above but is a few miles longer.

Activity: Hiking, Family Fun, Wildflowers, Mountain Biking, Trail Running
Nearest Town: Wenatchee
Skill Level: 2
Fitness Level: 2
Distance: 7.2 to 7.7 miles total. Make it shorter by walking as far as time or energy allows before retracing your steps.
Elevation Gain: 850 to 900 feet.
Recommended Season: Early April to early July, and mid-September to November. Most years the wildflowers are wonderful between mid April and early June. Most of these trails are closed from December 1 until April 1.

Access: At the intersection of Fifth Street and Western Avenue in Wenatchee, head west (uphill) on Fifth Street for about 0.6 miles until the road hooks hard to the left (south) and becomes Number One Canyon Road. Carry on about 0.4 miles to where Sage Hills Road splits off to the right. Park here on the right (north) side of Number One Road. There is a small gravel pull-off that can easily accommodate 6 or 7 cars if users park efficiently. Note: The old parking area at the end of Sage Hills Road is now closed and posted with ‘No Parking’ signs. You can be ticketed and neighbors will happily call a towing company if you park there. Avoid this old spot, park at the spot mentioned above, and walk an extra 0.2 miles to the trailhead.

Trip Instructions:
–Follow Sage Hills Road. Almost immediately the road Ys. Take the right fork and walk to a cul-de-sac at the end of pavement (0.2 miles).
–The Lester Trail starts at right side of cul-de-sac. Follow it uphill and then along the flats until you intersect a decommissioned road being restored on the Chelan-Douglas Land Trust property (0.4 miles). Remain on the trail, which at this point locals call The Sage Hills Trail.
–After another 0.4 miles, you’ll hit a trail intersection. Go straight and then climb uphill on a trail with several switchbacks that eventually cuts under a rock outcrop. Note: This section of trail was built in 2006 and the old, direct trail up the gut of the draw before you was decommissioned because it eroded badly. Please use the new trail.
–In 0.7 miles you you’ll come to a saddle (elevation 1,360 feet) where five trails come together (called Five Trail Saddle). A hard right leads to private property, second right drops into the Broadview development after 0.5 miles, third right is the trail you want, a hard left goes up a steep ridge and is being decommissioned by the PUD.
–For the next 0.3 miles, a variety of trails and roads intersect your trail. Stay on the larger trail (not fainter spur trails) that climbs very gradually and contours (avoid trails dropping or climbing steeply).
–The trail intersects an old jeep road that goes up a ridge past powerlines and eventually reaches the skyline. Go straight, remaining on the trail that contours into Coyote Canyon.
–After 0.9 miles you’ll intersect a double-track jeep road. To reach this intersection you will have contoured above a draw, dipped in and out of that draw, and climbed up two switchbacks. This new jeep road you’ve intersected follows along a long, undulating ridge that eventually drops down to the lower sections of Horse Lake Road.
–Cross the jeep road and keep contouring on the trail. In about 0.2 miles, a few trails come in from the right over a 100 yard distance. Stay on higher trail that contours. This portion of the trail (known as Upper Snakebite) is fairly eroded as it enters and dips down into a little ravine.
–After the ravine, the trail climbs a bit more steeply as it traverses 0.2 miles along a sandy hillside up to broad saddle. At this broad saddle you are on the north edge of the Sage Hills and you’ll see Burch Mountain out to the northeast.
–The main trail bends 90-degrees to the right, soon passes under powerlines, then heads up a knoll (0.15 mile).
–The top of the knoll (elevation 1860 feet) is the highpoint of the hike.

For the return trip:
1) Retrace the route you’ve just followed, or
2) Follow the trail in an easterly direction down opposite side of the knoll. Remain on the main trail and you’ll descend about 0.75 miles on the lower Snakebite Trail, cross a little badlands ravine, then contour uphill about 0.25 miles to a saddle where you’ll intersect a jeep road (the same jeep road you saw earlier that runs down the ridge to the bottom of Horse Lake Road).
–Turn left on road and follow the jeep road 50 yards uphill to a path branching off to the right. Turn onto this trail.
–Follow this trail 0.8 miles as it drops gradually at first and then more steeply. This is the trail mountain bikers call Jackhammer. Eventually the trail drops steeply into a narrow, gulley.
–Climb up the opposite side of the gulley and in 40 yards the trail Ts. Go left and climb steeply. In another 30 yards, the trail Ts again. If you were to turn left, you would walk downhill on into the Broadview development. Turn right.
–Follow the trail 0.3 miles as it contours and then climbs to the Five Trail Saddle.
–From Five-Trails Saddle, it’s 1.7 miles back to the car along the same paths you walked earlier.

Not Allowed: No motorized vehicles allowed. This is by order of the different property owners (private landowners, Chelan-Douglas Land Trust, and the PUD). Motorcyclists, ATVers, and snowmobilers occasionally recreate back here and they should be politely informed they are prohibited on these lands.

Land Ownership: The Sage Hills are a mixture of private, Land Trust, and PUD property. The southern portion of the trail (The Lester Trail) is open due to the generosity of the Lester family. The PUD is the largest land owner, and the 960 acres it owns are managed as wildlife habitat to replace habitat lost as a result of the Rock Island Dam. Issues: There are a variety of ‘hot’ buttons pertaining to use of the Sage Hills. Failure to use the area responsibly will threaten public access to the area in the future. 1) Make sure to park legally as described under access. 2) The desert vegetation is very fragile. Stay on the major trails and don’t follow faint new trails or fall-line spurs down steep grades (these erode badly when it rains). 3) Because most of the property is wildlife habitat managed by the PUD, the lion’s share of the area is closed to the public between December 1 and April 1.
4) County ordinances require that dogs be leashed–this is especially important on the first 1.25 miles of the walk where the trail borders private land and dogs chasing after landowner’s horses and pets has created resentment of trail users.

Leave It Better Than You found It: This should be every outdoor user’s goal. Pick up trash left by others, pull noxious weeds along your route, disperse old fire rings (they encourage more fires), throw branches over spur trails and spurs between switchbacks (make it harder to do the wrong thing than the right thing).

Important Disclaimer: Treat this information as recommendations, not gospel. Things change, conditions change, and those contributing these reports are volunteers–they may make mistakes, fail to give complete information, or may not know all the issues affecting a route. So forget about finger pointing: If things go wrong, you are completely responsible for yourself and your actions. If you can’t live with that, you are prohibited from using our information. 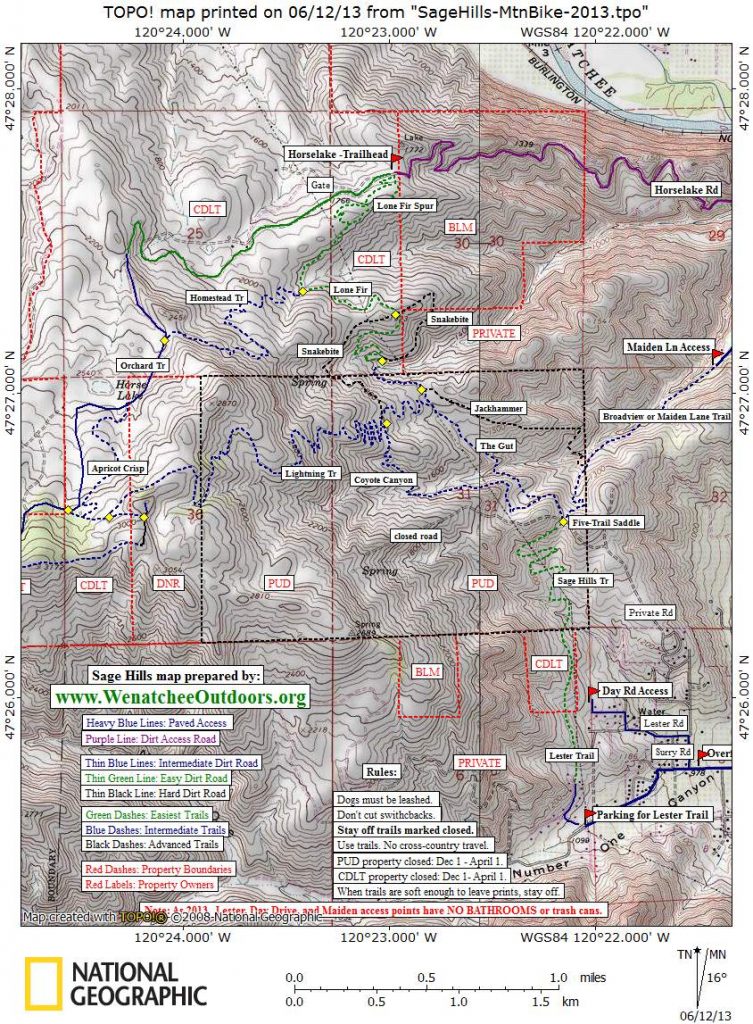