The Tieton River draining the east slopes of the Cascades some 25 miles northwest of Yakima is outside of the normal drive-to area we cover at the WenatcheeOutdoors website. But the Tieton is unusual: In September, a dam release from the Rimrock Reservoir (to benefit salmon runs) raises the river to exciting paddling levels. By this time of year, it’s the closest place we paddlers from Central Washington can find whitewater. And so we’ve included paddling information for both the Upper (class 3+) and Lower (class 2+) Tieton because many of our local paddlers will want to make the migration to Yakima for a fix of their addiction.

Why the Water Release?

Difficulty: 3+. The Tieton is not the typical river most of us boat. The rapids on the Upper Tieton, rated singly, are mainly class 2 with a few class 3 drops thrown in for good measure. But if you tip, don’t have a bombproof roll, and swim, you’re quickly in trouble here. Between the lack of eddies and the abundance of brush, branches, and logs flanking the river, there is plenty of room for harm to come your way. If you swim there’s a high likelihood you’ll have to abandon your boat and simply take care of saving your hide. All of this means that a strong roll is a prerequisite. The ability to read the river on the fly is also crucial. Because standard difficulty ratings are somewhat misrepresentative of the consequences of swimming, you might use this rule of thumb: Be a grade better than the river’s ranking. Be a Class 4 boater for the Upper Tieton and a Class 3 boater for the Lower Tieton.

Gradient: 55 feet per mile
Length: 11.5 miles
Put -In: There are quite a number of put-in possibilities near Rimrock (milepost 165.8 along Highway 12). Some options include:

River Flow Info. Flows of 1000cfs are generally considered to be the minimal flow needed to raft the river. Kayakers can probably squeak by with a little less water. Generally flows in the 1,700 to 2,000 cfs range are preferred. For river flow info, check the prerecorded info from the Bureau of Reclamation: 509-575-5854. Or use these links: 1) http://www.usbr.gov/pn/hydromet/yakima/index.html (then click on ‘Current Data’ and then on ‘Rimrock Lake.’ 2) Go directly to this river gauge.

Usage. The river gets heavy use on September weekends–it’s more of a circus than a church. Weekdays in September are relatively quiet and those disliking ‘scenes’ should use a mental health day or two to enjoy the river.

Access. From I-82 on the north end of Yakima, follow Highway 12 west toward Naches. In 17 miles, branch left on Highway 12 at the junction of Highway 410 and Highway 12. From this junction, it is about 20 miles to the put-in at Rimrock.

Mileages. The Tieton follows Highway 12 quite closely (it’s a channelized river now). We’ve used highway mileposts as well as river miles (based off the USGS maps) to identify landmarks, rapids, diversion dams, camping spots etc. There is a constant bombardment of class 2 rapids along this stretch of river and we ignore mention of these and only note the more significant class 3 rapids encountered. Use the drive to the put-in while shuttling cars to scope out the river well.

Land Managers. The land flanking much of the Tieton River is managed by the Wenatchee National Forest. Some of the lands are also part of the Oak Tree Wildlife Area.

Camping. There are several Forest Service fee campsites with flush toilets and running water along the Tieton and these include Windy Point, Willows, and Hause Creek campgrounds. In September, most of the weekend spaces at these campgrounds will need to be reserved in advance. There are also many no-fee primitive camping areas along the river and a few of these are noted in our mileage figures. Some of the primitive areas have Honey Buckets to handle human waste, most don’t. Bring your own ‘groover’ (portable toilet). If you don’t have a portable toilet yet, you should — especially for camping in high traffic areas like the Tieton. Read our article ‘Going in the Woods’ to get yourself properly outfitted. Also, bring water for primitive camping and be aware that fires are prohibited at all the primitive camping sites.

Permits. No permits are needed to run the river or to park your vehicle. 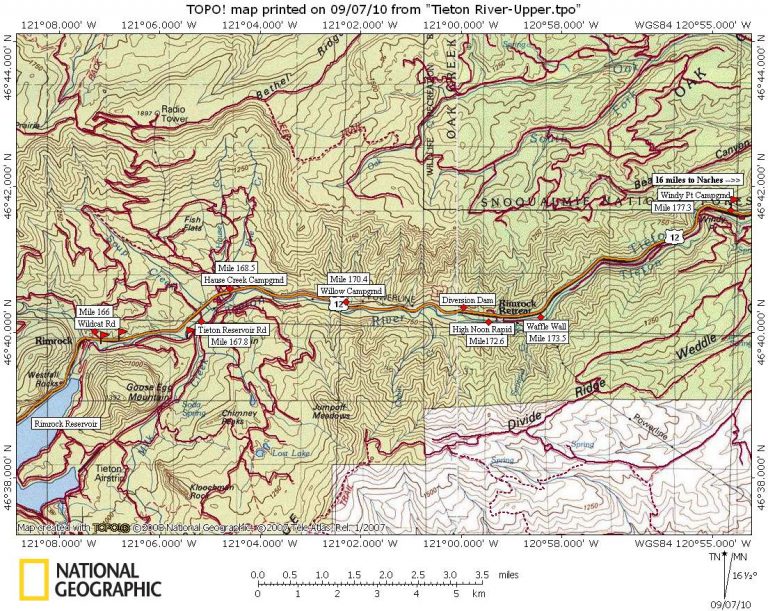