Photo: The Lower Wenatchee, a fun and scenic river for canoeists

Attractions: Rafters and whitewater kayakers consider this stretch of river (also referred to as the Lower Wenatchee) rather tame and are likely to exit the river at Cashmere. For intermediate canoeists, however, Cashmere is a good place to begin your forays on the Wenatchee. It will test you skills while exposing you to beautiful orchard lands. Canoeists with plastic boats will also find this stretch of river runnable well into the late summer.

Distance and River Flows: Distance from Cashmere to Wenatchee Confluence State Park is 10.5 miles. Distance from Monitor to Wenatchee Confluence State Park is 6 miles. Recommended river levels are from 1,000 cfs to 5,000 cfs (check the ‘River-Flows’ links under our ‘Conditions’ tab). Below 1,000 cfs there are rocks to avoid and the run gets harder, but the river is still runnable. Above 5,000 cfs expect sharp eddy lines, big waves in places and a potentially long, cold swim. The easiest level is around 2,000 cfs. The river gradient from Cashmere to the highway crossing at Wenatchee is 15 feet per mile.

Best Season. Regardless of the season, it’s a fun paddle. Obviously the risks increase in winter and early spring when the air and water temperatures are much colder.

Hazards. All those normal whitewater things—hypothermia from really cold mountain water if you tip, getting dragged under sweepers, getting pinned to boulders or bridge piers, drowning…All of which means you should know what you’re doing and you must tackle this at your own risk.

Photo Right: A canoeist who blew it.

1) The least skilled paddlers should put in at Sleepy Hollow Bridge, closer to Wenatchee. Even the river downstream from Sleepy Hollow can challenge beginners at all but medium flows.   2) Skilled canoeists can put in at Cashmere at Riverside Park, which is where commercial raft trips generally take out.  At higher flows expect to do an eddy turn immediately.  At low water you may need to carry fifty yards downstream.  An alternative put-in is on river right about a half a mile below Cashmere’s easternmost bridge. Access this put-in from Riverfront Drive.  3) For additional put-ins, take-outs, and swimming holes along the river, see this post about Wenatchee River Access Points.

Photo: Paddling around the confluence of the Wenatchee and Columbia rivers

Exiting the River. There are several options for getting back to your car. The least confusing is to paddle straight on down the Wenatchee River to the Columbia, and then head upstream if you are going to Wenatchee Confluence State Park, or downstream if you are taking out at Walla Walla Point Park. If Wenatchee Confluence State Park is your destination, hug the far left bank at the Railroad Bridge which will put you into a slough system that comes out on the Columbia close to the park. If your destination is Walla Walla Point Park, take the slough on the right just before reaching the Columbia. At very low water levels getting through these sloughs can be a challenge. The distance from the highway bridge to Wenatchee Confluence State Park is approximately 1 mile. The distance to Walla Walla Point Park is approximately 1.75 miles.

Guidebooks. No published guidebook carry as much information on the Lower Wenatchee River as this website, but a nice schematic of the stretch is printed in Paddle Routes of the Inland Northwest by Rich Landers and Dan Hansen (The Mountaineers).

Fees. None at either end.

Additional Information. For a complete list of access points on the Wenatchee River, check out this information prepared by Richard and Kathy Spencer. 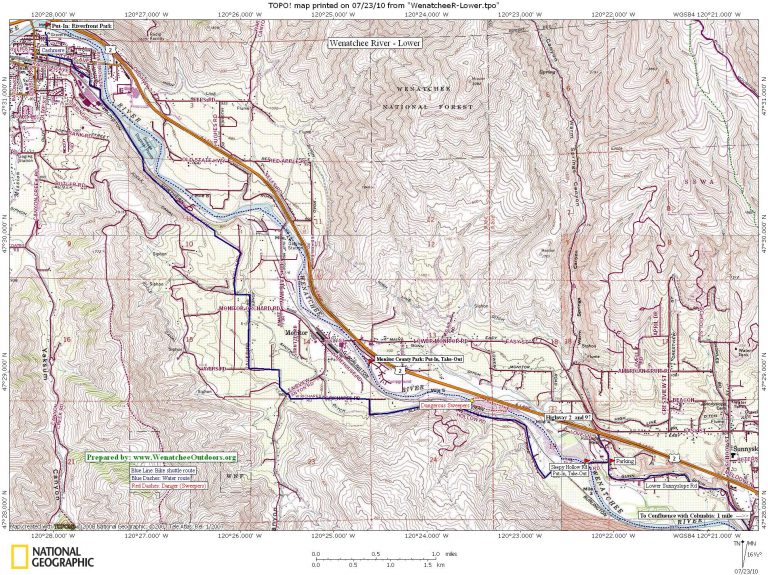 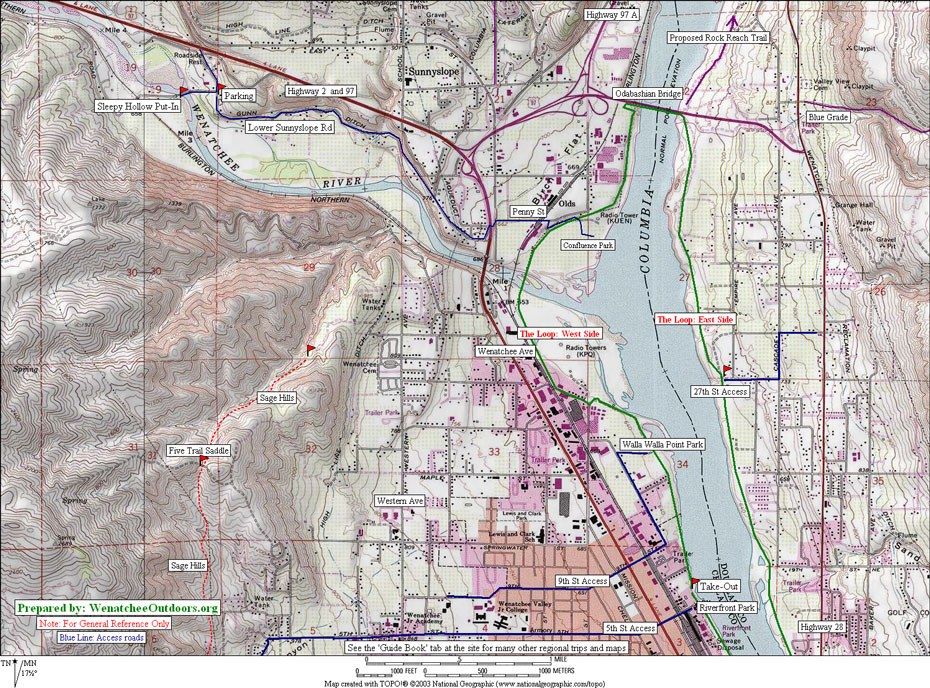