Photo: Skiing toward Snowgrass Mountain while traversing the Chiwaukum Range.


“The Chiwaukum Mountains rise to 8,000 feet, the first range south of the Stevens Pass Highway corridor…. the range can give a feeling of grandness, especially while hiking into its deepest basins or across its highest passes….Lying little more than five miles east of the Cascade Crest, and thrust a thousand feet higher than summits along the divide, the Chiwaukums (receive) enough moisture from winter snowpack and summer rainstorms to create large areas of lush vegetation.” – East of the Divide by Chester Marler.

Traversing the Chiwaukums
by Andy Dappen with photos from Coron Polley
The sky was already an ominous gray as Coron Polley, Tom Janisch, and I left the Icicle River following the Chatter Creek Trail toward the Chiwaukum Range on Sunday morning. We walked hoping that Friday’s weather forecast (unseasonably cool with fair weather until Monday night) would return to replace Saturday’s newer forecast (warmer, wetter weather would deliver rain by Sunday night). Not having checked the forecast on Saturday, I had packed my uber-light raincoat and a plump down coat that would help keep me warm in a 1.5-pound sleeping bag during unseasonably cool weather. Upward we went with me pondering the better rain coat and the Polarguard coat I should have brought for what might become a wet trip. “I hate skiing in the rain,” I thought as we followed this steep trail that stair-stepped into the sky.

A few hours of climbing brought us to the doorstep of snowcountry at about 4,800 feet. By 5,300 feet, intermittent snow had turned into a wall-to-wall white carpet and the antlers we carried fell off our packs and snapped onto feet. Soon we were striding beside Lake Edna telling stories of old autumn trips through the area when the green larches had gone gold, the blueberries had gone red, and the emerald Lake Edna had gone, well, emerald.

Onward we strode toward Snowgrass Mountain, which was occasionally tickling the bottom of clouds, occasionally disappearing in one of those hungry, gray amoebas. Saturday’s pessimistic forecast was looking more probable than the rose-colored forecast of Friday, but Snowgrass Mountain, rewarded our efforts to climb it. The clouds lifted as we approached and, from the top, we witnessed the crumpled chaos of this sub-range of the Cascades characterized by black craggy summit ridges and wide basins scooped by the spoons of now extinct pocket glaciers.

Photo Right: On the summit of Snowgrass Mountain.

From Snowgrass, we knew camp at the bottom of the colossal toilet bowl containing Lake Charles would soon be reached. Here we would pull sweat-soaked feet from plastic-shelled boots and, with cups of tea in hand, feast our eyes upon our Cascadian kingdom. Or so we thought. The col (7,500 feet) providing our portal to the lake and looking so innocuous from Snowgrass Mountain proved to be fortified by rock slabs and splintered crags that were dangerous for oafs of our ilk to scramble in ski boots.

We explored several leads through the rock barrier but, without a rope, these looked like pleasant invitations for a gruesome bludgeoning by gravity. Eventually the intrepid Coron, embarrassed by the feeble efforts of his elders, split off and explored a scramble that, with just a few exposed moves, provided successful passage to the pass. From this gap, we skied the spectacular but mushy slopes down to the imprisoned waters of Lake Charles.

Photo Left and Right: Descending into the colossal toilet bowl of Lake Charles.

Much later than we anticipated, we set up camp beside a snow-free island of scree and kicked back to watch the sun set. It was a beautiful show with rising popcorn clouds that glowed pink and distant banks of alto-cumulous clouds that flamed red. It was certainly a sailor’s delight and we settled into the tent knowing that Friday’s fantastic forecast had returned – uberlight raincoats and heavier down coats were apparently the wardrobes of geniuses.

When I pulled my earplugs early Monday morning, however, all traces of genius had leaked from my ears. Rather than silence, I heard rain drumming our canopy. In such weather even Tom Janisch, the ever-enthusiastic Labrador retriever, was content to huddle in the tent and wait. We slept, we made coffee, we made more coffee, and finally there was nothing to do but face the weather.

Suburbia rolled into a wet wad and was stuffed into packs and, clad in our Leaktex storm shells and Absorbtex ski pants, we strode upward into the mist. The visibility improved as we climbed and, several hundred vertical feet below the summit of Big Chiwaukum, we pondered booting up a very steep snow gulley to make the top but were deterred by the disconcertingly soft snow, Instead we contoured to a 7800-foot shoulder north of the summit where we looked west over the other side of the peak into an even thicker reservoir of moisture being dammed by the barrier of this divide.

Photo Left: Near the summit of Big Chiwaukum looking into clouds dammed by the divide.

We stripped skins and descended to a 7,400-foot pass hovering above Cup Lake. The plan had been to visit Cup Lake, climb to McCue Ridge, and move along this north-south spur until we intersected the Chiwaukum Birthday Tour  that Tom and I had skied a few years ago. We would finish this traverse with a steep descent of The Swath which would drop us down into the Highway 2 corridor. Given the day’s soupy weather and the ongoing drizzle, we opted for a more direct exit that had us contouring steep slopes over to Deadhorse Pass (7,200’).
Photo Right: Soupy days make for soupy views.

From here we enjoyed buttery turns through the spring snowpack as we descended consolidated west-facing slopes all the way down to the Wildhorse Trail (4,950′). The trail was still snow-covered, but as we followed it north for half a mile, the snow became patchy and we saddled up the skis. Over the next few hours as we dropped down the Wildhorse and Whitepine trails leading to the car, we talked about different trips we had each taken in this area. The common denominator of our adventures was that none of us seemed to see people back in this forgotten corner of our local mountains.

Photo Left: The downward migration leading from winter to spring.

The drizzle continued, we were damp from rain and sweat, but the walk through the dripping cedar forest with neon green new growth, rain-spackled trilliums, and optic yellow violets was beautiful. Curiously I found myself thinking, “I love walking in the rain.”

Photo Right: Moisturized trillium lilies. Below Left: When there’s a trail, slide alder can be pretty.

Maps: See maps of the route below for more information. 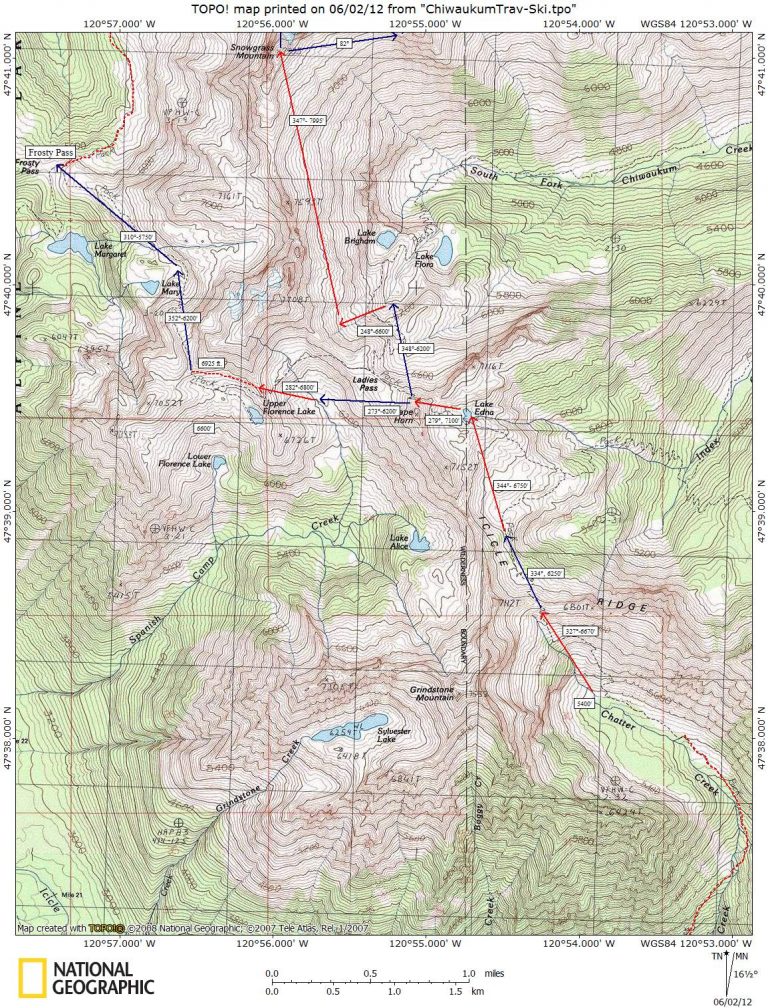 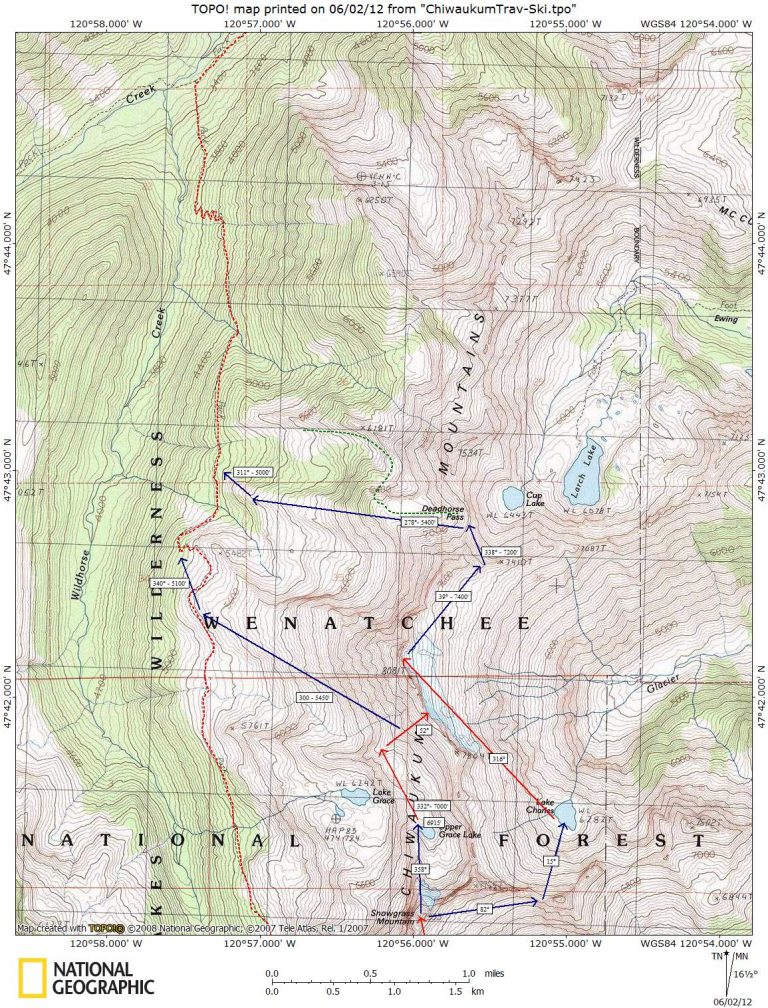