“We’re going to get sick of all the questions,” Mike Rolfs jokes while we saddle-up the packs and start walking the Phelps Creek Trail toward Spider Meadows.

It’s 6:15 p.m. on a summer Saturday and most of the day traffic using this popular trail has already come and gone but, over the next hour, we still pass a dozen stragglers stomping down the trail and, sure enough, they all have questions: “Where are you going with those?”, “Didn’t you know winter is over?”, “Are you some of those Turns-All-Year guys?”

Mike is right – carrying skis on your pack on August 25th is a sure-fire conversation starter. That would be a problem if you were a solitude seeker, but Mike and I enjoy chatting with the different groups. We get a glimpse of their stories, and they get a glimpse of ours. Even if there is no snow up there, the skis give us a chance to interact.

Photo Left: Didn’t your hear? It’s officially summer.
They’re also a personality test –- a wilderness Rorshach inkblot test — allowing Mike and me a chance to psychoanalyze. After talking to people, we fabricate the intricacies of why they acted as they did. This provides laughs as we plod uphill with the excess baggage of ski gear.

We’re particularly humored by ‘Grumpy Lady’ who is camped with a small group near the trail above Spider Meadows. “You won’t be using those much,” she tells us with an almost angry edge to her voice. We try to engage her in pleasant banter and learn she’s already been up higher. “Not worth taking those up there,” she says dismissively, nodding at our skis. We tell her we hope to ski Chiwawa Mountain, accessed by dropping down the far side of Spider Gap, and ask whether she noticed the north slopes of the mountain. “There’s hardly any snow,” she says. “You’re wasting your time.”

Once she’s out of hearing range, we start the psychoanalysis. We float various theories. Eventually we decide she’s angry at men – her father dropped her on her head too many times, or she’s going through a divorce, or her husband just forgot their anniversary. Most likely, her husband dragged her out here against her will on a trip that was too hard and belittled her for not keeping up. “Now she wants to make sure no man has any fun,” Mike says.

As we walk, color leaks steadily from our surroundings. The sky turns from steel gray to slate to charcoal. Headlights are pulled from packs and we continue up the trail following their focused beams.

Around 9:30 p.m. we reach the end of the trail and the beginning of the permanent snowfields leading to Spider Gap. A stream gushes from the snowfields and we each fill up several water bottles in preparation for our waterless bivouac at Spider Gap; then we walk onward. Higher up, a half moon paints the snow around us with enough silvery light to cast a shadow. We turn off the headlamps and listen to the crunch of frozen snow underfoot as we walk. “You’re wasting your time,” Mike says, imitating Grumpy Lady.

We reach Spider Gap close to 10:30 p.m., find a bivouac platform slightly protected from the breeze flowing through the gap, boil up some water for soup, and settle into our bivy sacks for a night under the stars. The Big Dipper, Cassiopeia, and Cepheus swirl through the sky overhead. I stargaze as I blink in and out of sleep. Very early in the morning, I dimly register that the moon has set – Cassiopeia is overhead but the Milky Way is so bright I can barely distinguish the marker stars.

Close to 8 a.m., we rise and move to a perch with a fall-away view of Lyman Lakes below us and Dome Peak in the distance. The upper lakes are turquoise, the surrounding cliffs rusty red, the lower meadows vibrant green, the distant mountains slate gray, the sky deep blue. It’s hard not to keep snapping redundant pictures of the palette before us.

We boil water for oatmeal and coffee and wait. Summer skiing is a game of timing. The sun needs to do its work — turning hard ice to edgeable gelato — before we do our work. At 10:00 a.m., we ski down from the gap about 600 vertical feet on snow that is only halfway softened. It’s not rock hard but all the irregularities still rattle glasses from noses.

Next, we traverse to skier’s left onto the big slopes connecting Upper Lyman Lakes to the summit of Chiwawa Mountain. At this time of year the melt-off has exposed slabs of polished rock, small fields of glacial ice, and a few widening crevasses. But meandering around these obstacles is a line that looks imminently skiable at the right time of day. We click on crampons, strap skis to our packs, and kick steps up the route we intend to ski. In a few hours we’re on the summit.

Around 1 p.m., the snow for our descent is about perfectly cooked—it’s soft but not mushy. We start down making cautious turns. A fall on the initial steeps could send a body sliding toward the maw of an unhealthy bergschrund. We thread around the end of the bergschrund and snap a few pictures as we descend slopes of moderate angle. Soon the pitch steepens again and we enter a pinball alley where a fall could have us ricocheting between rock outcrops. The snow consistency is excellent and we squirt out of the bottom alive and unbroken.

Photo Right: Pleasure turns between steep segments.
Mike, pleased he has lived to be obnoxious for yet another day, unleashes the restraints. He carves wide, high-speed arcs and uncorks a mile-long string of whoops as he finishes the remainder of this 2300-vertical-foot descent in one sprint leading to the edge of the highest lake. The sound waves of his exuberance echo off the surrounding walls. Everyone within a mile’s radius is probably annoyed.

We congregate at the lake and, in high spirits, pack up the skis and climb back to our bivouac spot at Spider Gap. At the gap, we enjoy one more dollop of skiing as we descend about 1000 vertical feet toward Spider Meadows. Then we become the mules of our boards for the remainder of our walk to the car.

For Mike, who would climb a mountain for a molehill of skiing, the decision to bring skis on this effort has been a no-brainer. Even for me, who feels at least half of your vertical should be skiable to offset the effort of toting the extra weight, I’m happy we opted to ski rather than walk the Chiwawa.

And that says nothing about the conversation value of boards. “Those sure look like the ticket,” says one hiker we pass near Spider Gap who seems genuinely curious about what we’ve been doing. Mike is enthused to show him our line and highlight the fun hikers are missing.

“Isn’t that a ton of weight for a little fun?” says another hiker we pass farther along.

Ha! Psychoanalyzing his negativity is great fun. It also draws us another mile closer to the car.

Fitness: 3 (advanced) as a day trip, 2+ (advanced intermediate) as an overnight trip.

Access. Follow Highway 2 to Coles Corner, then drive 4.4 miles on Highway 207 in a northeasterly direction past Lake Wenatchee State Park to a bridge crossing the Wenatchee River. Just past the bridge, leave Highway 207 by staying right at a fork and then veer right again at the next fork onto the Chiwawa Loop Road. About 5.75 miles from Coles Corner, the Chiwawa Valley Road branches off to the left (some maps refer to this as the Meadows Creek Road). Turn left and follow the road about 2.7 miles to a bridge across the Chiwawa River. Cross the river and, about 0.3 miles later, curve left (remain on the paved road). The paved road becomes State Highway 3, which is also called the Chiwawa River Road. Keep following this in a northwesterly direction and (about 8 miles from the bridge across the Chiwawa River) the road turns to gravel. Go another 10.75 miles and, at a prominent fork, veer right onto the Phelps Creek Road. Drive uphill more steeply for 2.25 miles until the road ends at the trailhead (elevation 3,500 feet). The gravel road is well maintained and can be driven by low-clearance vehicles. A Northwest Forest Pass is required to park.

Descent. Retrace the route. If skiing, enjoy the downhill run all the way down to the highest Lyman Lake at the base of the Lyman Glacier (6,000’).

Hazards. Big avalanches roar down Chiwawa in winter, spring, and early. By early July the snowpack is usually bombproof but the slopes are steep enough to be concerned about uncontrolled slides.

Equipment Needs: Normal day or overnight kit (including avalanche gear in early season). Ice axe and crampons to climb the Lyman Glacier to the summit. Skiers might substitute self-arrest poles for an axe. Although not heavily crevassed, there are some crevasses on the glacier and a bergshrund can form on the upper glacier. We felt comfortable completing this route without a rope and harness, but sticklers for safety might recommend otherwise. Your call on that one.

Not allowed: Much of the trip is in the Glacier Peak Wilderness so wilderness rules apply here.

Holden Details. Early season skiers who want to ski/climb Chiwawa Mountain before the snow melts on the Chiwawa River Road can take the ferry up Lake Chelan, take the bus to Holden Village, and hike/ski to Lyman Lake. Contact Holden Village by voicemail (# in the phone book) to reserve a bus ride ($10). The bus makes two trips a day: one to meet Lady of the Lake II leaving Holden at 1:30 p.m., the other to meet Lady Express leaving Holden at about 11 a.m. Lunch can also be purchased at the village.

Ferry Details. Get the ferry schedule or reserve a place on the ferry through the internet or by phone: (www.ladyofthelake.com, 509-682-2399). 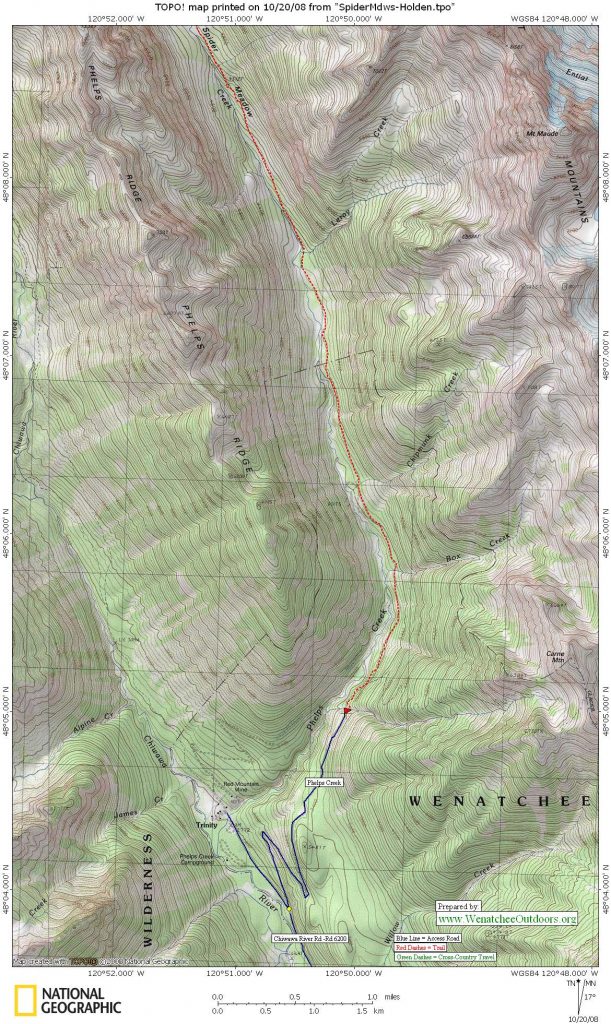 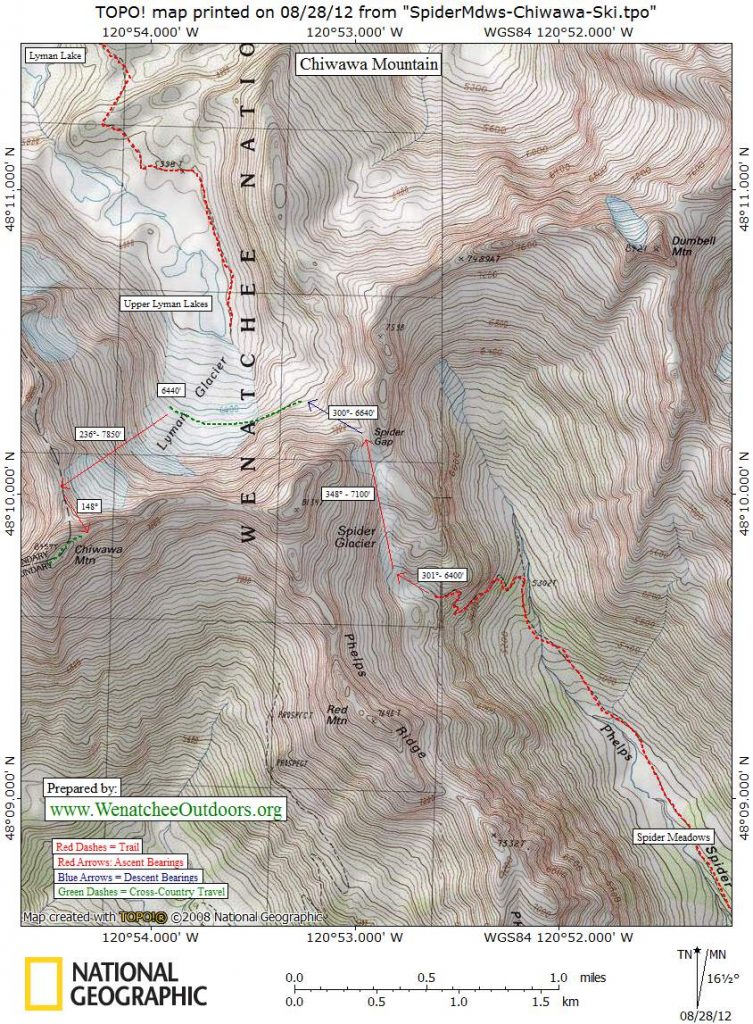