A chorus of waterfalls tumbled from lingering snow and rust-red rock into the lush valley below, collecting to form the Chiwawa River from a myriad of meltwater trickles. Lined by paintbrush, lupine, and anemone, the scene was very reminiscent of a much more populated valley one drainage to the east – Spider Meadows. But instead, we walked along a narrow, fading path through the avalanche meadows of the upper Chiwawa Valley, entirely to ourselves. Entering the first of the Chiwawa Valley’s meadows.

Our trip objectives – Chiwawa and Fortress mountains – dominated the skyline, while our short term objective – a bench at approximately 6300 feet rumored to have good camps – hovered just above what looked to be a mere few hundred feet of bushwacking chaos.

Chaos though it was, it was short lived, and sporadic flagging and bootpaths helped to make the way a little clearer. A wet gully scramble brought us the sought-after bench, with just enough bare dirt to accommodate two small tents. That evening we summited Chiwawa Mountain, nothing more than some moderate snow and scree-coated walk up. Several nicely shaped rocks convinced me (they were extremely persuasive) to nap on the summit – an extended stay at the luxurious Chiwawa Mountain Summit Bivy may be in order in the future. The ideal campsite for storming the Fortress, looming just behind.

The climb to Fortress Mountain on day two was the delicious, sugar-loaded icing on an already outstanding cake. Aiming for the notch in the east ridge, we traversed some moderate snow that steepened and softened as we reached the ridge. Some loose and scrambly (but never too loose and scrambly) rock was our stairway to heaven, the broad, 8674’ summit of Fortress.

The Dakobed Range, Glacier Peak, Mt. Baker, Bonanza, Fernow, Buck – the peak viewing list was probably infinite. We were in the real heart of the Cascades. Buck Pass, Spider Gap, Miner’s Ridge – all sorts of destinations that backpackers swarm like little Gore-Tex outfitted moths to a lamp – surrounded us, but on this individual rocky point in space? Still not a soul in sight.

Skill: From a hiking perspective, this is a 4 (expert). From a mountaineering perspective, more of a 1+ (advanced beginner). The route is not suited for those inexperienced with cross-country travel, snow travel, or scrambling on class 3-4 rock.

Fitness: If done as an overnight, 2+ (hard intermediate)

Distance: If a sidetrip up Chiwawa Mtn is included, the route is about 20 miles round trip.

Access. Follow Highway 2 to Coles Corner, then drive 4.4 miles on Highway 207 past Lake Wenatchee State Park to a bridge crossing the Wenatchee River. Shortly past the bridge, leave Highway 207 by staying right at a fork and then veering right again at the next fork onto the Chiwawa Loop Road. About 5.75 miles from Coles Corner, the Chiwawa Valley Road branches left. Turn left and follow the road 2.7 miles to a bridge across the Chiwawa River. Cross the river and, about 0.3 miles later, curve left (remain on the paved road). The paved road becomes State Highway 3, which is also called the Chiwawa River Road. Follow this in a northwesterly direction. In eight miles the road turns to gravel, then in another 10.75 miles (at a prominent fork), go straight to Trinity (0.75 miles farther).

Trip Instructions:
* Begin hiking on the Buck Creek Trail. At 1.4 miles, go right at a junction. You are now on the Chiwawa River Trail, an old road grade.
* At 5 miles, go left, continuing on the Chiwawa River trail. The right fork climbs to Red Mountain.
* The trail takes a winding, indirect path, but ultimately comes to a crossing of the Chiwawa River.
* Ford the “river” and walk along the right edge of the meadow, following the tree line. Look for a trail branching right. It’s easy to miss. If you find this trail, it will take you to an avalanche chute just below a 5500’ basin (see map), where some follow-your-nose bushwacking straight uphill will get you there. If you miss the trail, and are unable to find flagging (or any other sign that people have been there before you), just aim for the 5500’ basin (visible above, below the spur ridge) and ‘schwack’ your way uphill — the forest is generally open and lacking huge, frustrating amounts of underbrush. Nearing the summit of Fortress.

* Once you reach the basin, a number of ways can take you to the 6300’ bench housing the best campsites. Early in the season, snow gullies warranting ice axes can provide direct routes. Most times of year, however, the way will be less obvious. Heading up, we found the left-trending gully (most obvious gully farthest to climber’s left) to be direct and relatively easy, albeit a little wet and probably not ideal for the descent. The treed slopes to climbers left of the gully provided a veggie-belay ridden descent on our second day, and may provide an easier way up. Use your own judgement to decide which route would work best for you given conditions.

* Upon gaining the ridge, traverse some steep heather to the flat bench at 6300’, flanked by krummholz and small trickling streams that provide sufficient water. Fortress is on your left, Chiwawa on your right. A snow and rock traverse, followed by moderate snow early in the season, will take you to Chiwawa’s summit. Aim for the scree slope near the right skyline (SW Slope), and avoid the left skyline. More details on climbing Chiwawa can be found here.

* To climb Fortress, aim for the broad notch in the East Ridge. During most of the year, moderate snow slopes will take you from the bench to the notch, steepening the closer you get. Ice axes are recommended, though late in the season, reaching the notch may just consist of rather unpleasant choss and talus.
* Upon reaching the notch, head left and pick your way over blocks and loose talus, to gain the ridge crest. It is important to stay as close to ridge crest as possible – climber’s right is extremely exposed, and climber’s left (the face) is extremely loose, sandy, and hazardous. Once on the ridge, the rock is generally fairly solid, and involves following the path of least resistance over class 3-4 terrain.
* A clean chimney on an otherwise blank and imposing rock block will get you through what some consider to be the crux. From there, the ridge flattens out, and turns into a mainly class 2 traverse over boulders and ledges to the farthest high point, the true summit at 8674’. Glacier Peak is right in your face, and the panoramas of the surrounding highlands are spectacular — relax and enjoy it. Descend the way you came. 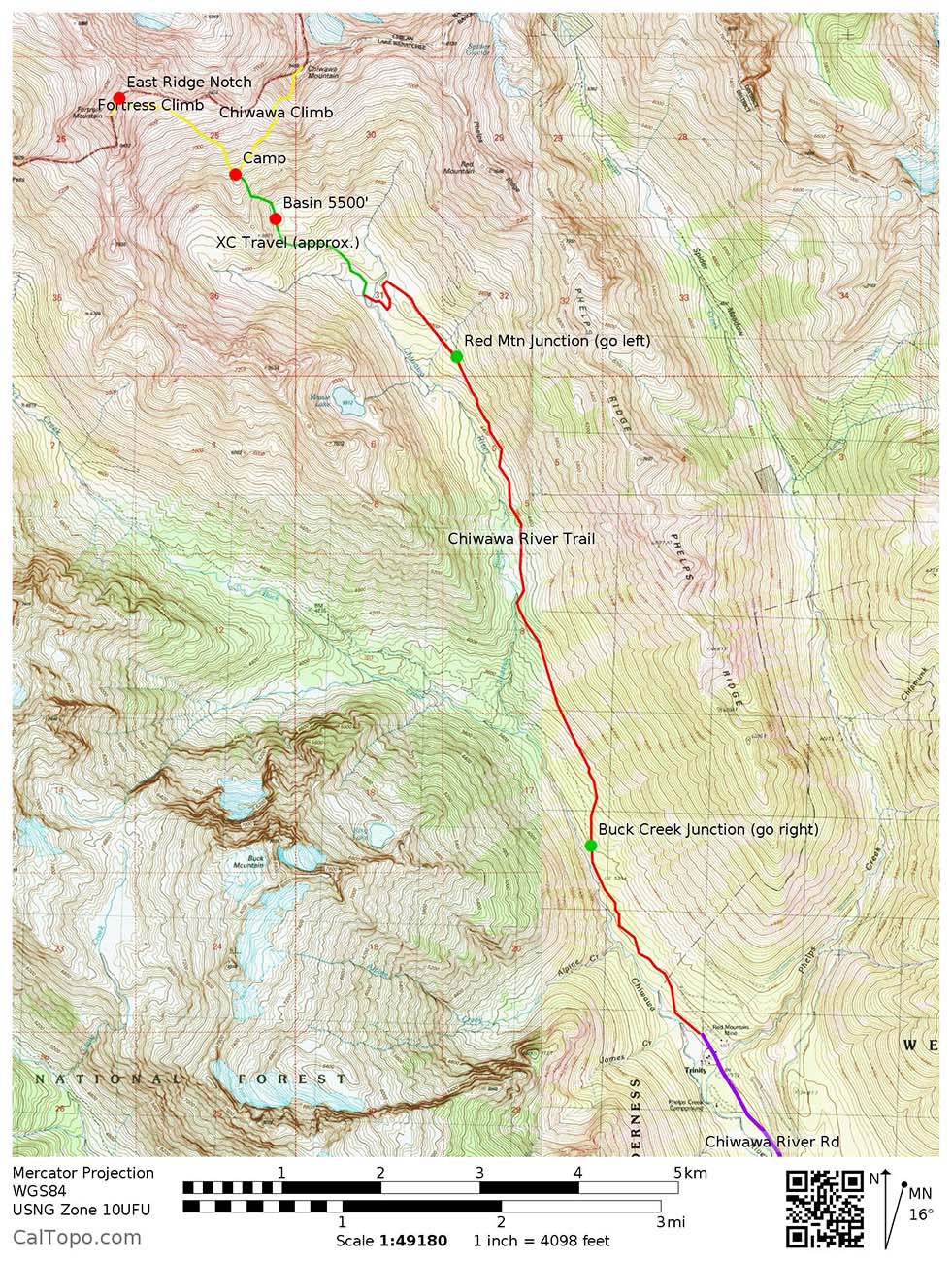 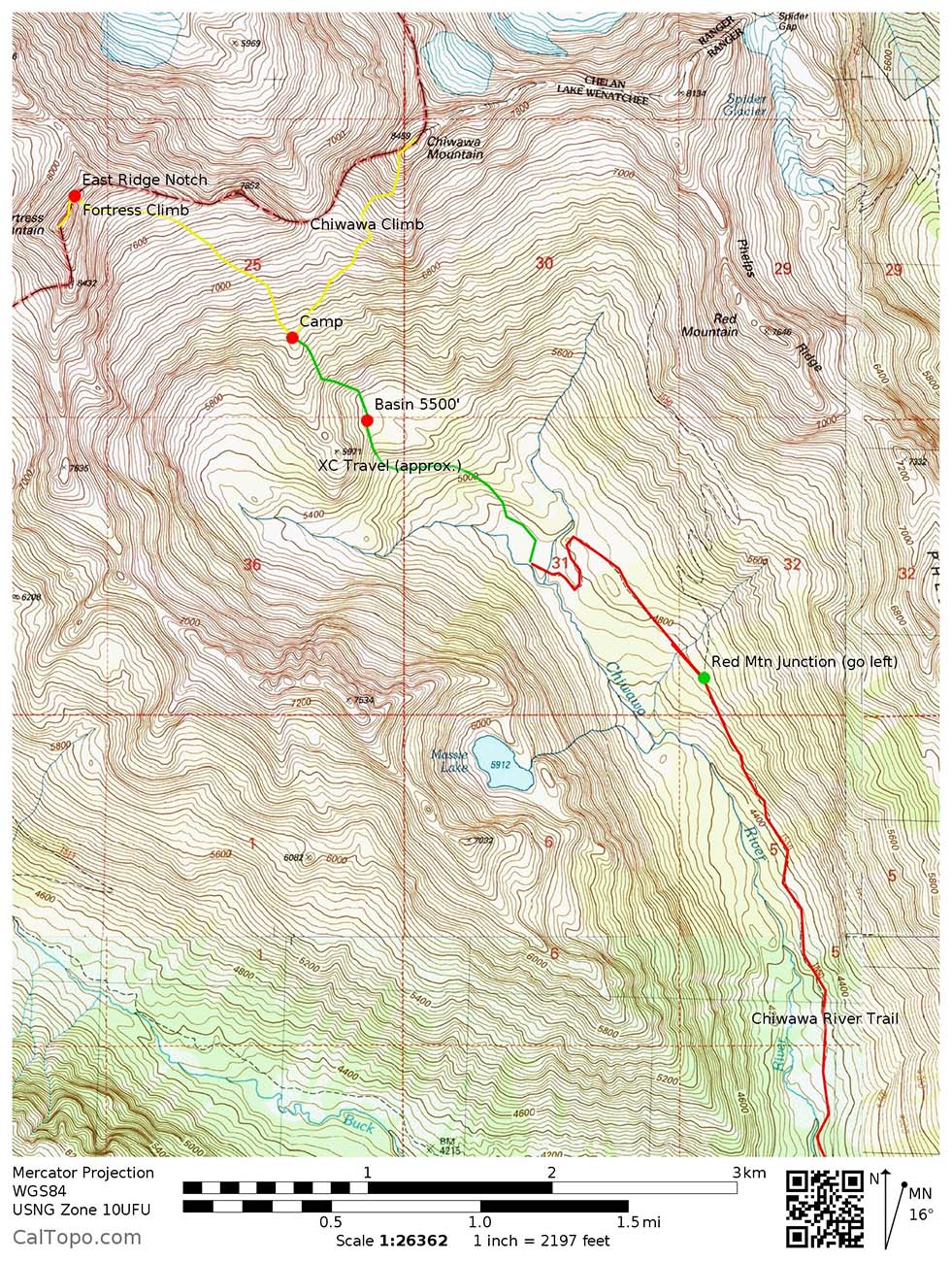