The Wallowa Mountains, a fault-block range of shark’s teeth rising to nearly 10,000 feet and towering over the plains of northeastern Oregon, are the mountains where I cut my teeth as a backcountry skier. Like most locations where we develop a passion, the Wallowas harbor many memories near and dear to me. I haven’t been back to those mountains of memory for many years now, but as I tour up Reynolds Creek toward Rennie Peak in the Chelan Sawtooth Mountains, I keep thinking about the Wallowaesque nature of this terrain.

Like the Wallowas the peaks surrounding me have a similar look with their sheer north faces and their more skiable slopes sprinkled around the other compass points. Like the Wallowas these peaks pack a punch of relief as they rise 5,000 to 6,000 vertical feet from the valleys in which they are rooted. And like the Wallowas the ridgeline glades of whitebark pine give the area a vegetative similarity. Some of the differences, however, are also vegetative. Besides hosting stately groves of wind-twisted whitebark pine, the peaks surrounding me, unlike the Wallowas, are also heavily salted with one of the most beautiful of high-mountain trees: alpine larches. And then there’s the empty nature of these peaks versus the Wallowas. Writing scum like me have helped skiers discover and plunder the Wallowas, but the Chelan Sawtooths pass the winters with very few plank-footed visitors – they are like the Wallowas I visited some 40 years ago.

It’s hard to know what catalyzed this analysis between Chelan Sawtooth Mountains and the Wallowas, but such comparison speaks highly of the emotion these mountains kindle as Tom Janisch and I move into the subalpine slopes near the headwaters of Reynolds Creek.

It’s early May and while these slopes would have been good destinations for powder skiers before early April, now the heat of spring has caught up with us and has baked the snowpack into an isothermal mush that’s more water than snow. On moderately steep slopes the snow cut by skis slithers downhill as a slow, point-release avalanche. We both know, however, that getting such snow sliding on really steep slopes releases a monster that moves with the speed and power of a freight train.

We decide the slopes we had planned to follow up the south summit of Reynolds Peak are too steep for sensible travel given these snow conditions. We discuss options as we ski up Reynolds Creek and decide to focus our attention on the more judicious terrain leading to and then up the SE ridge of Rennie Peak. At an elevation of about 5,700 feet  we move out of dense trees into sub alpine terrain with thinning forests and hillside clearings offering long views. Tom dubs this the Land of Yeehabas and the label sticks. Despite the heat of this fine May day and the sweat streaming down our faces, we’re both engrossed with the setting and the associations we draw to other places. Around 4 p.m. we reach the summit of Rennie Peak where we lounge for an hour enjoying the long views and surprising ourselves in just how few peaks we can identify from this angle. Clearly a return trip to Yeehabaville with a broader scale map is in order.

From the summit of Rennie, we descend nervously along the corniced SE ridge until we have a straight shot down toward our intended camp. Now, as lemon light tints our turns, the skiing is nothing but pure pleasure. Above: Scoping out the fine line between tierra firma and tierra killya. Below: Pumping out pleasure turns. We camp in the headwaters of Boulder Creek at the 6,200-foot level. While we attend to camp chores the sun slowly blinks off while the stars blink on. Just like the Wallowas this is an isolated corner of the Northwest and the firmament overhead is pricked with innumerable pinholes. One could develop serious chiropractic issues crimping back the neck and shouldering so much wonder.

The next morning we are on the move by 6:30 a.m. in hopes of capitalizing on the light freeze that iced over the surface of the snow. Steep slopes will be anchored by this crust but the stability will dissolve quickly as morning progresses and the mushy snows of yesterday return. From camp we climb up the southwest ridge of North Reynolds Peak. With the orange rays of the rising sun washing over us, it’s a spectacular climb to the summit. Then comes the long run off the top that gives us a 3,300-vertical-foot drop down northeastern slopes leading back to the Reynolds Creek Trail we traveled yesterday. The snow up high has a soft skin that skis beautifully. As we drop, the snow softens and becomes a slurry — soon we’re making turns and looking over shoulders to make sure the 400-pound snowballs our skis set in motion don’t bowl us down. At around the 6,500 foot level, I stop to absorb the surroundings while the views are still long, the trees still thin. Gladed and burned slopes I can see on the far ridge remind me of the slopes in the Wallowas around Salt Creek and McCully Basin. What really grabs my attention, however, is the immensity of this area. The Wallowas are a dramatic but confined range of peak – a mouthful of mountains that you can easily wrap your head around. With single-minded intensity, it wouldn’t take much more than a year to hike/climb/ski all of the major peaks there. The viewshed surrounding us is quite a different animal – Methuselah might get around to scaling all these peaks but, in this life, Tom and I are simply not going to have time to take all this in.

Pie in the sky: Just a small sliver of the surrounding pie.

The nearest access points into the Chelan-Sawtooth Wilderness are from Lake Chelan. Because these rely on boat rides up the lake, however, they are certainly not the most practical access points. Accessing from the town of Twisp is much easier and, although this entails a longer drive than what is normally covered at this website, the mountains themselves are in our territory. Furthermore, compared to driving to northeastern Oregon, those of us living in Central Washington can get a Wallowaesque experience with dramatically less road time by visiting the Chelan Sawtooths.

Skill: 3 (advanced) for backcountry skiers; 1+ or 2- (advanced beginner) for mountaineers. Strong parties traveling with good snow conditions could do this route as a long day trip but most parties will want to budget 2 days.

Hazards. All routes shown on our map are exposed to avalanches — know the snow conditions and stay off slopes when they might be hazardous.

Condition Update. As of May 2013 the trail up Reynolds Creek hadn’t seen a chainsaw crew or a brush crew for a few seasons. The trail is passable but brush is encroaching on the edges and there was a moderate amount of deadfall across the trail that had to be stepped over, walked around, or crawled under. Typically this isn’t hard but it burns a lot more time than you might expect.

Recommend Gear. Bring the usual backcountry kit. In May and June when freeze-thaw snow conditions are likely, ski crampons are highly recommended. We didn’t need foot crampons or ice axes on our trip, but after a hard evening freeze foot crampons would prove useful. We also recommend bringing a folding pruning saw. If visitors helped cut some of the smaller deadfall, pruned some of the vine maples, and cleared some of the fallen branches, the access for everyone would be much improved.


Leave It Better Than You Found It. This should be every outdoor user’s goal. Pick up trash left by others, pull some noxious weeds along your route, throw branches over unwanted spur trails, don’t ride or walk wet trails when you’re leaving ruts/footprints deeper than ¼ inch… 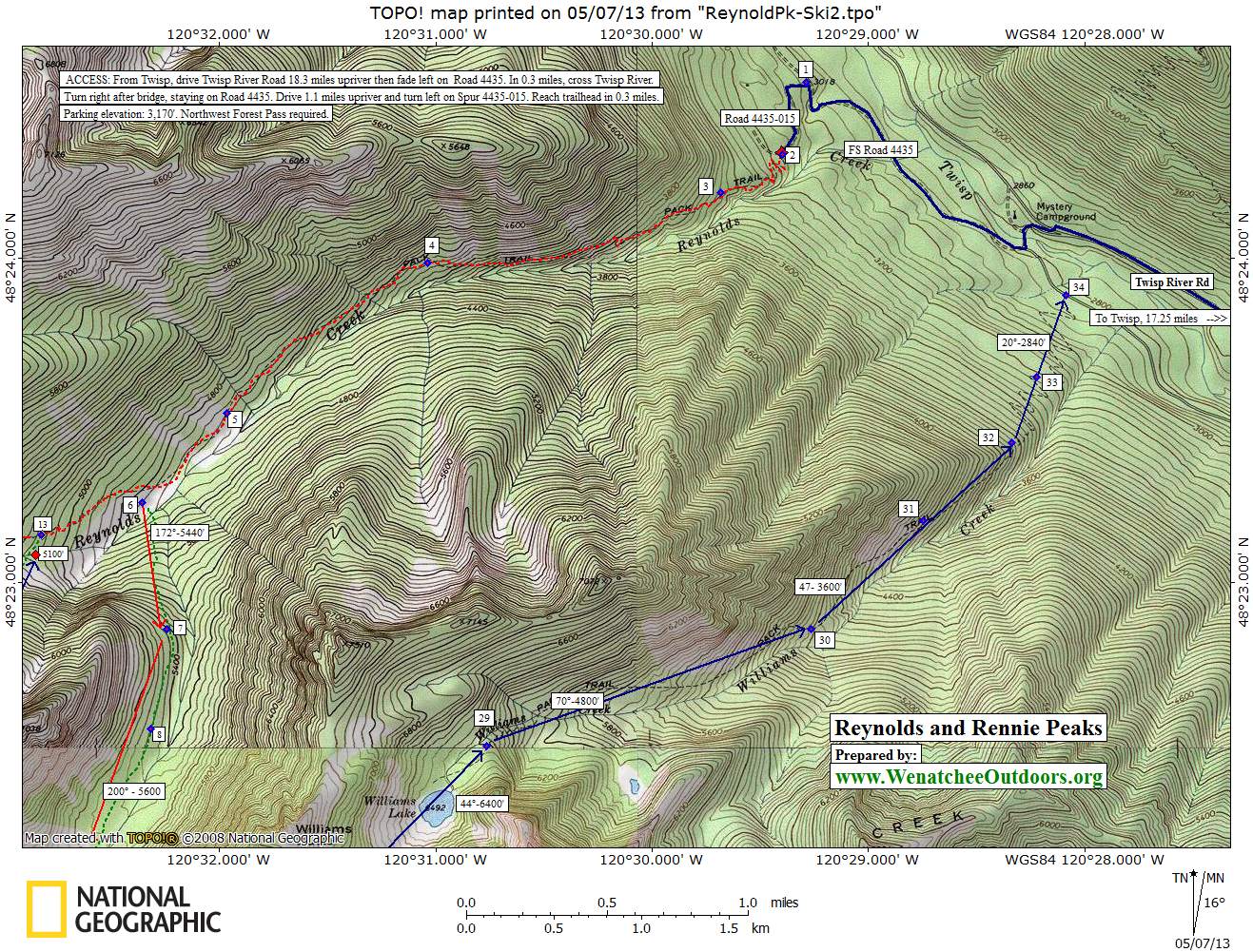 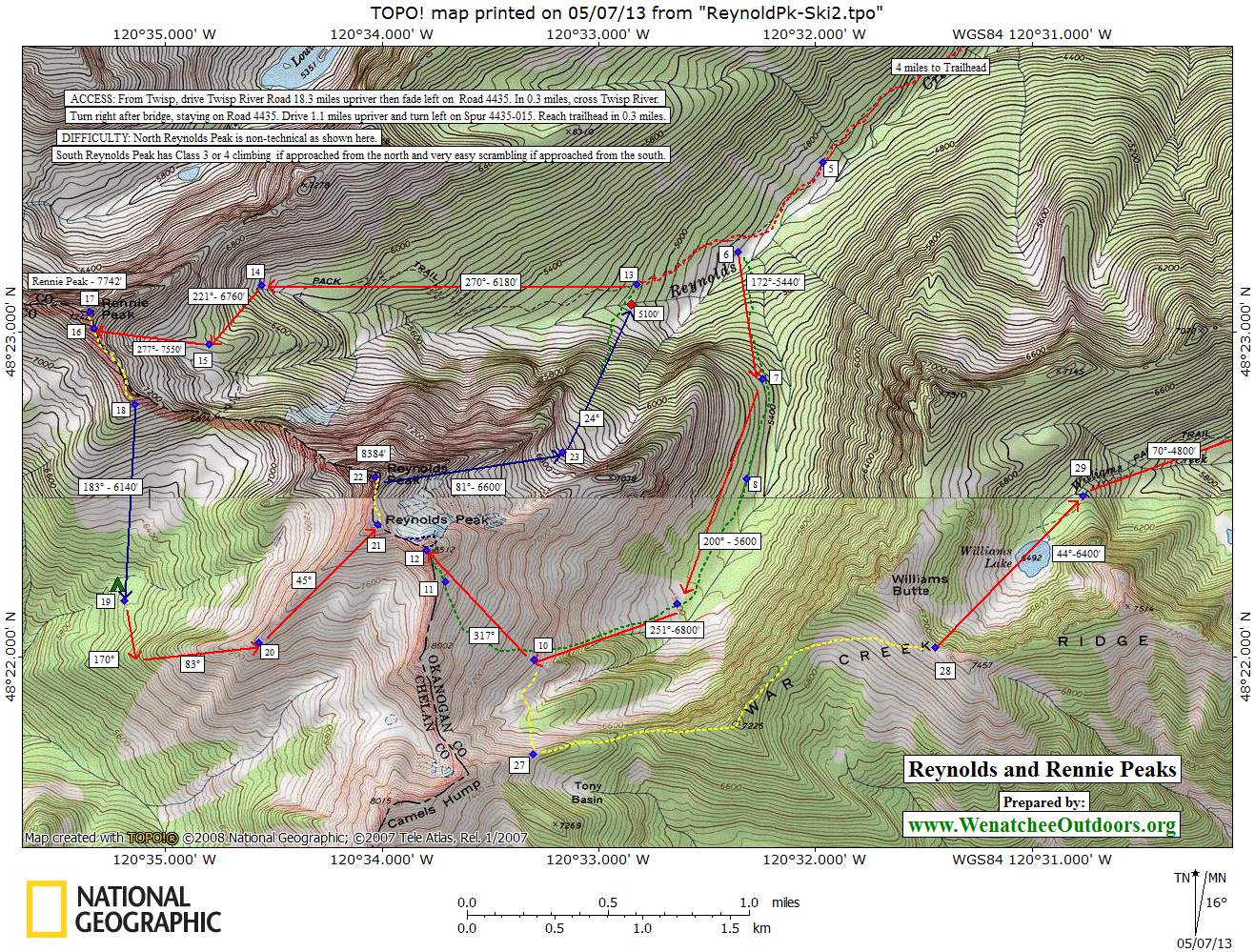