Photo: Scenery as seen from the 6800-foot level while climbing South Reynolds.

Coron Polley has had a bug up his donkey over the last two years. As a resident of Chelan, Coron has spent most of his life stomping around the Chelan-Sawtooth wilderness; yet he has yet to stand atop the summit of Reynolds Peak, the third highest peak in the wilderness. In June of 2012, Coron and I skied the North Peak of Reynolds which is about 150 vertical feet lower than the South Peak. A cloud cap hung over both summits that day and, as we poked around the base of the South Peak’s rock pyramid in our unwieldy ski boots, we did not feel qualified to handle the third and fourth class terrain before us in a whiteout. We headed over to the non-technical North Peak instead. Coron returned in the fall of 2012 with Chester Marler to grab the South Peak but even with better visibility they didn’t find an obvious, easy line of attack so they grabbed the North Peak yet again.

In May of 2013, Coron was back with Chester to ski the South Peak, but snow conditions were too mushy to safely access the route they thought would lead to the South Peak so, guess what? Yup, they returned to the North Peak. Tom Janisch and I were a day behind Coron and Chester that trip and intersected them as they skied out. With the knowledge they passed on about unconsolidated snows up high, we too gave up on skiing the South Peak and embarked on a circumnavigation of the North Peak that also took us up Rennie Peak.

By now Coron had quite a number of clowns embroiled in his attempt to claim the final 150 vertical feet of the South Peak, and one sunny September Sunday (September 8, 2013) all of us (Coron, Chester, Tom, and I — as well as new witness to this project, Chris Kappler) assembled to give this thing another go.

Yet again we slogged four miles up the Reynolds Creek Trail with all its deadfall and brush. At the 5300-foot level we veered off the trail and battled the steep brush and loose talus leading to the east-facing drainage nestled between the two peaks. At 6800 feet, we scrambled up a steep gully leading to the east ridge of the South Peak. In spring the mushy snow here had thwarted the attempt to access this ridge but, without snow, the gully offered easy scrambling.

Photo: Exiting the east ridge at the 7400-foot level.

On the east ridge, we walked and scrambled up a staircase of beautiful granite shelves decorated with larch trees and heather until, at the 7400-foot level, the scrambling became dangerously exposed and a rope seemed prudent for safe travel. Instead of slowing down the parade by getting technical, a little third-class scrambling led us sideways and downward off the ridge and onto talus-strewn, east-facing slopes headed toward the summit. Here the walking was loose but straightforward until, close to summit, a few hundred vertical feet of scrambling brought us to the culmination of Coron’s elusive quest.

After 99 failed attempts, rays of light split the sky and the voices of angels filled the air as Coron stepped onto the summit at 1:04 p.m.

Coron maintains all of these outings have been worthwhile … and beautiful. He’s seen the area in spring, summer, and fall. He’s waxed philosophic on those days when he hasn’t made the summit saying it’s the journey not the end that matters. And yet when we returned to the car this time, his smile was noticeably bigger, his demeanor noticeably more contented.

Finally there was no monkey on his back, no bug up his donkey.

The North Peak of Reynolds offers an excellent ski ascent in spring and an easy, non-technical climb in summer and fall. The South Peak, meanwhile, is a third-class climb via the route shown on the map (yellow dashes). Both peaks can be accessed from the Reynolds Creek Trails.

The North Summit (8,384 feet) is lower but technically easier to reach. From the 6800 foot level just keep climbing in a westerly direction to the col between the North and South peaks. From the col, head north to the summit.

Equipment. A helmet is recommended for the South Peak. In early season when snow would be encountered on the routes, bring ice axe and crampons. Experienced climbers won’t need a rope.

Hazards. All the normal hazards of mountaineering – avalanches and sliding on snow when the route is snow-covered; falling and rock fall in summer and autumn.

Condition Update. As of September 2013, the trail up Reynolds Creek hasn’t seen a chainsaw crew or a brush crew for a few seasons. The route is passable but brush is encroaching on the trail and there are a moderate number of fallen trees that must be climbed over or walked around. This makes the trail slower to travel.

Leave It Better than You Found It. This should be every user’s goal. Do no damage and pick up trash left by others. Bring a folding pruning saw or some hand clippers and maintain the trail as you hike. 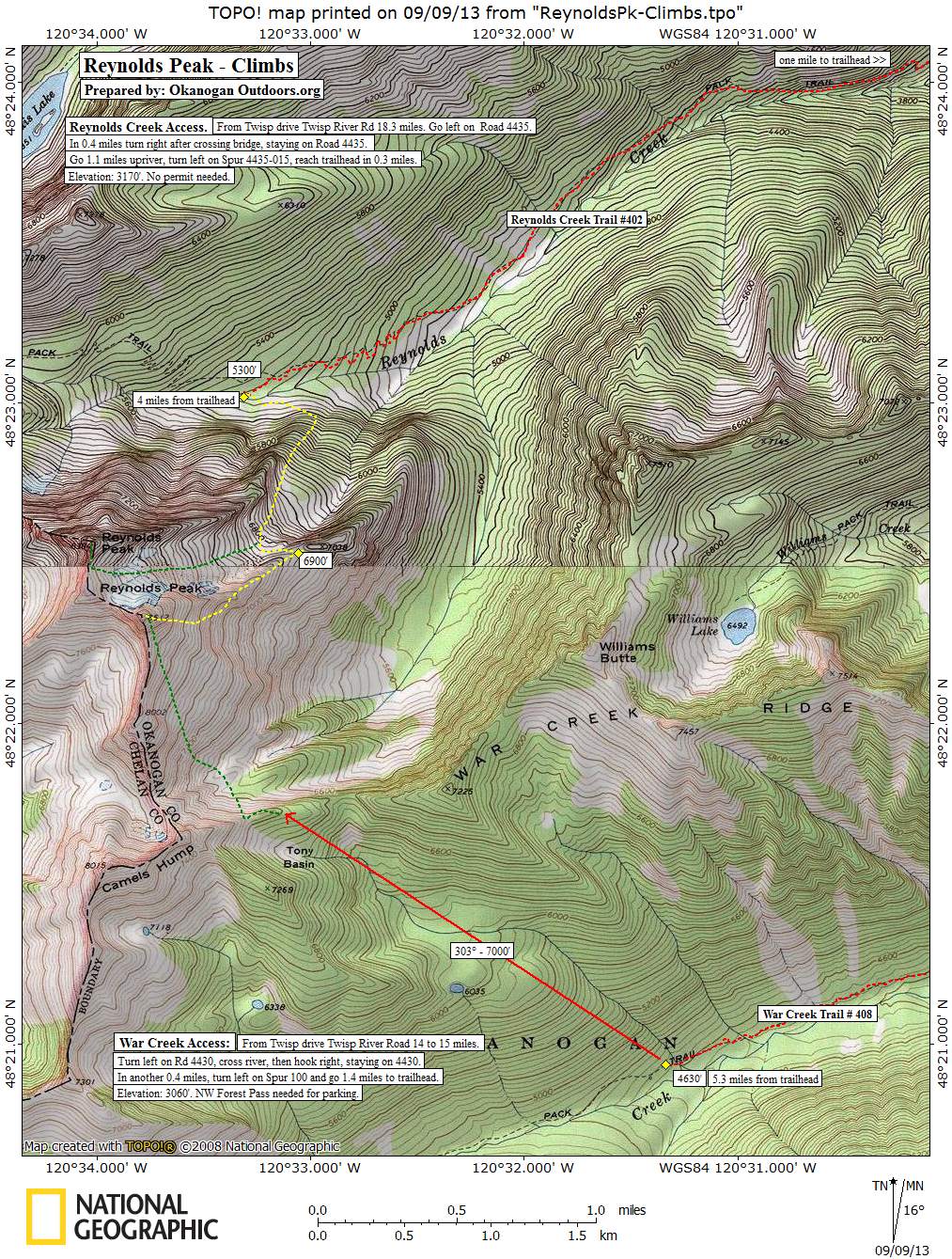