If I had to choose one of the most priceless aspects of solo alpine climbing, it would be that I get to eschew the alpine start and sleep in. I’m getting too old to wake up at 2 a.m. to pound out mile after mile in the dark, wishing all along I was back in bed sawing logs. If I never experience another pre-dawn start time, I would be a happy climber. Mt. Stuart, our Chelan County sovereign authority of perfect alpine granite, is just close enough that my circadian rhythm will not be interrupted if I climb its fabled upper North Ridge in a day from Wenatchee. Doing it solo allows me to get up at a civilized hour, eat an unhurried breakfast of blueberry pancakes with good coffee and catch the morning Sportscenter on ESPN before hitting the road.

I pull into the Esmeralda Basin parking lot at a very lazy hour of 8:30 a.m. It’s a strange contrast to start an alpine climb like the North Ridge of Mt. Stuart at the same time as leisure hikers setting out to Ingalls Lake. But here I am, passing kids, parents and couples as they make their way to the azure waters of Ingalls.

I can pass these other parties because my pack weighs a scant 8 pounds, most of it fluids to keep me hydrated on this warm August day. And therein lies the other benefit of going gearless: A daypack that’s light on the shoulders, knees and ankles. I find that I sweat less and my aging body is happier when the load isn’t bearing down on my joints. I move steadily uphill, the burden’s insignificance allowing me to maintain a fast pace.

Halfway across the Stuart Glacier, I catch up to a couple climbers from Portland. Both are laid out on a small rock island in the middle of the snow and ice, their bloated packs discarded to the side. With a pained look on his face, the older gentleman spies my wimpy rucksack and remarks that he has to learn to pack lighter. The younger climber, nearly comatose, appears too exhausted to speak.

I skip on across the glacier and easily make my way to the North Ridge notch, roughly halfway up the mountain. It’s only been 4 hours since I started out, the quickest I’ve ever made it to this point. With this extra time deposited in the day’s savings account, I kick back on the rock and spend the next half hour doing nothing but looking at the surrounding scenery, which never fails to impress. As far as I can tell, I’m on my own up here today save for the two climbers on the rock island, now far below me.

Photo: Enjoying beautiful views from a regal throne along the North Ridge.

I could spend the rest of the day just sitting here, but the summit beckons. Based on my previous solo, I know I can be lounging on the top in about an hour and a half from the notch. I coax my reluctant feet into the undersized climbing shoes, stretch my overworked quads and calves, and set sail on this gorgeous knife-edge ridge. The route is never hard, and is consistently fun. Whenever a hand or foot hold is needed, one appears. If I don’t like a particular handhold, I merely have to move a few inches to find a better one. This is stress-free climbing at its finest. No wonder it made the 50 Classics list of North America.

Apparently, I’m not the only one who knows this. I catch two other alpinists making their way up the infamous Gendarme, a 200′ tower of vertical rock shooting out of the ridgeline, imposing itself in the climber’s path. This vertical turret is usually climbed in two fun and challenging pitches. I amble up to the belayer and recline in the gendarme’s shade, removing my shoes to give my screaming tarsals a much-needed break. The older gentleman turns out to be Jim Nelson, the author of Washington’s Selected Climbs in the Cascades guidebook series no alpine climber worth his/her salt would go without. Mr. Nelson’s name ranks up there with Fred Beckey’s in terms of his impact on climbing in Washington State. Needless to say, running into him is a very pleasant surprise, and I’m even more delighted, and a bit stunned, when he queries me for ‘Beta’ on climbing the off-width pitch of this gendarme. He says it’s been years since he’s climbed this route.

Jim Nelson and partner at gendarme where the climbing difficulties stiffen.

They graciously allow me to pass them, and I’m self-conscious of all eyes on me as I step off the gendarme’s small ledge, out over the void below. Once past the difficulties, I pause to snap a photo of Jim and his climbing partner, Chris, and continue on towards the top, eager to let my guard down and relax.

Mt. Stuart’s summit is a study in contrasts. Its dry south side flows down towards Ingalls Creek at a consistent, low-angled pitch. Swivel 180 degrees and look down, one sees its north side fall vertically into Mountaineer’s basin. Looking south, I can see I-90 far below. Its a powerful sensation to know what “down there” looks like from “up here”. The vantage is immense in all directions, its vastness a source of both wonder and unease. Though the weather is perfect and the summit silent, I never fully relax: I’m a tiny fly on a giant’s head.

Summit photo and enjoying the land of flowers after escaping the world of rock.

The serpentine trail of Longs Pass stands out — white against the dark scree surrounding it — and from my current perch, looks infinitely far away. Descending Stuart is not a simple matter of hiking down to one’s car. Instead, it’s an endless descent down the Cascadian Couloir, followed by a grueling 1,500′ climb up and out of the valley via Longs Pass, followed by a final descent to the parking lot. It’s a down-up-down that drives most climbers who do Stuart insane. I shoulder my pack and descend, partly jogging, partly walking. With the help of an iPod, the vertical falls away, Longs Pass is overcome, and I’m back at my car by 7:30 p.m., headlamp safely untouched.

Photo: Nearly back to the car with light to spare.

Yet another added benefit of solo climbing becomes readily apparent when I find that the beer in my cooler is still ice cold. The amber ale disappears quickly in my dehydrated state and I marvel at the genius of infusing jalapeno flavor to potato chips. With my beer and chips I toast the death of the alpine start.

I approached from the Esmeralda Trailhead, the common access point to reach Ingalls Lake. The details for reaching the trailhead and Ingalls Lake are all listed here in this entry in the WenatcheeOutdoors online hiking guidebook.

General Route. It’s a four-mile hike to Ingalls Lake. Once there, hike around the south side, scrambling on the Martian-orange rock. Once on the far NE end of the lake, pick up a climber’s trail. This trail will contour down and east towards the ridge leading to Stuart Pass. Cross over this pass, contouring north below the west wall of Stuart towards Goat Pass. Climb up over Goat Pass and proceed to be blown away by the north wall of Stuart.The traverse across the Stuart requires crampons and axe. The entrance gulley to the middle part of the North Ridge is mostly 4th class with a few easy 5th class moves. You may want to rope up.

Photo: The walking route from Ingalls Lake to Goat Pass.


Difficulty. Doing the North Ridge as I did here (approaching the middle part of the ridge) is rated a Grade IV 5.9 if you do the two harder pitches taking you up and over the big gendarme. You can avoid the gendarme by rappelling about 70 feet off the ridge to climber’s right (west). Traverse through a gulley to gain a ledge system leading upward and to easier scrambling. This variation has several pitches that are mid-fifth class in difficulty. Doing the route this way puts the hardest moves in the 5.6 to 5.7 range. Regardless of how you deal with the gendarme, it’s a long route if you rope it all.

Gear. Besides ice axe and crampons most climbers will bring a rope and rock gear. My recommendations would be a single rack of cams and stoppers, with 10 to 12 alpine quickdraws to facilitate simulclimbing. You may want doubles of the 2-and 3-inch cams for the offwidth gendarme pitch. Currently, there is a stuck cam at the crux of this pitch, which takes some of the sting out of the moves. Also bring a headlamp — an awful lot of people end up descending part of the route in the dark.

Descents. The Sherpa Glacier is a good descent option for north-side approaches (e.g., from Stuart Lake), but the Sherpa glacier deteriorates rapidly (usually by July), and becomes very hazardous with its bergschrund, open crevasses, and loose rock. If you’re approaching as I did (from Ingalls Lake) descend via the Cascadian Couloir. See topo map.

Camping. If you don’t do the route in one big push, you’ll probably want to camp in Headlight Basin shortly before Ingalls Lake.

Permits. A Northwest Forest Pass is needed to park at the trailhead. 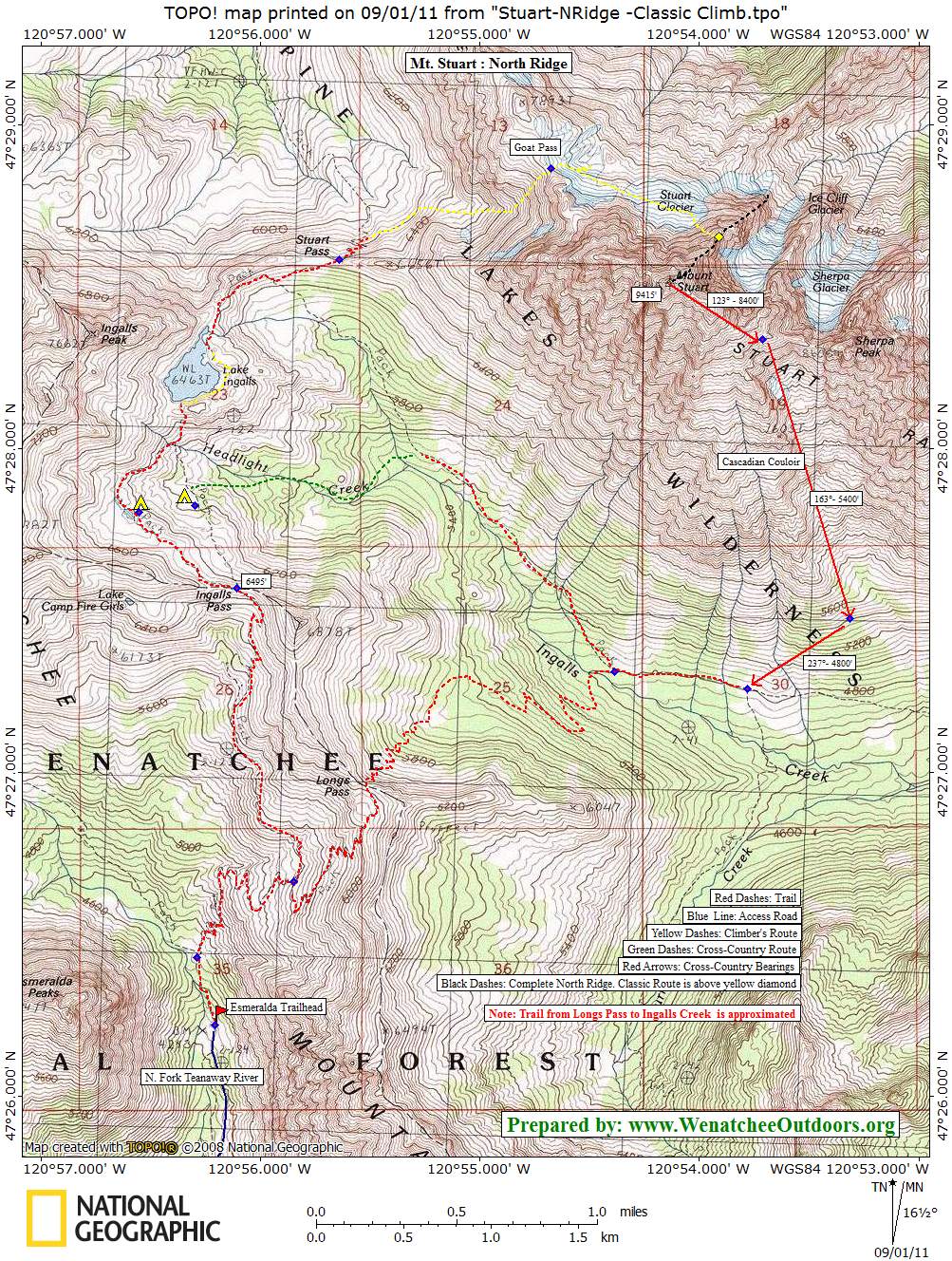