Razorbacks are feral hogs that that were introduced to North and South America in the 16th century. Columbus established the precedent when he intentionally released swine in the West Indies during his second voyage in order to provide future expeditions with a food supply.

Many of us who climb are, admittedly, not the brightest shining bulbs so it’s not surprising some of us got to wondering how the heck wild swine took to inhabiting the Razorback Ridge on the North walls of Mt. Stuart. A few laughed at our naïveté and insisted the name had nothing to do with pigs and everything to do with the sharp edge of the ridge cleaving these walls.

It was an ugly argument with mean things, like name-calling taking place, so on August 8-9, 2009, Adam Vognild and I went out to settle the debate.

We left Wenatchee in early morning darkness and drove to the end of the north fork of the Teanaway Road. In the predawn twilight, the hike to Lake Ingalls glowed as if in phosphorescent light. Then as we traversed from Ingalls Lake to Stuart Pass (the start of the route to Goat Pass) we were greeted by about 18 goats. They viewed us curiously. We wondered about what this might signify: If goats here, why not razorbacks on the far side of the mountain?

Photo: The mysterious north side of Mt. Stuart.

We crossed Goat Pass and after four hours of walking we were traversing the Stuart Glacier on Mount Stuart’s dark north side. The Stuart Glacier is retreating and we worried it may be difficult to access the rock of the lower ridge. Fortunately a snow bridge and a solid belay from Adam allowed access across a foreboding moat. At the base Razorback Ridge, nothing much looked like a distinct ridge and the wild-pig theory was looking credible.

We climbed several pitches of glacier polished slabs to more lichenated rock. There were several steps of fun climbing. As the rock got more solid it also sprouted more black lichen. With the slickness of lichen-covered rock under foot and so much gear over shoulders (we carried ice axes, crampons, ½ gallon on water each, sleeping bags and more because we intended to bivy at the top) we found the technical climbing more strenuous and more frightening than we imagined.

Adam and I swung leads as we moved upward and, fortunately for me, Adam consistently drew the harder pitches. About half way up, the ridge narrowed and I led higher using my hands to grip the sharp, narrow edge of a ridge and my sticky-rubber shoes to smear the granite under foot. Seeing no sign of fauna, we concluded this spot might have been the fabled razorback.

Photo: The Great Gedarme on the North Ridge — we  could see Plotz and Flick moving up it.

Above us on Mount Stuart’s North Ridge we could see Kyle Flick and John Plotz on the Great Gendarme in the midst of their incredible one day climb of the Complete North Ridge. Not long thereafter, we saw above us, near the west ridge notch, Andy Dappen and Bill Dobbins on their ascent of the West Ridge. Everyone in Wenatchee was apparently exploring this mountain today.

As we approached the west ridge notch the wind picked up. We watched Eightmile Mountain and Mount Cashmere get swallowed by clouds. Were we high enough to stay above the mist? In a short time, the answer swirled around and engulfed us.  I told Adam that this was giving a fine alpine accent to the outing. Adam wondered if the earlier exit from the Stuart Glacier over a snow bridge of unknown strength and the climb up steep lichen-covered rock wasn’t alpine enough.

The swirling clouds were spectacular in the evening light. Adam led us up the Direct West Ridge to the summit. Once on the summit, the clouds began to dissipate and we were treated to a burning, red sunset.

A short descent from the summit led us to a sandy ledge shielded from the wind. A snow field was nearby for melting dinner water. This would be our campsite for the night. A blood moon rose out of the east as we sat, cocooned in our sleeping bags. We looked down on the silver skin of the Ice Cliff Glacier far below. We looked across the black silhouette of hills at the shimmering lights of Ellensburg. And we wondered which of the bobbing headlights on the trail to Longs Pass and near Ingalls Lake belonged, respectively, to Kyle and John, Andy and Bill.

Photo: Miller Time, or at least melted-water time, at a bivy near the summit.

The next day we awoke to a glorious sunrise, hiked down Cascadian Couloir, and slogged over Longs Pass back to the car.

As to the debate that still rages over the name of this route, our explorations have brought us to a conclusion of our own. The ridge is often non-distinct and broken up–only in a few places does it narrow down to a sharp edge, so ‘Razorback Ridge’ smacks of a misnomer. Yet there were no feral swine making their livelihoods on the steeply inclined rock walls. So in our minds the name comes from climbing that slippery, lichen-coated rock with overnight packs—that ends up being one wild pig of a day.

Travel Strategy. Use Esmeralda Creek Trail as your access and exit point, especially in late season. In early season, the Stuart Lake \ Mountaineer Creek approach is nice, fast, and convenient for us Eastsiders. But the Sherpa Glacier has to be in shape!  As the summer wears on, there is a large bergschrund on the Sherpa Glacier waiting to gobble up any mistakes, and the jaws of the schrund only widen as the summer progresses. If you approach from the Esmeralda Creek Trailhead, your descent will be down Cascadian, which is straightforward and you can turn the stress-‘o- meter way down. Yes, this descent means you have to climb up and over Longs Pass, but, hey, it’s alpine climbing where suffering is a packaged deal. Plus, you get nice parting shots of Mt. Stuart and the headlamps of those bivying on the summit!

Access. Drive to the Esmeralda Creek Trailhead at the end of the road up the North Fork of the Teanaway River. This is the trailhead used for accessing Lake Ingalls and Longs Pass. You might want to sleep at the trailhead to facilitate an early departure.

Route. Follow trails to Lake Ingalls and Stuart Pass, climb over Goat Pass, traverse down the north side of the mountain and follow the Stuart Glacier to the ridge which is climber’s right (west) of the Stuart Glacier Couloir. Climb the ridge to the West Ridge (5.8). Follow the West Ridge route (5.4) to the summit (the Direct West Ridge followed by this party has a 5.8 pitch). Descend Cascadian Couloir to Ingalls Creek. Hike over Longs Pass back to the car.

*Note this map highlights the North Ridge. Razorback Ridge is west of gully system leading up to the West Ridge notch.

Footwear. Light hikers that you can strap a crampon onto and comfortable rock shoes are recommended for this route. The approach is long and after the climb, you get a 4,000′ descent down Cascadian Couloir, a 1,500’’ climb back to Longs Pass, and another 4-mile drop back to the car. Light is right with the footwear.

Permits. You’ll need a Northwest Forest Pass to park at the trailhead. 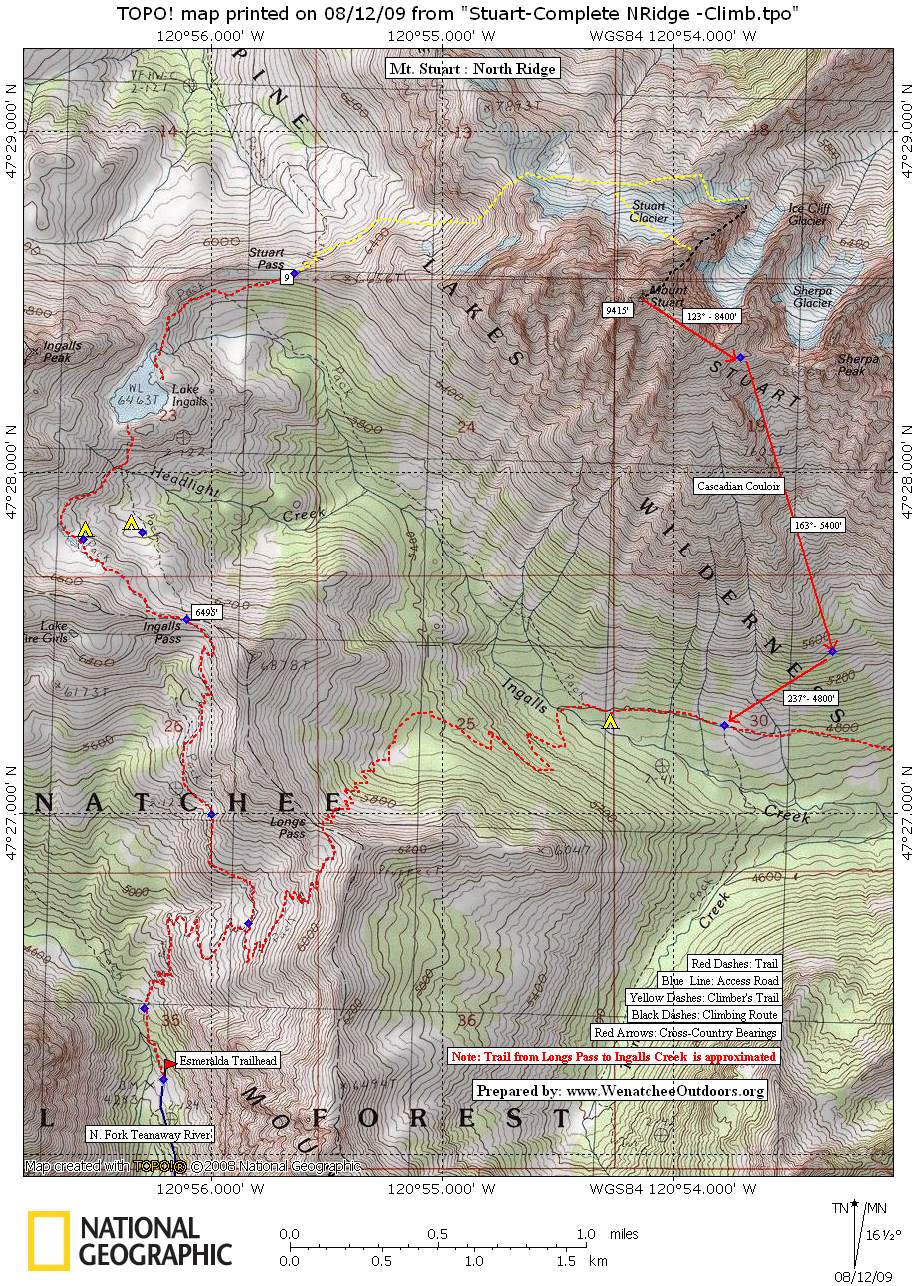