This post is slow in coming because folks like Tom Janisch, Kyle Flick, and Mike Rolfs are big about getting outdoors yet positively useless when it comes to getting stories written down. Darn them! Darn them all to Heck!

So here’s a reconstruction of a little story from one who doesn’t get outside but who does get things written down.

I saw Mike Rolfs at the screening of Pedal Drive – A Bikeumentary held in Wenatchee on the evening of May 13. He told me he was joining Tom Janisch and Kyle Flick the next morning on a day trip to climb Mt. Stuart and ski Ulrich’s Couloir draining the southwest side of the mountain. “You able to join us?”

It was already 9 p.m. and I did the math – 2-plus hours of driving, a few miles of road skiing, about 14 hours of climbing and descending (if you were drafting the motion-Nazi, Tom Janisch), another 2 hours of driving home. Then I consider the weather forecast for the following day – consistent rain in Wenatchee, meaning probable monsoons on the mountain. Thank God, I had a graceful excuse. “I’d absolutely love to do that, but I’m teaching a class tomorrow. What a bummer!”

Whew. What a narrow escape! With Kyle Flick, the summit Nazi along, crummy weather would be an inexcusable reason to turn around. He’d flagellate the others upward and denigrate any pantyhosed girlyman who balked about pushing onward through a downpour. Without the salvation of a class to teach, I would have had to lay blame on a faulty body part like a bum-knee, which I’ve milked to good affect this spring.

Even though I couldn’t join them, I told Mike that, if his survived this session with the mountain SS, to call me on Sunday and report in.

It rained long and hard in Wenatchee the following day and I figured even the sado-masochistic Janisch-Flick duo would give up on the objective. Late Sunday afternoon, however, the phone rang and a deep-throated, disoriented voice said ‘Hello’ on the other end.
“Mike?” It was 4 p.m. and he sounded like a zombie, or like he’d just gotten up, or both. “Did you make it?”

“The weather was terrible here in town. Must have been a horrific up there.” “Lots of clouds and poor viz, but actually it wasn’t bad.” The voice was still emotionless and I wondered if Mike knew he was calling or if he was just stumbling around in a waking dream.

There was no energy for superfluous words. “Met around 3 a.m., were skiing by 5, reached the top around 2, skied right off the top, back to the car at 6.”

I pumped him for a bit more – how was the quality of skiing, the avalanche hazard, the steepness of the couloir? He seemed to wake up as he remembered what was actually a phenomenal day of mountain motion. The snow had been soft, it needed more freeze-thaw cycles to transform from its current creamed-corn consistency to corn snow, and yet it skied well. The top layers of snow presented some slough hazard yet there didn’t seem to be deeper instabilities. And to leave the summit at 2 p.m. and be back to the cars at 6 p.m. – what a crazily cool amount of turning and moving that had been. He was awake, happy, and pretty proud of himself by the time the call was over.

Photo: The routes followed (green was the ascent route, blue the descent route).

Access. From the Big Y Junction east of Leavenworth, follow Highway 97 south over Blewett Pass. About 14 miles beyond Blewett Pass, veer right onto Highway 970 at its junction with Highway 97. Follow Highway 970 roughly 5 miles then turn right on the Teanaway Road. The Teanaway Road is paved for the first 13 miles. At the end of pavement, keep going straight, following the North Fork of the Teanaway along Road 9737. Follow Road 9737 about 9.5 miles until it ends at the Esmeralda Trailhead where the trails to Ingalls Lake and Longs Pass begin. Note: The last several miles of Road 9737 are usually not snow-free until mid to late May. For this ascent on May 14, 2011 the cars were parked about 2.5 miles from trailhead and the skiers surmised it would be a few more weeks  before you could drive all the way to trailhead.  In 2007, the first weekend a normal vehicles could reach the trailhead was the weekend of May 19-20.
Trip Instructions. From the end of the drivable portion of the road, travel the road north to the Esmeralda Trailhead (4,290 feet). Head up the trail bordering the river for about a half mile, then climb in an easterly direction to Longs Pass (6,210 feet). Follow a true bearing of 48 degrees off the pass and head down to the 4,900- to 5,000-foot-level where you’ll cross Ingalls Creek. Find a place to boulder-hop across the creek and then follow a bearing of about 30 degrees up into Ulrich’s Couloir. At the 8,300- to 8,400-foot level, dog leg to the left and climb directly to the summit (9,415 feet).

Hazards. Between avalanches starting in or funneling down the couloir, falling rocks, and falling yourself, there are substantial hazards with both climbing and skiing this route. In firm conditions, falling on the route could easily result in a death slide. To do this route safely, requires good conditions and good judgment. Equipment. Besides the normal backcountry skiing kit, bring an ice axe and crampons as minimum safety tools. Some parties will also carry a thin diameter rope and self-arrest ski poles.

Other. In some conditions falls on this route will result in an uncontrolled slide. So that you’re familiar with the hazards along the way as well as the snow conditions under foot, it’s highly recommend that you climb the route before deciding whether to ski it. Bail down Cascadian Couloir (which also has some very steep skiing at the top) if the conditions aren’t right for you.

Uses Not Allowed. At Longs Pass you enter into the Alpine Lakes Wilderness. Snowmobiles are not allowed past here. Unfortunately, the area is not policed, is remote, and the tracks of snowmobiles are often seen in the wilderness.

Fees / Permits. A Northwest Forest Pass is needed once the road is open to the Esmeralda Trailhead. While snow prohibits access to the trailhead, a permit is not required. 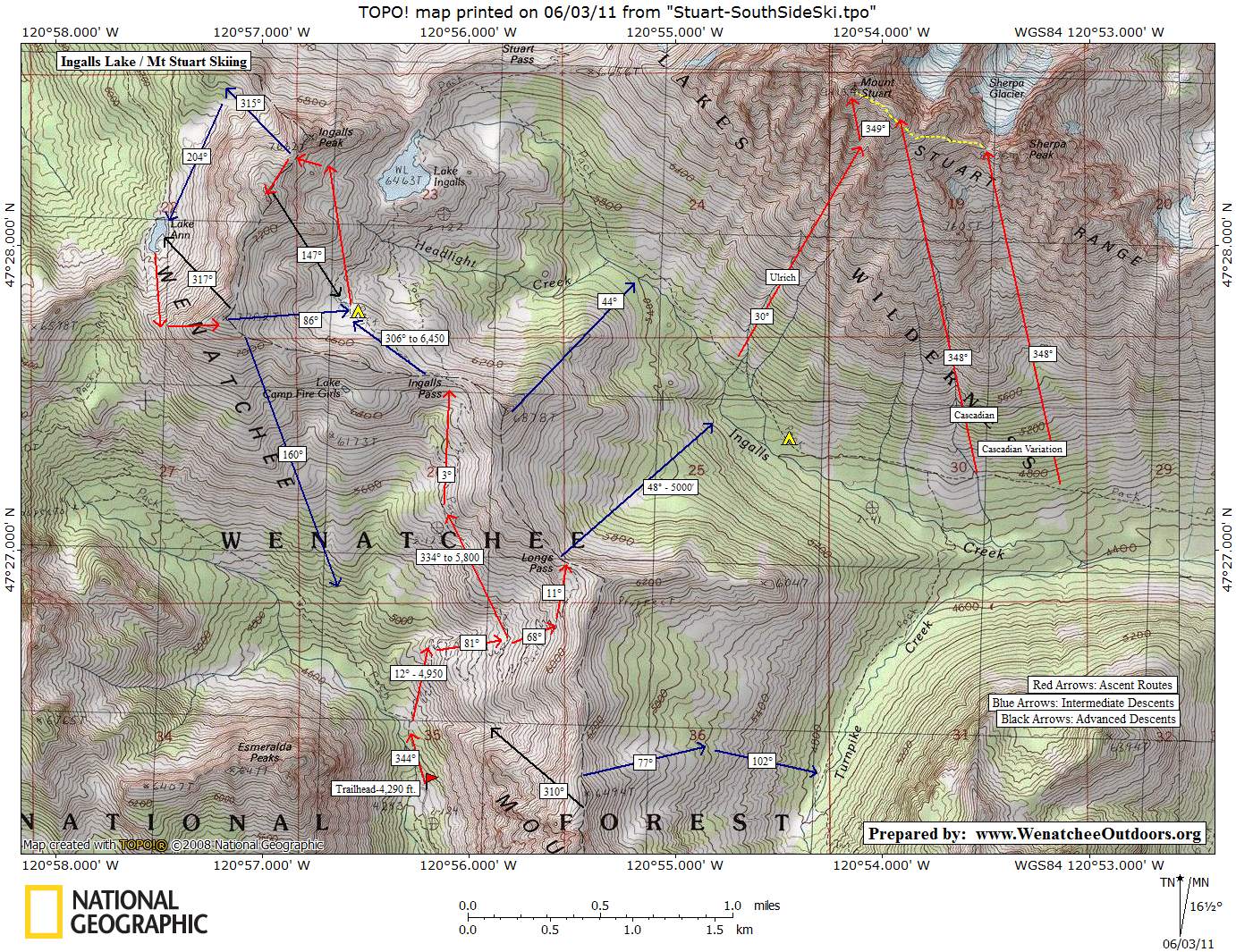