Photo: Souper weather on Super Sunday — it’s all part of the Stupor Tour. Here, Tom Janisch hopes the fog will clear in his mind as well as on top of Big Slide Mtn (aka Big Lou Mountain).


Super Sunday – It’s a national day of overeating and overspectating. Every year the Big Game establishes television-viewing records. And yet not everyone wants to be counted in those numbers. A few cultural oddballs, actually use the day to participate in sports.

This year I circulate a message titled ‘Super Tour or Stupor Tour?’ I attach a map with possible lines we’ll ski, details about the kayak shuttle the trip requires, and a warning that the descent of Cabin Creek is a wildcard that could make or break the day. Several misfits nibble at the bait, but only one bites.

At 6:00 a.m. on Super Bowl Sunday, Tom Janisch and I hide kayaks at the base of Cabin Creek so we can cross the Wenatchee River at day’s end. We also leave a shuttle vehicle behind before driving to the end of the plowed portion of the Icicle River Road west of Leavenworth. By 7:30 we’re shuffling along the snowed-over Icicle Road headed for the Jay Creek area.

“So who’s playing in the Super Bowl,” I ask Tom.

Tom doesn’t disappoint – he doesn’t know. In fact, he’s not sure he’s seen the Super Bowl since Johnny Unitas and Joe Namath faced off in Super Bowl 3. A half mile past the Johnny Creek Campground, we tour up the ridge flanking Jay Creek to the east. The Douglas firs and ponderosa pines are beautifully spaced for skiing, but today the slope’s southern exposure delivers a 4000-vertical-foot diet of breakable crust. We’re thankful we won’t be returning this way. Right: Burns near Icicle Ridge on the ascent. Left: Summit of Big Slide. Our route takes us up Icicle Ridge, under the north face of Jay Peak, and to the 7760-foot summit of Big Slide (aka Big Lou Mountain) — a peak identified from the Icicle River by, surprise, its colossal avalanche slopes. Heavy snow delivers us to the summit 90 minutes behind schedule and forces us to reevaluate how we should access Cabin Creek.

Originally we planned to access the dark heart of Cabin Creek by backtracking a few miles, touring south along Icicle Ridge, and using steep ribs funneling into the drainage. Now we opt to drop directly into Cabin Creek and to trudge over flat ground to reach the break where the creek gets seriously depressed. With a new plan in mind, we enjoy the souper Sunday views of clouds consuming and regurgitating the surrounding peaks.

We capitalize on a short sun break to ski off the north side of Big Slide. The turns are creamy and dreamy. The halfpipe drainage dropping into Cabin Creek is full of obstacles – the tips of trees, boulders for moguls, and spines of rock… It’s a distinctive descent, “Even if Cabin Creek is a hell hole, that run will have made it worthwhile,” Tom comments. A dreamy moment (left) and a ‘Yeehaba’ moment (right). Neither of us believes that claim three hours later. What looked to be three miles of flat ground has felt like six miles as we’ve threaded through the trees neighboring the creek and zigzagged endlessly to avoid the bends of the meandering creek. A little after 6 p.m., we reach the rollover point where the creek drops in earnest. We shed the skins, and let gravity power the heavy work. The usable light bleeds from the sky and we drop the initial steeps by headlight.

It doesn’t take long to discover we have a serious shortage of candlepower for the complexity of the terrain. By 7 p.m. we’re benched out with a 10-foot boulder drop to the right and a 15-foot cliff to the left. Given our middle-aged knees and our modest abilities, we aren’t about to launch off such platforms by torchlight.

When we can see better we expect to find a way around our current predicament. For now, it’s time to make that psychological shift from a welcoming warm bed at home to catnapping around a fire.

We study the map before we get serious about settling in. Several areas deep in the drainage are steeper and more worrisome than the ground stymieing us now. With darkness-enhanced pessimism weighing upon me, I tell Tom that without a rope, we may be ill-prepared for impasses yet to come. My advice: Retrace the seemingly endless rambling that delivered us here.

Retracing the Cabin Creek flats is as appetizing as anchovies on chocolate, but anchovies it is. For the next three hours we work our way back over known ground. Then we plot a shortcut that returns us to the top of Icicle Ridge without an unnecessary swing out toward Big Slide Mountain. It’s 12:30 a.m. Monday when we crest Icicle Ridge. Photo Left: Back on Icicle Ridge after midnight. It’s downhill from here but the game is far from over.

Tom remembers the breakable south-side snows we thought we’d be avoiding, “We may spend more time getting down this sucker than we spent climbing up.”

I’m optimistic about a quicker descent. And I’m wrong. The unholy trinity of bad snow, poor light, and low energy reduces us to the sin of kickturning our way down. We’re not back to the car until 3:30 a.m. and, after retrieving the unused kayaks and shuttle vehicle, not home until 5:30 a.m.

If you wanted to make 24 hours seem endless, today’s trip was a creative exercise in time distortion. It was ordeal we endured more than enjoyed. However, now that the ordeal has passed and I sit in a warm room sipping coffee while I write, Stupor Sunday is becoming better and better with each passing day.

Photo Right: As memory clouds, the beauty and allure of this tour improves. Big Slide Mountain (aka Big Lou Mountain) is the 7,760-foot peak on Icicle Ridge capping Big Slide Creek and situated 2 miles north of the Ida Creek Campground. It is unnamed on the USGS maps and we’re unaware of climbing guides mentioning the peak– the name comes from local usage. Jay Peak (mentioned in the story above) is another local name given to the 7348-foot peak that’s 0.6 miles southeast of Big Slide. Cabin Creek is in the drainage north of these peaks and flows east into the Tumwater Canyon at Jolanda Lake—the little dam-created pond near the candy store that is 4.25 miles west of Leavenworth on U.S. Highway 2.

Tour recommendations. In stable snow conditions, the ascent of Big Slide makes an excellent ski tour. Do it as 1) an out and back or 2) descend the slopes north and east of the summit down into the Cabin Creek and return to Icicle Ridge at the gap southeast of point 6,408 (see map). We still don’t know if Cabin Creek would be a super or stupid exit point, but our money is on the latter.

Other recommendations. The slopes leading from the Icicle Road to Icicle Ridge are south facing so this tour is best done before fresh snow becomes sun affected, or when you can ski south-facing corn down to the road.

Access. From Leavenworth follow Icicle Rd to the end of the plowing (usually just past the turn to the Bridge Creek Campground, 6 miles past Sleeping Lady Resort).

Hazards. There’s potential for substantial avalanche activity along the upper portion of this route. The lower portion of the route can have some hazard in touchy conditions but is generally fairly safe. The bottom part of this route often does hold a lot of snow, so watch for thinly covered rocks and stumps…

Other. Following the ridge bordering Jay Creek up to Icicle Ridge is a quick, efficient good way to get up high for a multi-day tour. See our ‘Skiing-Backcountry’ guidebook for other tours on Icicle Ridge. Specifically see Jay Ridge, Grindstone Mountain, and Icicle Ridge Traverse. 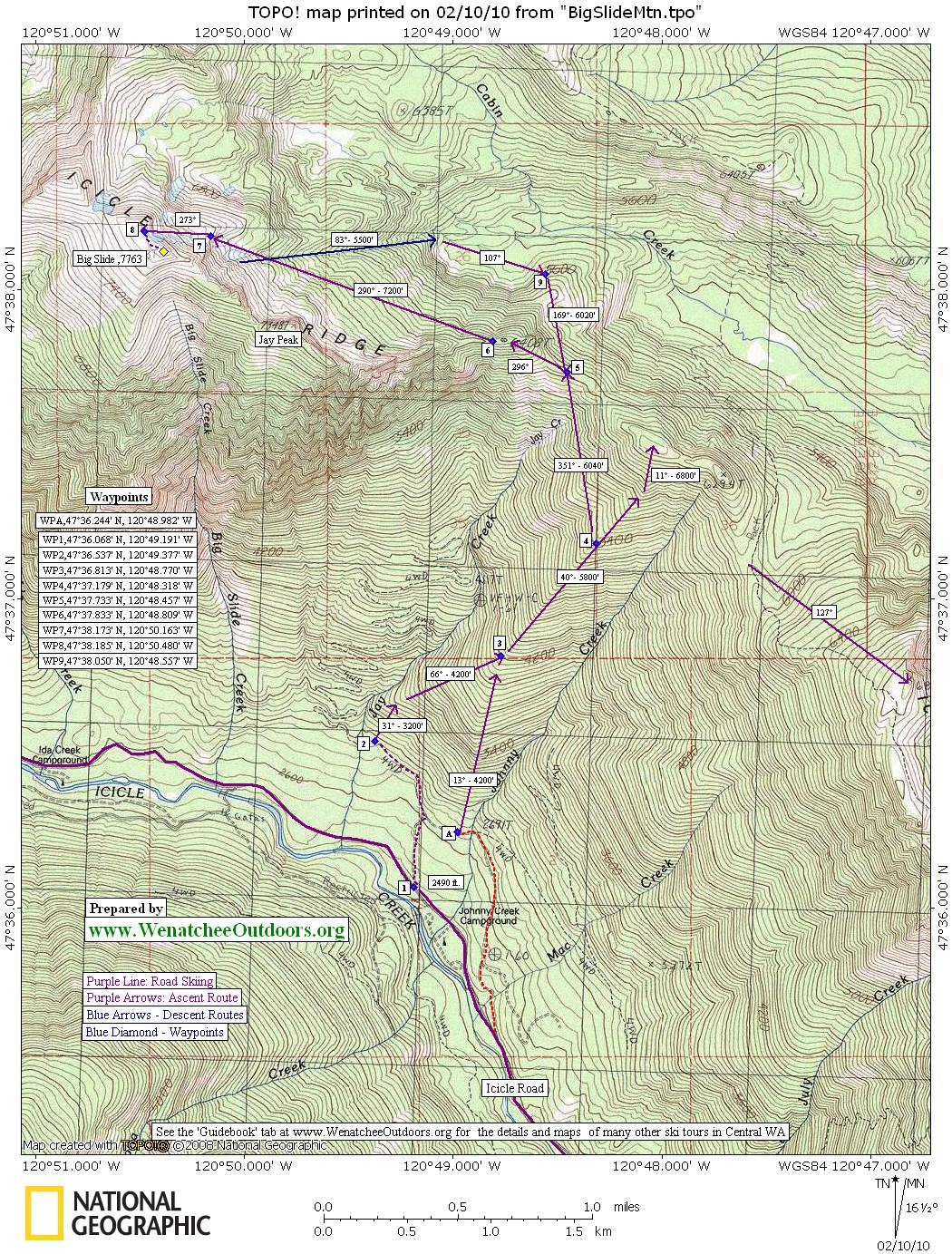