Sheep Mountain Avalanche Avoidance Tour
by Andy DappenOne wintertime beauty of having Highway 97 dissect a big slice of the Eastern Cascades near Blewett Pass is the enormous avalanche flexibility this terrain offers backcountry skiers, snowboarders, and snowshoers. It’s an extremely rare day, even when avalanche hazard is high at Stevens Pass or at Blewett Pass itself, that you can’t find safe peaks to climb and safe terrain to ski somewhere along this corridor. A variety of factors contribute to the area’s enormous avalanche flexibility. First, being some 30 miles east of the Cascade Crest, the hills and peaks flanking the Highway 97 receive far less snow than the crest — Blewett Pass itself typically receives about a third of the total snow Stevens Pass receives. Temperatures here are also considerably colder than along the Cascade Crest so the snow on the East Slopes sticks around longer, even at lower elevations.  Finally the terrain flanking Highway 97 is simply friendly for winter travel – many of the exposures (south, east, and west) are not heavily vegetated and have nicely spaced trees, allowing cross-country travel. Thin forests also result in little deadfall, so not much snow is needed to convert hillsides into ski slopes or snowshoe routes. Finally most of the hills flanking the highway are not particularly rocky so, again, a little snow goes a long way in satisfying the needs of backcountry skiers, snowboarders, or snowshoers.

Put all these factors together and the Highway 97 corridor almost always delivers one of these scenarios:

1) Storms that deliver 12 to 18 inches of snow along the Pacific Crest (and greatly acerbate the avalanche hazard there for a few days) only bring four to six inches of light snow on the highest peaks flanking Highway 97, which results in excellent powder skiing conditions with far less avalanche hazard than at the crest. The avalanche forecast for the day had been ‘considerable’ with the caveat that if anything slid it would go big and probably prove fatal to any life form caught in the fray. In fact, the video of this avalanche set off earlier in the week near Stevens Pass was giving heartburn to many of us who backcountry ski. Our day had delivered plenty of powder turns, but as we turned off our avalanche transceivers I told Tom our choice of elevation and terrain had made the transceivers irrelevant. “Having them beep all day was probably a shameful waste of batteries.” Access. At the Y junction (intersection of highways 2 and 97) several miles east of Leavenworth, drive south on Highway 97 toward Blewett Pass. About 11.75 miles from the Y junction at Milepost 173, turn right into a small plowed area on the right. A sign on the left says King Creek. This is an easy trailhead to miss because the parking area is small and comes just after a curve. If you end up missing it and seeing the signs for Old Blewett Pass, you’ve gone too far (south) up the pass. Waypoint S1:47°24.619′ N, 120°39.478′ W. Elevation: 2,450 feet. Snow conditions. Use our ‘Skiing’ Condition Reports to evaluate the snow and avalanche conditions before you head out.  Also, check the Snow & Ski User Reports to see what others are reporting about the current backcountry conditions (you can find on the homepage). 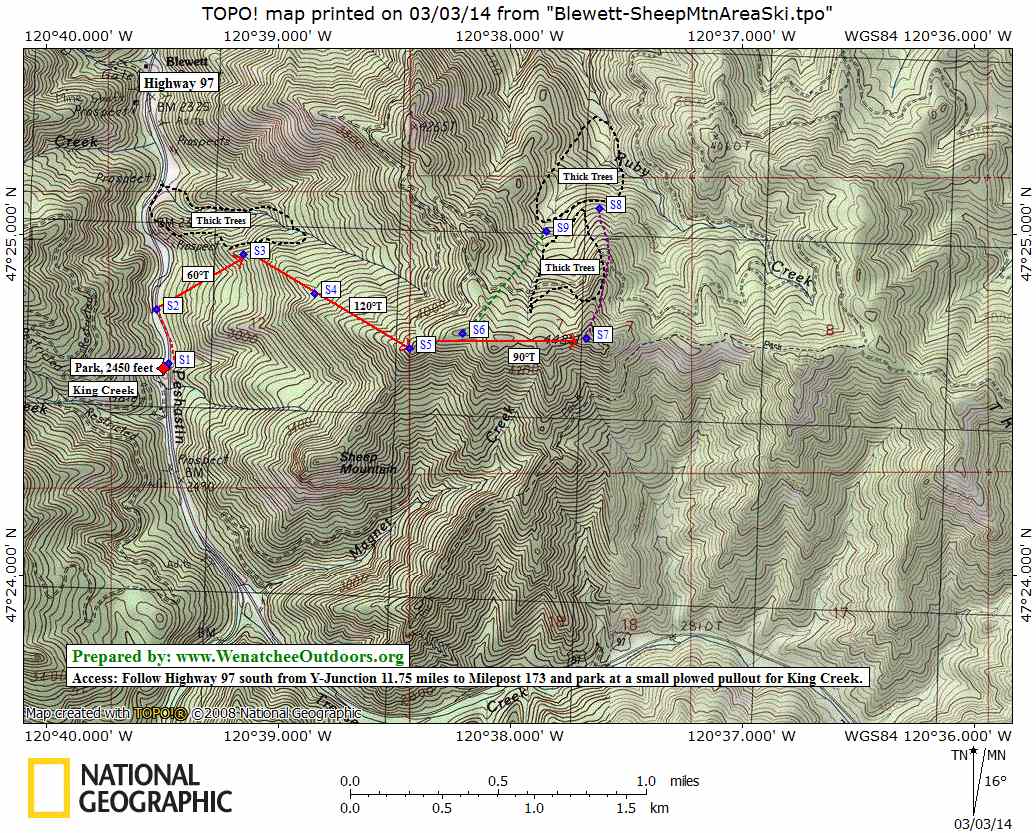