When my family saw the special about Steve Irwin (aka the Crocodile Hunter) in the Galapagos Islands, we all laughed when, just before jumping in the drink to harass some new animal, he looked at the camera and, with his endearing grin, confided, “Ever since I was a child, I’ve dreamt of swimming with the marine iguana.”

The marine iguana? Certainly the now deceased Irwin was stretching the truth a tad for the sake of good TV. And yet viewers could give him slack because everyone of us is occasionally smitten by an odd compulsion. For example, over the past decade every time I’ve stared at the East Ridge of Twin Peaks from Number One Canyon Road, I’ve wanted to hike that sucker. It’s a direct, clean sweep of ground cleaving the entire swell of Twin Peaks into two cheeks like a reverse plumber’s crack. The problem? The ridge starts on private land that is accessed by a private road, marked with unambiguous ‘No Trespassing’ signs. Goodbye dream.

This Thanksgiving the dream rekindled. While studying maps, I noted a cross-country hiker could leave Number Two Canyon Road on public land, ramble over a few ridge systems and access the upper two-thirds of the East Ridge without leaving public land…and without wandering where walkers were unwanted.

In mid-December with the arrival of two inches of fresh snow and the advent of a full moon, I recruited Matt Dahlgreen for a night patrol. The fruits of dream chases are hard to predict and it’s best not to oversell a project, “Could be anything between astonishing and appalling,” I told Matt as we headed into the darkness at 5:30 p.m. with flakes of snow streaking through the beams of our headlamps. the east side of Twin Peaks. In the gut of this valley, we checked the altimeter: We had logged 1,500 vertical feet of climbing but given most of it back. We were not much higher than where we had started 2.5 hour ago.

A few hours of trudging is a slow way to gain 300 vertical feet, but it’s a quick journey for reaching a heart of darkness—which is where we found ourselves. Although only four air miles from downtown Wenatchee, if you dropped dead in this sun-shielded valley and no one knew your travel plan, you’d lie here undiscovered for 40 years.

Photo Above: The One-Two Divide as seen from near the summit of Twin Peaks.

Another paradox: In the bowels of this desert drainage, gurgling water nourished jungle-thick vegetation. Bashing through 50 yards of brambles delivered a better full-body workout than an hour of uphill climbing. On the far side of thicket we zigzagged upward again, following the line of least resistance toward the real prize–the elegant East Ridge. Snow spilled from the sky in earnest dumping an inch of powder in 20 minutes. As we arrived on the ridge, however, the gray gauze obscuring the moon unwrapped and we all but needed sunscreen to shield faces from the brilliance bouncing off the moon’s mirror.

Stopping to absorb such majesty was mandatory. The tangerine lights of Wenatchee warped in the heavy winter air below us, silver slopes peeled off precipitously to our left and right, and the glowing staircase of ridge arched skyward. It was the dreamscape of the awake — a place where peyote and sobriety merged.

The cold penetrated clothing quickly and we returned from the wonder of gawking to the work of climbing through air saturated with Freon. Ski poles sucked warmth from gloved fingers and we walked faster as our defense against the bite of frost.

Clouds continued draining from the sky and the moon grew so bright that the two of us and a pair of moonshadows walked as a foursome up this unworldly spine. On the summit, with hoods pulled over heads as armor against a nipping wind, we spun slow circles absorbing the lights of town below and the torch of moon overhead. We took in the black snaking body of the Columbia and the ripsaw silhouette of the Cascades.

“Mind-blowing.” Matt muttered as he twirled. “Dream-making,” I rebutted. “Ever since I was middle-aged, I’ve dreamt of hiking this ridge in winter moonlight.”

Difficulty: 3 (advanced).
Fitness Level: 3 (advanced).
Distance:  10 miles round trip, 8 miles if you leave a car or bike at the end of pavement on the upper end of Number Two Canyon Road.
Elevation Gain: 4,500 vertical feet.

Recommended Season: Spring and fall. In winter, the trip can also be done as a combination hike-snowshoe outing.

Access:  Zero out the odometer at the intersection of Skyline Drive and Number Two Canyon Road (elevation here is 1,005’). Drive past the gun club entrance and about a half mile farther, just past a small rock tower near the right side of the road (odometer reading of 1.95 mile), park on the left (south) side of the road in a small pull off with a shot-up ‘No Dumping’ sign. Up the road about 75 yards on the right side is a small drainage/canyon you’ll be ascending.

Note: use ‘Print Preview’ before printing to properly scale this map to a full sheet of paper.

Hazards. Rattlesnakes: In warm weather bring ski poles and, in bushy places, use them to beat the brush in front of you (leave the snakes alone if you encounter any). The approach to the East Ridge follows no established trail—you’ll find segments of game trails to follow but usually you’re on your own. Some of the slopes you’ll descend during this approach are very steep and the footing is tricky–the walking is more akin to a mountaineering approach than a hike. Finally, if you’re doing the route in winter and the slopes are loaded with snow, avalanches are possible.

What to bring. Carry plenty of water in warm weather. Recommended gear—the normal essentials plus supportive boots, trekking/ski poles, map and compass. An altimeter, while not essential, helps the route-finding. When we did the route with a little snow on the ground, bringing the micro crampons made by Kahtoola were great addition for the cross-country travel where snow and frozen ground made the conditions much slicker

Issues:
1) Slobs have trashed the side of the road and the brush at the start of this hike. Bring a trash bag and at the start of the hike, collect a bag’s worth of litter. Make yourself visible along the shoulder of the road so passing cars get the message.
2) People also sometimes use the base of this canyon as a poor man’s shooting range. You may want to steer clear if people are shooting when you arrive. 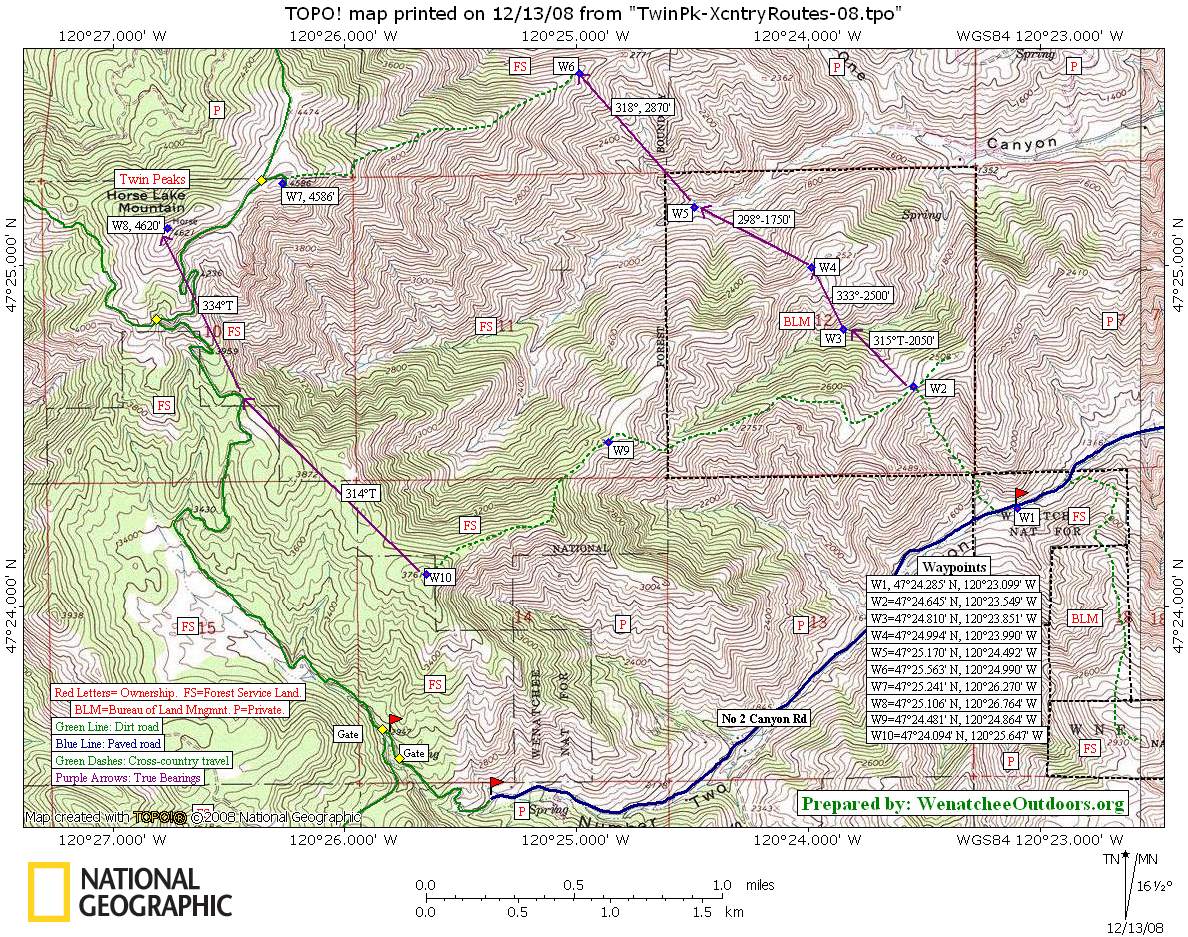