Throughout Washington State, backcountry skiers know that the mountains flanking the North Cascades Scenic Highway (Highway 20) near Rainy and  Washington passes provide some of the country’s premier ski touring. The massive avalanches that overrun the road in winter and the absence of large population centers east of the mountains shut down the highway throughout the winter months. In spring (sometime between early-April and late-May depending on the winter snowpack), the highway is plowed and immediately ‘they’ come. Mainly ‘they’ come from within the state and ‘they’ come on weekends. They may come for short day tours (Blue Peak or Spire Col) or for medium-length loops (The Birthday Tour) or for long day climb (Black Peak) or for multiday traverses (the Isolation and Ragged Ridge traverses), but they come. Gradually, the word has gotten out that the abundant and easy access to snow, wild scenery, freeze-thaw corn conditions, and long spring-summer season make Rainy and Washington Pass must-ski destinations. So now ‘they’ includes a few from far corners of the country.

Recently I skied the Rainy Pass area with Bill Birchard, 58, of New Hampshire who has ski toured a number of times in the Alps and who owns a second home in Golden, BC so he can tour Rogers Pass and the Canadian Rockies. He was accompanied by his son Jake, 25, who lives in Colorado Springs where he can ski, climb, and kayak year-round.

Naturally I wanted to know from well-traveled skiers how our North Cascadian stomping grounds stacked up. The North Cascades receive their share of avalanches. This slide took the ‘primeval’ out of this stand of trees.

The short answer: Pretty darn well. The total relief fell short of the Alps and the Selkirks, but the total experience did not.

Bill told me, “These peaks rival the ruggedness and beauty of BC, they remind me of skiing Rogers Pass. And I love skiing through the old-growth forests and among the massive trees as you climb into the Alpine zone. This is America at its primeval best and way better than the Alps.” Meanwhile Jake had flown in from Colorado where he had bailed on several of his most recent ski objectives due to deep, dangerous mush that would not set up (even at the 14,000-foot level) in the late-spring temperatures of the Rockies. “It’s nice to have a spring snowpack that freezes at night and provides a predicable slide hazard. And to ski right from the highway, in June, rather than packing the ski gear miles up a trail – that’s just pure pleasure.”

I’m already enamored with this country, but hearing such praise makes me all the happier to stay home and explore the regional backyard.

Skill: 2 (intermediate) to 3 (advanced) depending on the objective chosen

Fitness: 2 (intermediate) to 3 (advanced) depending on the objective chosen

Access. From Winthrop, drive State Highway 20 about 36 miles west to Rainy Pass (Milepost 157.5) and  park in one of the pullouts on either side of the highway. A Northwest Forest Pass is required during hiking season when the parking areas are snow-free but not in late spring and early summer when the parking areas are snow-covered. A secondary, more direct pullout for parking when skiing up Porcupine Creek is 0.75 miles west of Rainy Pass (milepost 156.75) on the south side of the highway. This pullout is a little lower than Rainy Pass but provides an easier approach if the Pacific Crest Trail is still snow covered.

Map: See our topo map of the area.

GPS: Download a GPX File (CutthroatPassSkiing.gpx) with waypoints listed on our map. A camp just below Cutthroat Pass. Below: This is country that makes all food taste good. 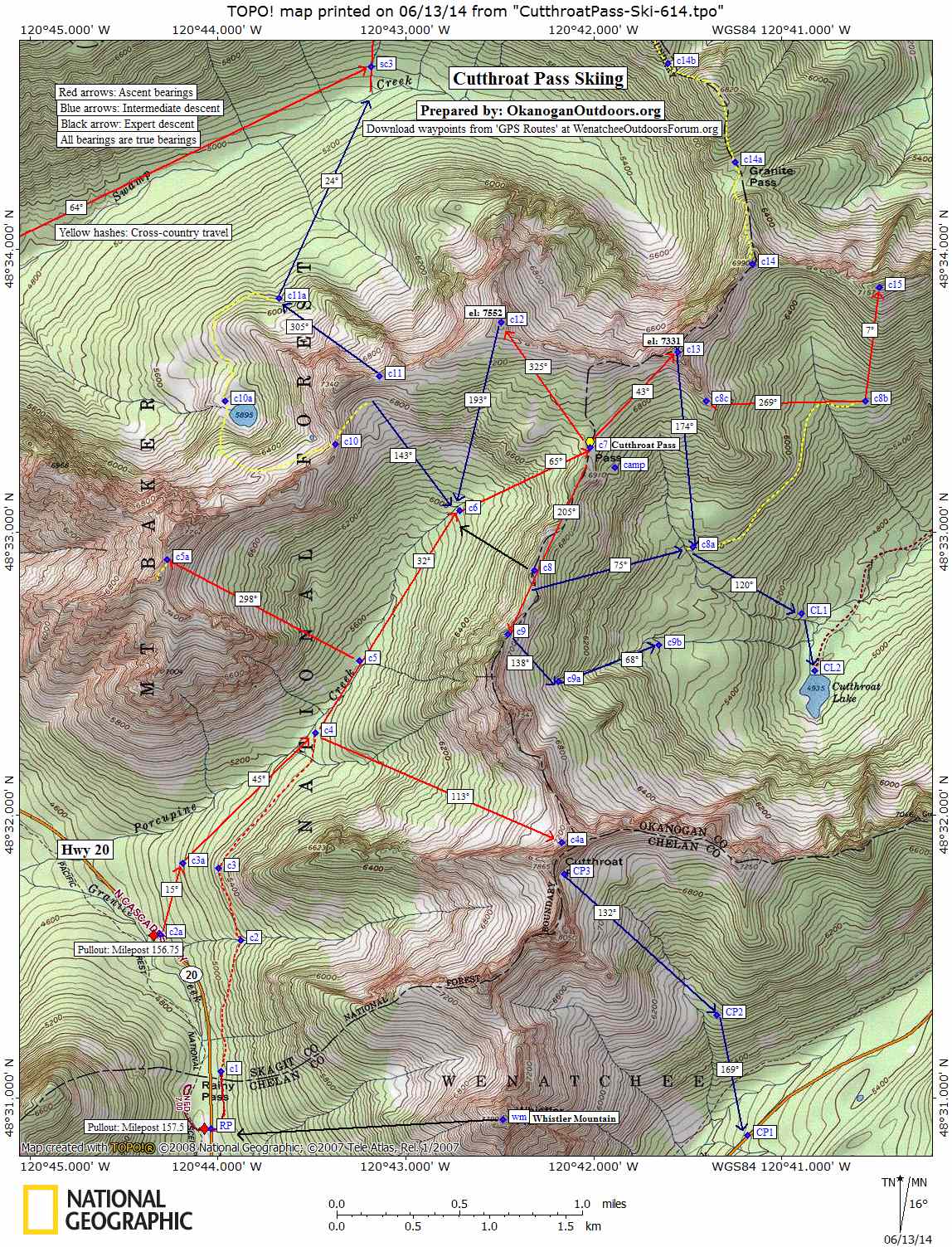