Mt. Stuart from near the summit of Hawkin’s Thimble.
Words and photos by Roger Gervin.

You can view additional photos, beta, and a GPS track on his website Starting from the north end of the DeRoux Campground (~3800′), we used a combination of the Boulder DeRoux Trail, 4WD Road 301 and 4WD Road 304 to reach the basin (~6200′) on the south side of Hawkins Mountain… where we could look up and see three very distinct rock outcroppings located near the east end of the mountain… however, since all three rock outcroppings were on the same contour line of our map, we weren’t sure which one was the Thimble.

Armed with a bit of uncertainty, we headed up in the general direction of all three outcroppings… at first on loose scree… then onto a solid boulder field (where it became clear that the outcropping on the left (west) was our target)… then back on loose scree as we worked our way up to a notch on the east side of the Thimble… where we changed to rock climbing shoes for the final 60 feet of elevation gain to the summit (7080′).

Prior to starting this adventure we reviewed b00’s TR on this forum and Klenke’s TR on Summit Post where both reports mentioned some Class 4 climbing being necessary to reach the summit and get back down safely.  Klenke called it Class 3 on the way up and said this about a couple of moves on the way down… “I rated it Class 4 just because I couldn’t get my body positioned right. Plus, the holds aren’t right there for you.”

I don’t know about you, but when I hear the term “Class 4”, I get kind of fidgety… so I packed an 80 foot panic rope and four slings just in case they might be useful.
Klenke said “from the notch simply work up to the obvious break left of the overhang”… and while the break was obvious, it looked like there were two options to reach it… either (1) follow a narrow ramp in the direction of a small tree and then climb along the break back toward the overhang, or (2) take a more direct approach, bypassing the ramp altogether and more or less going straight up toward the break. Some of the final moves to Hawkin’s Thimble.

Rocman studied the first option for some time before deciding that the second option offered less exposure… and up he went, taking the panic rope and slings with him to the summit… where he secured the rope and tossed the other end down to me near the notch… and while I didn’t feel the rope was necessary on my way up, Rocman had me tie overhand knots every two or three feet along the rope… creating loops in the rope that could be used as emergency hand holds… and sure enough, one of those overhand knots came in very handy on the way down… where I spent what felt like 10 minutes trying to get my body positioned correctly to make the only Class 4 move on our route down.

After I was back at the notch, Rocman pulled the rope back to the summit… removed the overhand knots… repositioned the rope where it could be threaded through a sling and still be long enough to accompany him below the Class 4 move… where he retrieved the rope and joined me at the notch.

After exhaling at the notch, we headed down through the loose scree and boulder field… opting to take a more direct route back to Road 304… as we started a downward traverse (~6400′) underneath the south side of the Thimble that eventually crossed some more loose scree before reaching the road… and while the jury is still out on whether or not this shortcut saved us any time, it probably saved a half-mile of hiking.

Once we were back on Road 304 the last 4.5 miles to the trailhead was a breeze.

Best Seasons. As soon as the snow melts out, around June, through October. Earlier in the season, the route may warrant an ice axe and crampons. The general route up Hawkin’s Thimble from the basin to the south.

Trip Instructions. The route described here begins from the north end of the campground, and initially follows the Boulder-DeRoux Trail paralleling DeRoux Creek. Reach a junction with the DeRoux spur trail at 1.5 miles, and follow signs to Gallagher Head Lake. Cross DeRoux Creek at 3 miles. At 4 miles, reach the Gallagher Head Lake junction, continuing on the Boulder-DeRoux trail. At the next junction (with a broken sign as of July 2015) turn right and walk Road 301 a short distance before turning left on Road 304. Once the road ends, you reach a basin south of Hawkins Mountain. Leave the trail and scramble upward north through talus, aiming for the notch just east of the westernmost tower – Hawkin’s Thimble. Some steep scrambling or snow in early season gains the notch. From here, a couple routes are possible to gain the summit, all exposed, all class 4.

Roger Gervin reported a rope and rock shoes were helpful for extra security, but that depends on one’s comfort level. The general beta is “from the notch simply work up to the obvious break left of the overhang”. Study Gervin’s TR and others that he linked to for additional beta. Once on the summit, descend and return the way you came.

Fees/Permits. A Northwest Forest Pass is needed for parking at the trailhead. 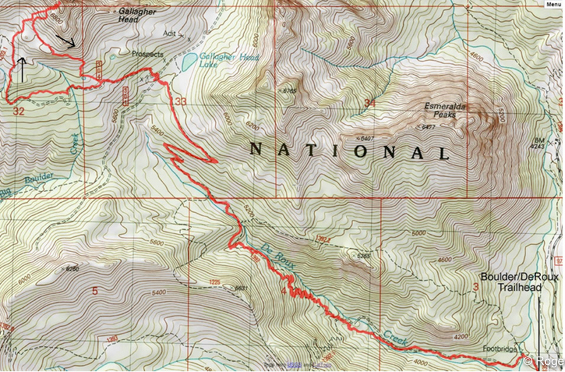