A week ago, with the vernal equinox bearing down upon us, Tom Janisch and I searched for an appropriate destination to celebrate the day. Where better to sample some heat, we decided, than to ski Cannon Mountain via Hel Basin.

March 21 arrives and shortly after dawn we’re walking through the shadow of spring. Unlike two weeks ago, we now need to walk rather than ski the first two miles of the Eightmile Road leading to the Stuart Lake Trailhead.

Four miles up the road and another mile up the Stuart Lake Trail, we strike off cross-country and skin upward through mushy snow. Soon the slopes leading to Hel Basin greet us with their  jumble of truck-sized boulders and boulder-sized avalanche debris. We wander upward through all this detritus and soon reach Hells Gate, a bulge of blue ice that, once scrambled, provides the easiest entrance to the basin. Temporarily, skis and poles are replaced by crampons and ice axes and, half an hour later, we enter Hel.

Contrary to Dante’s Inferno, our piece of Hel is sacred with orange-tinged larch trees, salt and pepper granite boulders, charcoal spires, Photo Shopped blue skies, and white-barked pines…which are green.  It’s all so Sierra like, but more compact…more neck crimping. Which means, of course, that it must be the Cascades.

We climb through spring, enjoying the sun as it occasionally vaporizes holes in the clouds and rains heat and skin cancer over us. At the 7,300-foot level, however, we approach a curious portal. Over the course of several steps, we move from spring on protected slopes to winter on a wind-buffeted ridge. We slip on windshells and attack the remaining 1,300 vertical feet of the climb, confident it will succumb to our awesomeness.

Groveling in sugar snow several hundred vertical feet and several hours away from the summit.

The first third of the ridge bows before us. The second third seriously shifts the flow of respect. There’s no longer enough snow to ski upward yet the patches of white between all the rock outcrops are thigh-deep pools of sugar snow that mire us.

The final third of the ridge is being whipped with even stronger winds that are super cooling anything warm. Hel is freezing over. So are my fingers, lips, ears, and eyes. My desire to reach the top has already frozen.

“What happened to spring?” Tom asks.

“Let’s go look for it down lower.”

Tom has no objections. We downclimb and then ski to the 7,300-foot portal dividing the seasons. We linger here: Should we sample spring corn on the south-facing slopes we climbed? Or should we drop over the opposite side of the ridge and look for powder, the fruit of winter, on the north-facing avalanche paths?

This litmus tests reveals that we’re really not creatures of springtime. We violate the mission that brought us here and go hunting for powder. And we find nearly two thousand vertical feet of it.

Over the course of two hours, we drop from avalanche paths to forests, forests to trails, and trails to roads. As we drop, not even aspect can hold back the tide of the seasons. The snow morphs from powder to some substrate resembling a used Pamper. And then, strangely, it just disappears. Poof. Gone. And we’re walking the last two miles of road leading back to the car.

On the ascent the difference between dirt and snow hardly mattered. On the descent, however, the road would be such an easy glide. And walking this sucker is such tedium…such Hell. Winter may have bested us up on Cannon’s summit ridge, but here and now I’m wishing Hell would freeze over again.

Access and Route. From the Bridge Creek Campground on the Icicle River ( 8 miles up the Icicle River Road near Leavenworth), ski/walk the Eightmile Road to the Stuart Lake Trailhead (4 miles). Follow the Stuart Lake Trail about 1.3 miles. Shortly before a log footbridge crosses Mountaineer Creek, climb cross-country in a southeasterly direction up into Hel Basin. The crux of the approach lies between 5,300 and 5,600 feet where you’re likely to want crampons and an ice axe to climb a bulge of blue ice and steep snow slopes leading to the basin. At about 6,000 feet, make the choice of which slopes up the mountain you want to climb. Our map shows two of many possibilities.

Descent options. Retrace the climb. Or, at the 7300-foot level of the northwest ridge, drop onto north facing slopes and follow the route shown on our map. This north-facing descent has more avalanche exposure but also provides more direct skiing and avoids down climbing the ice bulge described above.

Hazards. The ascent and descent options described above expose you to a lot of avalanche terrain on different aspects of Cannon Mountain. This is route best saved for times when you know the general avalanche hazard to be low.

This article was originally published on 3/23/10. 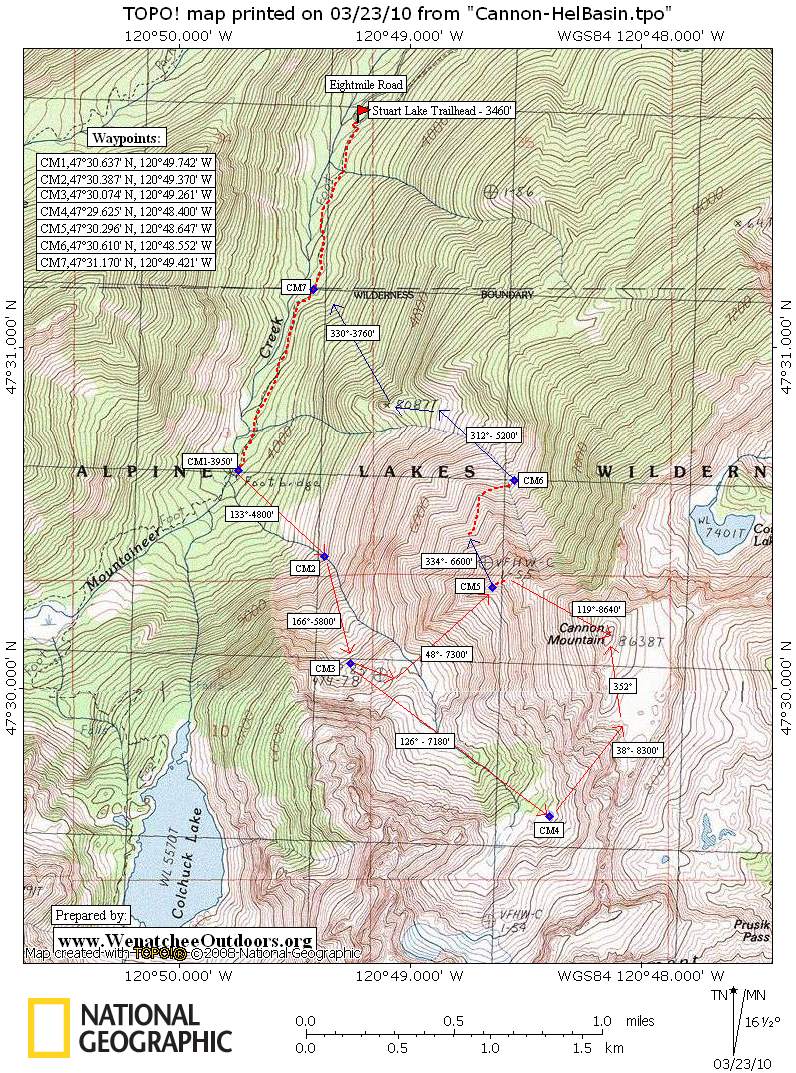