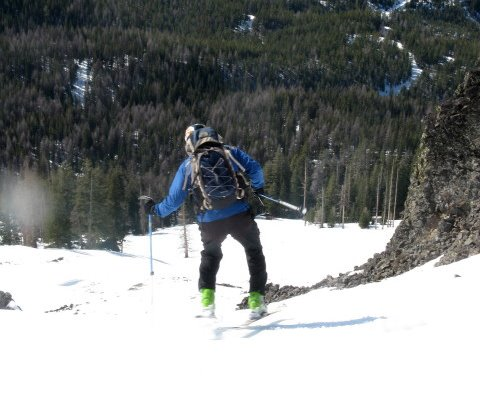 Rob Mullins test driving the Superlights down corn fields on the west faces of Diamond Head.

The Dynafit Seven Summits Superlight ski recently replaced my standard Seven Summits ski, which had three seasons of use. The Superlight is now my choice for spring tours where I might find hard snow, corn, mush or even some fresh snow. The Superlight not only handles hard snow particularly well, it handles all those other spring possibilities reasonably well. An 80mm-waisted ski like this combined with a light boot is my preference as an all-around spring ski. In hard-snow conditions, narrower skis are better for sidehilling while skinning and for edging while descending. Light is right on the tour, and this gear is very light.

Seattle-area based Swiss Guide, Martin Volken, recently commented on this site about the advantages of narrower skis (waists less than 90mm) for ski touring (see post. I agree. If I had to have aone-ski quiver for both winter and spring touring, I’d get an 88mm waisted ski like the Dynafit Mustaga Ata, K2 Mt. Baker Superlight, or the new K2 Wayback. Since I have a quiver, however, the 80mm-waisted Seven Summits Superlight fit a nice niche: It carves hard snow well but is also wide enough for all-around conditions.

When using the Zzero3C boot on the Seven Summits Superlight, I found the equipment was a good match, well-balanced, and stable. When using the Zzero4C boot on the Superlight, I found greater control and stability, but I was also able to reach a ‘speed limit’ when the ski would chatter instead of carve smoothly. For the majority of people who ski the backcountry at speeds less than stupid-fast, the Superlight will ski fast enough.

This ski is also quick turning in chutes but is not as easy to initiate as the K2 Shuksan, another ski I’ve used and that my wife tours on. However, for heavier skiers like me (100+ kg) or skiers wanting high performance on hard snow, the Seven Summits and the Seven Summits Superlight are both excellent choices.

With the Superlight I have reduced my randonnee quiver down to two pairs of skis (the Seven Summit Superlights and the Dynafit Manaslus) and one pair of boots (Zzero3C).

Bindings
The binding that I chose for the Seven Summits Superlight is the Dynafit ST Pro ($470 with ski brakes). This binding can handle big skiers making high-speed carves on hard snow, forcing tight turns in chutes, or taking small airs. The binding functions at least as well as my FT 12 binding and better than my Comfort and Speed bindings. I do walk out of ST Pro occasionally while skinning, but I seem to do this with most bindings, including Fritsches. The brakes of the ST Pro have worked perfectly so far and are a big improvement over the brakes made for some of the older Dynafit bindings. The ski crampons for the binding are easy to use and work well.

Regarding skins, Dynafit’s Speedskins (synthetic mohair) are the best I’ve found. They’re light and seem to slide better. I’ve used these skins for two seasons with almost no apparent wear and with no glue problems. The attachment system is simple and functions well.

Rob Mullins lives in Leavenworth and ski tours about 80 days a year.