Charlie Hickenbottom on the south side of Argonaut Peak.

Three old men became what may be the oldest group to summit Argonaut Peak in recent years. Ranging in age from 58 to 69, Roger Gervin, Rod Yates, and I were ‘brothers in arms’ as coined from Roger’s admiration for the work of musician Mark Knoffler.

Based on my knowledge of study, guidebook reading, and having climbed most of the surrounding peaks, Argonaut defends its summit best among the Stuart Range. Over 4,200 vertical feet of elevation gain must be reckoned with on Argonaut’s south side as one climbs out of Ingalls Creek. About half of that gain is untracked forest and brush with no defined trail. Sherpa Peak may be harder in respect to the technical difficulty to the top via its easiest route, but a well trod climber’s trail to timberline takes the sting out of accessing that peak.

Argonaut Peak also rates as an oddity in that its easiest route is not quite a roped rock climb, but the large amount of class 3 and class 4 scrambling put it at the highest level of what could be fairly termed ‘scrambling’.  Numerous reports on the Internet from Summit Post and Northwest Hiker describe the south side route as a scramble, but a fair number of climber’s carry a rope and many use that rope in one or more places.

As a veteran rock climber, I caution that the part of the climb which approaches the east ridge via a chockstone-blocked gully is probably only called class 4 because many who arrive come without a rope.  I would place one move as low fifth class and anyone not highly experienced in scrambling would be scared to death by the exposure and commitment required to move past the chockstone without a belay.

We chose to access via Beverly Creek in the Teanaway, hiking over Fourth Creek Pass and descending Fourth Creek to a camp near the junction with the Ingalls Creek Trail.  This route is the shortest of various access options to a basecamp in the Ingalls Creek Valley, but requires a ford of Ingalls Creek.  Tevas and calf-deep water were a combination that made the crossing easy in early August, but earlier in the summer this would be a formidable crossing.  This approach also allows peak baggers a convenient shot at Bill’s Peak from the Fourth Creek Pass on either the approach or exit day.  Of course, an option chosen by some is to travel light and do the peak in a single day.

We enjoyed the luxury and camaraderie of hiking in during an afternoon (5.5 miles total, ascend 1800 feet, descend 1400 feet), climbing the peak on the second day (12 hours round trip from basecamp for us), and hiking out the morning of the third day.

A few years ago, Roger began climbing the “Backcourt 100” in earnest.  This is a list of peaks to the east of the crest of the Cascades, north of the Snoqualmie Pass highway and south of the Stevens Pass highway.  Nearly all of the peaks fall easily in the scrambling range, but a few have a higher degree of technical difficulty. Many of the peaks are in the Teanaway and Cle Elum drainages, which I have also frequented through the years.  When Roger was up to completing perhaps 45 of them or so, I decided to review my climbing resume and see how many I had done.  Turned out that we were both close together on our overall totals, but Roger liked my list better.  He had done more peaks in the lower half of the list and I had done more peaks in the upper half of the list.  Our friendship goes back to college days and I suggested that my climbing background could provide him with some support to do some of the more technical, exposed climbs.  With this in mind, we’ve done The Cradle, North Ingalls Peak, Mount Stuart, and now Argonaut together.  Through Roger’s interest in the “Backcourt”, I’ve added a field into my database of climbs so that I can more easily keep track of which ones that I’ve also done.

Roger documents his adventures via the internet and assembles his pictures on his own website.  Rod provides the GPS statistics and also supports Roger’s chronicles with some of his pictures when they scramble together.  Together ‘ragman’ and ‘rodman’ often post on Northwest Hiker.  Use this link to read Roger’s account of the climb, see his pictures, or follow his links to more information about Argonaut. (Note: Charlie’s handle as given by Roger is ‘rocman’ 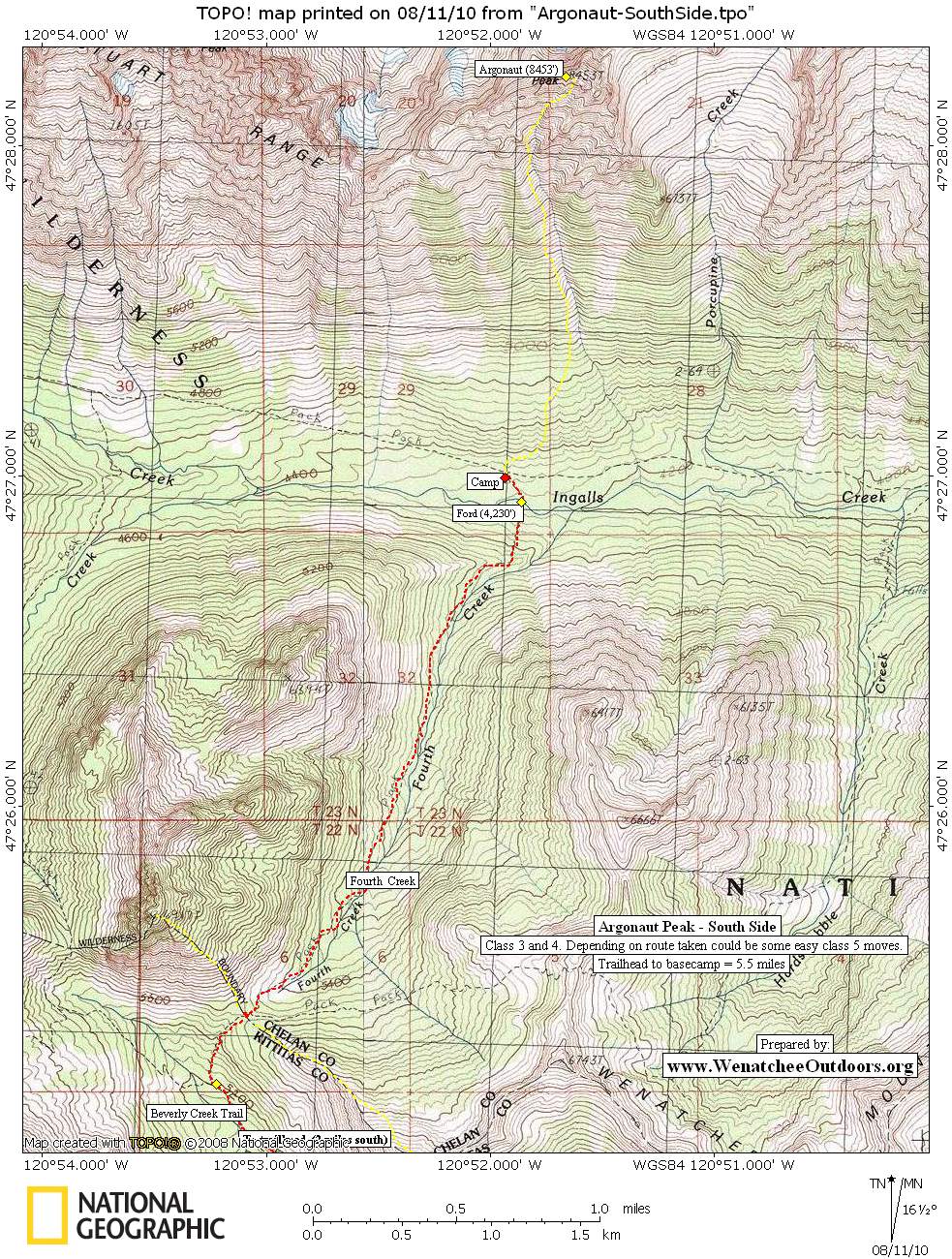