Ira Rushwald, Roger Gervin, and I recently completed an ascent of the West Ridge of Sherpa Peak in the Stuart Range.  At age 59, I was the youngest of the bunch, making us certainly one of the oldest groups to complete this climb.  As a newly retired school teacher, the climb was symbolic of my retirement, with the hike to base camp coming on the first day of school for my former work colleagues.  I e-mailed “good luck” to my former teaching partners before leaving town.

Roger recruited Ira and me to assist him with this “Backcourt 100” peak.  Sherpa is one of the few mountains on this list of climbs that includes technical rock climbing and rappelling. Roger has extensive scrambling experience and has been “working the list” for many years.  For Ira and me, Sherpa was a new peak that would challenge us to stay on route and keep the team going safely both up and down.  From a base camp near Ingalls Creek, our summit day was a dawn-to-dark 14.5 hours that included 3400′ of elevation gain to the base of the roped climbing and six pitches of rock climbing ranging from class 3 to a crux move rated 5.4 to gain the additional 400 feet of elevation gain to the exposed summit.

Much of the climb uses similar logistics to climbing Mount Stuart via the Cascadian Coulour.  Hike 4.5 miles over Long’s Pass and down the “tapeworm trail” to many camps near Ingalls Creek and the start of the Cascadian Coulour.  On the summit day, we hiked down the Ingalls Creek Trail an additional half mile to the Beverly-Turnpike junction.  Here a climbers trail begins ascending what it known as “Variation #1” towards Mount Stuart. This is the first gully system leading toward Stuart/Sherpa east of the more popular Cascadian Coulour.  Around 6000′ or so the climbers trail enters a spot where the gully narrows. Here we headed up a few more hundred feet to the east to a divide that separates the “Variation #1” gully with the gully to it’s east that leads more directly towards Sherpa. We grudgingly descended a few hundred feet into that gully, then ascended class 2 slopes to the table rock at 7400′ that some use as a bivy site. The last few hundred to a notch just west of the Sherpa summit and right on the Stuart Range divide had some class 3 moves. Ample space is here to sort gear, with our group reducing our gear to two packs so the lead climber could move more unencumbered.

Here we used the route description provided on the SummitPost website.  Not wanting to get Roger very far between us, we shortened some of the pitches, using several rappel stations as convenient belay anchors.  We made one route finding error midway through the climb.  On pitch 3, the description mentions crossing from the north to the south side of the west ridge.  We did this at a notch that led to an easy ledge on the south side. This ledge petered out, however, requiring a difficult fifth class move to turn a corner.  At the notch we should have ascended higher on the west ridge up a low-angle corner before moving the climb onto the south side of the west ridge.  On the crux headwall pitch, Ira placed a medium-sized cam for protection.  I thought of my friend Fred Dunham from Ellensburg who was on the first ascent team of this route in 1962 and wondered if they were able to provide any protection in this spot with pitons that were standard use back then. Here, Roger’s limited rock climbing experience was problematic. Unfamiliar with crack climbing techniques, he had difficulty climbing the crux move. Minutes of straining got him no higher than the ledge we were both on. However, with Ira providing tension on the rope from above and me providing a shoulder stand, we managed to get Roger past the crux.

The summit is very small and exposed.  Our group chose to climb one at a time to touch the top from a belay about 30 feet below the summit on a niche in the summit ridge.  Ira signed us in and with time being a real issue, we did not linger long, though the views begged for a longer sit.

At 4:15 p.m., we began our rappels to get off the rock and we worried about the lack of daylight hours left in the day to reach our camp about four thousand feet of elevation below. To our good fortune we found the rappel spots without delay. Ira rappelled first to locate the next rappel ledge.  Then I lowered Roger down to where Ira was located. After Roger was secured, I rappelled down to meet my team. While I pulled the rope, Ira would feed the other end into the next rappel station. I did not find the descent very pleasant–there was lots of loose rock that potentially could come down as rock fall. We were glad to be using helmets and managed to return to our remaining pack by about 6:30 p.m. A long class 2-3 descent remained to get to the climber’s trail in the “Variation #1” gully.  We reached this about 15 minutes before darkness enveloped us.  Headlamps guided us the remaining distance to camp.

Over the last few years, I have guided Roger on North Ingalls, Mount Stuart, and Argonaut Peak, climbs he aspired to do on the Backcourt100 list that were above his scrambling experience. Now the discussion centers around “The Mole”, the most difficult rock climb among the Backcourt 100 and more highly technical in nature than Sherpa Peak. 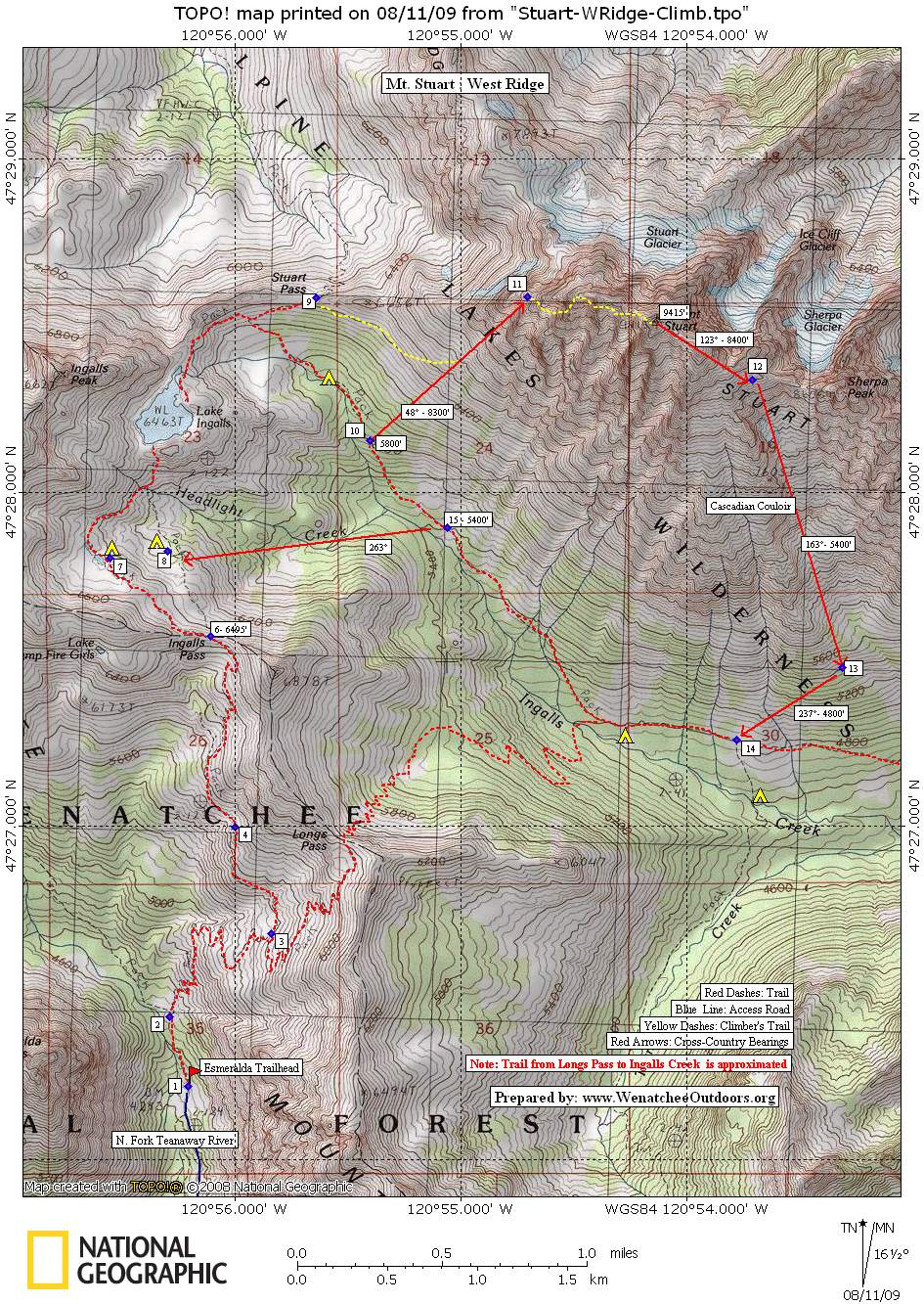