This is a nice 17-mile mountain biking loop using Forest Service Roads for the ascent and that descends back to the start on single track that flanks the lower portion of the Mad River near Ardenvoir on the Entiat River. In 2010 the Forest Service re-worked not only logged out this section of trail (it had received lots of deadfall late in the decade) but re-built some sections of the trail that were hard to maintain.

Ray Birks sent us the information below about the loop after he rode it in September of 2010. To Ray’s words we’ve added a useful topographic map that should help you stay on course.

9/26/10 – We rode the Lower Mad River from Pine Flat Campground but instead of heading up the trail we backtracked to FS Road 5700 and started climbing.  The climbing at the beginning was the steepest,but still not too bad. After about 3 miles, you get to a saddle and have the option of turning left on 5703 or continuing on 5700.  We chose 5700 because it was paved.  After looking at the GPS when we got back we probably could have taken 5703 and saved some time (and elevation).

The 5700 road continued flat for a while then began gradually climbing again and then eventually descended for 4 or 5 more miles.  We took a left on 5709 which is a dirt road. From here, you’re pretty much going downhill to the upper trail head.  There are a few intersections but stay on 5709.  You’ll pass 5711 but stay to the left, then you’ll come to another intersection that is not marked.  This is where 5703 intersects with 5709.

If you’re on 5709, turn right and go through the open gate.  If you’re on 5703, just continue straight through the open gate (it’s sorta hidden in the bushes but says “Road Closed” on it).  Take this a few more miles and eventually you’ll come to what we called the cul-de-sac where the road eventually ends.  You can see Mad River down below and the trail.  This is an obvious camping spot. (It’s actually called Camp Nine by the Forest Service).

Find the spur trail down the Mad River Trail off to the right and, in about 0.25 miles, you’ll come to a trail junction.  This is trail 1409 and is marked with a sign that also says you just came from Windy Creek Road and a campsite.

Turn left here and you’ll have 6 miles of Mad River Trail ahead of you. The first 2 miles are pretty rough and you can tell the trail is new because it is not packed down and there are trail markers everywhere. It actually climbs a bit more than we expected but eventually settles down and hugs the river on the way down. Once you get down the switchbacks it’s smooth sailing for the last 4 miles to the parking lot.

Permits. We didn’t have a parking pass at the lower trailhead but we didn’t find any signs saying we needed one. 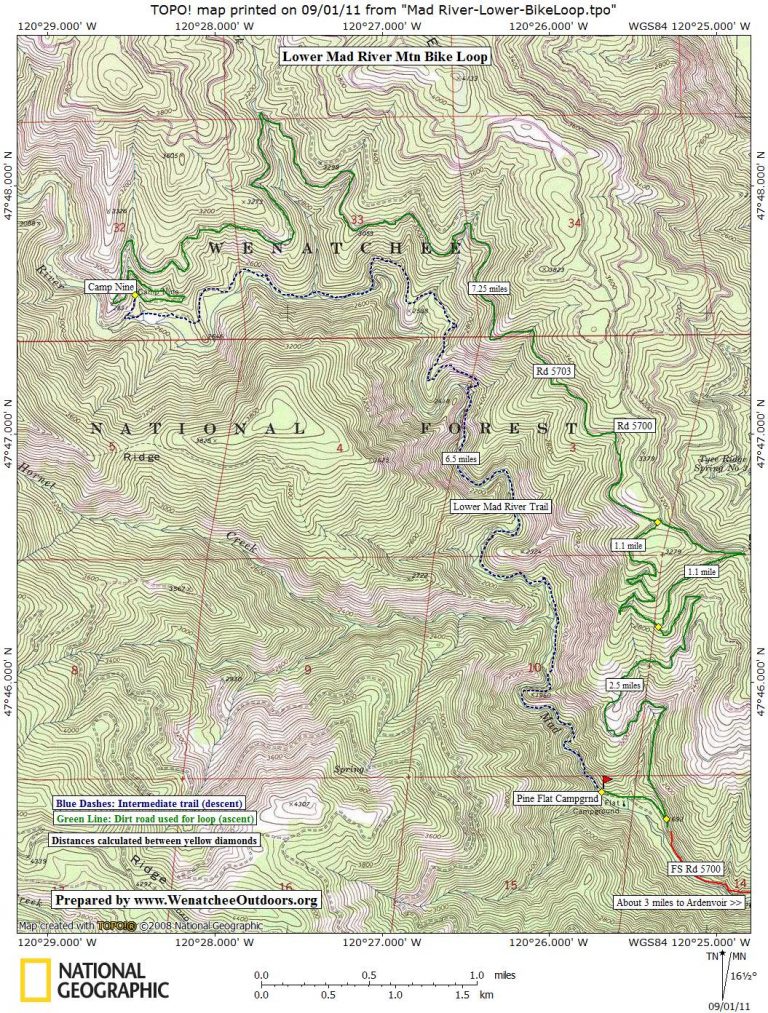