December 26. Over this snowless Christmas vacation, many Nordic skiers living in the Wenatchee Valley are getting frustrated by the lack of nearby places to go Nordic skiing. Stevens Pass Nordic is open as is Echo Ridge (above Lake Chelan) but places that are really close to home seem non-existent. Or are they? Mark Shipman just sent us this picture and a note capturing the Nordic skiing up on Blewett Pass.

“Thanks to a tip from Dave Jaecks, we skated many lovely miles on perfectly groomed roads off Blewett Pass today. I believe they groomed it Thursday.”

Snowmobiles and Nordic Skiing: The groomed trails Mark is referring to are part of the groomed snowmobile system starting at Blewett Pass. Cross country skiers are allowed on these snowed-over roads that are groomed, but on weekends the roads can be busy with snowmobiles moving at moderate speeds. The experience of using the groomed snowmobile trails is far more enjoyable for Nordic skiers (and safer for everyone) if skiers use them on weekdays rather than weekends. On this slow-to-get-going snow year, we’re not sure how busy the trails were on Saturday when Mark skated them – snowmobilers, like Nordic skiers, may be unaware that Blewett Pass has enough snow on the roads to operate.

Access: From the Y junction at Highway 2, drive 21 miles south on Highway 97 to Blewett Pass.

Parking: Park at Blewett Pass on the east side of Highway. A Sno-Park Permit is needed to park here. The Sno-Park permit pays for the plowing of the parking lots and the grooming of the trails of a statewide system of snowmobile and Nordic trails. If you don’t have a pass, you can park for free 0.6 miles north of the pass at the highest pullout that connects to the Tronsen Meadows non-motorized area. This is a small pullout capable of handling several cars. The Tronsen Meadows system does not allow motorized used and is not groomed.

Grooming schedule: To see when the trails around Blewett Pass were last groomed, or when they are scheduled to be groomed next, go to the State Parks’ page and scroll down to get the grooming schedule.

Trip Instructions: The trails leaving Blewett Pass (elevation 4,100 feet) climb steadily for 3.5 miles before coming to an intersection (el 4,890 ft). Here you can:

Map 1: Of the groomed snowmobile trail system at Blewett Pass.

Map 2: of the ungroomed non-motorized trail system that’s less than a mile north of Blewett Pass at Tronsen Meadows. Nordic skiers can use several pullouts accessing this system. The pullouts can be used free of charge. 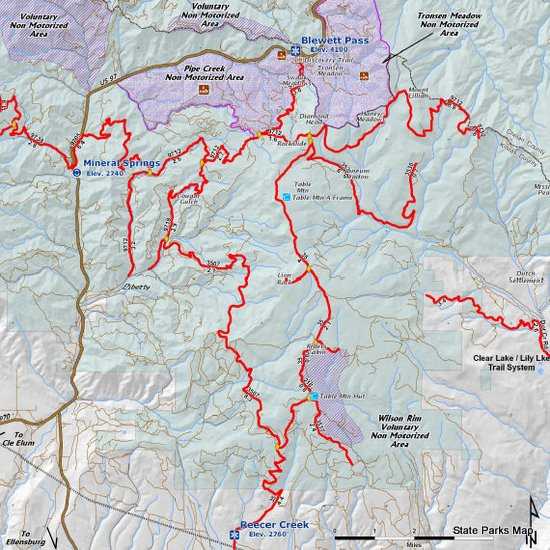 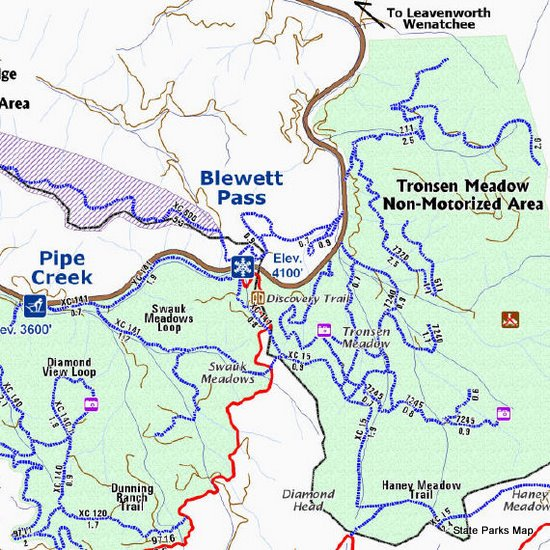