The elusive species of wolverines have a long history in their native Washington — they survived the Ice Age but were nearly driven to extinction by over-hunting and trapping in the early 1900s.
Recently, wolverines have made a comeback in the North Cascades: Conservationists estimate between three to four dozen of the bushy-tailed mammals currently populate the mountain range.
Surprisingly, artificial intelligence (AI) technology could play a role in helping scientists further protect these deep snow dwellers vulnerable to climate change and habitat loss. 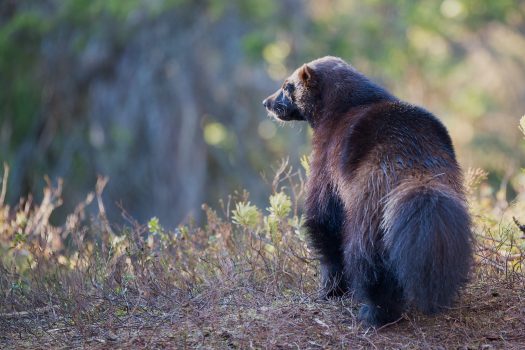 Washington conservationists are focused on the recovery of the small carnivores. Using remote cameras that detect motion and a machine learning system, a method that finds patterns in a large amount of data, some researchers say they have the answer to tracking the shy creatures during a critical time for their survival.

At the forefront of wolverine recovery in the state, Dr. Robert Long — senior conservation scientist of Seattle’s Woodland Park Zoo — has placed remote cameras throughout Washington, Idaho, and Montana to track the animals for nearly a decade.

The cameras allow conservationists to collect thousands of images that track the movements of wolverines and determine whether shifts in climate harm the populations. Such information could be used to create corridors for the wolverines, said Long, like the Interstate 90 animal overpass that enables safe passage over highways that cut through the North and South Cascades.

“These top predators, or carnivores, can have major effects on the ecosystem. If they’re gone, then their prey can increase in number,” said Long. “We don’t have a sense of the exact role these creatures play, so it would behoove us to ensure their populations persist,” he added.

However, finding pictures of wolverines — among tens of thousands of images depicting various wildlife, people and swaying tree limbs that falsely triggered the motion sensors — proved to be time consuming for researchers. A lack of staff and volunteers to classify the photos led to an information lag, with biologists sometimes waiting months or years to use the data found in the images.

Manoj Sarathy, a young gamer and a volunteer at the Seattle-based nonprofit Conservation Northwest, set out to eliminate the problem using his knowledge of AI.

Sarathy developed a machine-learning system that could classify images from remote cameras by annotating thousands of images from several conservation organizations and feeding them back into a computer program. As he continued to improve the model’s training to recognize various objects, Sarathy sought to differentiate photos of animals from blank images, but he found that his gaming computer lacked the processing speed to train the system.

So in 2018, Sarathy partnered up with Long to apply for a Microsoft AI for Earth grant, which provides cloud and AI tools to individuals and teams solving sustainability issues. As one of the over 300 AI for Earth grantees since Microsoft launched the program in 2017, Sarathy used $5,000 worth of cloud-computing credit that allowed him to train the system to sort all images into folders that corresponded with animals, humans or blank images.

Long believes the machine-learning system will help conservationists gather information about the species before it’s too late.

Ahead of the United Nations Climate Action Summit, Sarathy — now a freshman in the University of Washington computer-science program — is continuing his project and hopes to inspire others to protect the environment. “With me being an example, people can get involved with conservation using any skill they have without any kind of formal training,” Sarathy said.