Larches to Lederhosen
By Jim Brisbine

For this year’s annual Golden Larch Trip, I spent four glorious days backpacking through the Chiwaukum Mountains with Eileen, Lisa L, Kevin L (“K. Lo”), and Kevin W (“K. Dub”).
The larches were pretty close to their prime color, the weather was better than expected, and the trail conditions ran the gamut.

Day 1: We dropped a car at the Icicle Ridge trailhead in Leavenworth, then drove up to the Chatter Creek trailhead and started our hike to Chatter Creek Pass. It was sunny, warm, and calm—much like an early September day.

Along the way, we encountered one familiar person (Don Beavon) and one new acquaintance (Chuck, from Leavenworth). These would be the only other people we’d see for the next three days. Despite being a scant few miles from the
hundreds of recreationists
crowding through Icicle Canyon every day,
the Chiwaukum Mountains still have an isolated feeling.

After arriving at Chatter Creek Pass, we dropped packs and made a sidetrip up Grindstone Mountain. Chuck had just returned from the summit and provided us with some useful route information. Simply following your nose upward is also an effective strategy for this peak.

Grindstone Mountain features pleasant class 2-3 scrambling on generally solid granite. We reached the summit in late afternoon (1.3 hours from the pass) and enjoyed a half hour of remarkably warm weather and good visibility. Once back at the pass, we carried our packs an easy mile down to Edna Meadows. A small creek flows out of this meadow to provide water for camping.

Day 2: We woke to intermittent winds and incoming clouds. The forecast called for moderate rain and wind by afternoon, so we made a morning side trip over to Lake Edna and up Cape Horn for more views.

Back at Edna Meadows, we turned onto the Icicle Ridge Trail and followed it down to Index Creek, then back up to Painter Pass (2.8 hours from Edna Meadows) on the ridge between Index and Painter Pass.  Amber grasses nudge up against golden larches at this sublime and lonely pass.


Our day’s destination was Augusta Lake, several miles to the east. However, rather than continuing down the trail to Carter Lake and then hiking over Augusta Pass, we elected to take a cross-country trek over to Lake Ida and up to Big Lou Mountain. This turned out to be a good choice, we were treated to the most beautiful scenery of the trip. A low saddle about one mile southeast of Painter Pass gave us easy access to Lake Ida. It was a stunning sight to come over the ridge and see the sapphire blue water nestled in a shallow bowl of larches and grass. If this had been a five-day trip, we surely would have made camp right then and there.

From Lake Ida, a vast grassy slope leads gently upward to Big Lou Mountain. I believe this to be the largest and finest example of an alpine tundra outside of the eastern Pasayten Wilderness. As we approached the summit of Big Lou Mountain, a chilly gale kicked up, and we saw dark clouds spilling over Snowgrass Mountain to the west. Most certainly, the forecasted storm was arriving.

We stayed on the summit only long enough to sign the register, which dates back to 2002, and
scoped out our descent route
to Lake Augusta. Quickly we dropped down the mountain’s northern slope, then crossed two meadow basins to reach Lake Augusta in early evening (9.5 hours from Edna Meadows). Fortunately, the impending storm never amounted to anything more than wind gusts and a few drops of rain.

Day 3: Following a cool night, we woke to a skiff of graupel on the ground and blue patches overhead. Our day involved an 1,800 foot drop into Cabin Creek, immediately followed by a 2,000 foot ascent of Icicle Ridge. This topographical dipsy-doo was made more challenging by the fact that most of the trail has not been maintained in a decade or so and is difficult to track in many places. The worst location is on the southern side of Cabin Creek, where the trail switchbacks up through a recent burn. It took all of our eyeballs to spot cut logs and overgrown trail bed. Afficionados of forgotten and abandoned trails would be delighted by these many miles of sketchiness. (Editors note: See the ‘alternate connection’ noted on the map — we have skied this line in winter and believe it would allow good summer travel as well. )

Eventually, we gained the crest of Icicle Ridge and followed the meandering old trail to Icicle Ridge Lookout. The lookout cabin is long gone, but the airy foundation boulders make this a special place nonetheless. Visitors will revel in outstanding views across the Chiwaukum Mountains and over to the northern façade of the Stuart Range.

It was late afternoon when we began our three-mile traverse from the lookout down to Power Creek Tarns. The ridge crest was burned many years ago and now supports mostly low grasses and eerie silvered snags. We camped on sandy terraces above one of the tarns (8.5 hours from Lake Augusta). These tarns don’t offer much in the way of scenery, but they do provide the only reliable water source between Cabin Creek and Leavenworth.

Day 4: The night had been crystal clear — when we stumbled out of our tents in the early morning hours we found a thin layer of frost coating our camp. Our last several hours of the trip were spent hiking down the nose of Icicle Ridge amid yellow and red foliage. The dozens of day-hikers we encountered on the lower trail signaled the end of our marvelous journey from larch country to lederhosen country.

Peaks climbed: Grindstone Mountain (7533′), Cape Horn (7316′), Big Lou Mountain (7763′). More about Grindstone Mtn from the ‘Climbing-Mountain guidebook. Cape Horn can be easily walked up by following the trail beyond Lake Edna toward Ladies Pass and then walking steeply up the east or northeast side of the peak before the trail drops to Ladies Pass. Big Lou is also a non-technical walk-up peak that is not very frequently climbed simply because trail access is not that simple. More information in our ‘Ski-Backcountry’ guidebook about Big Lou (aka Big Slide Mountain). 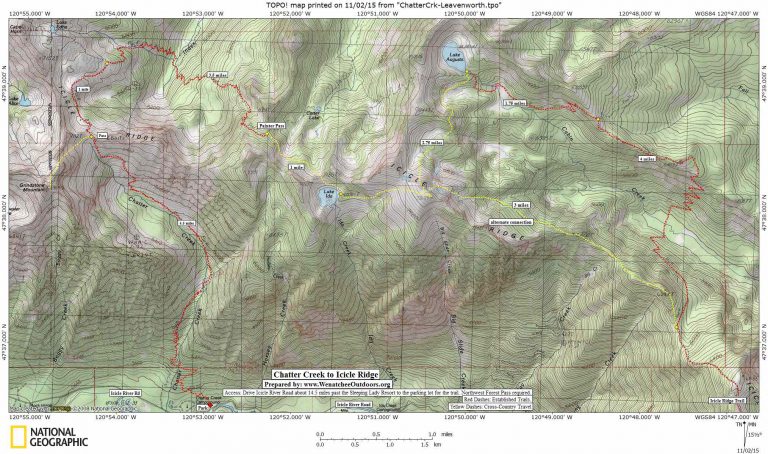 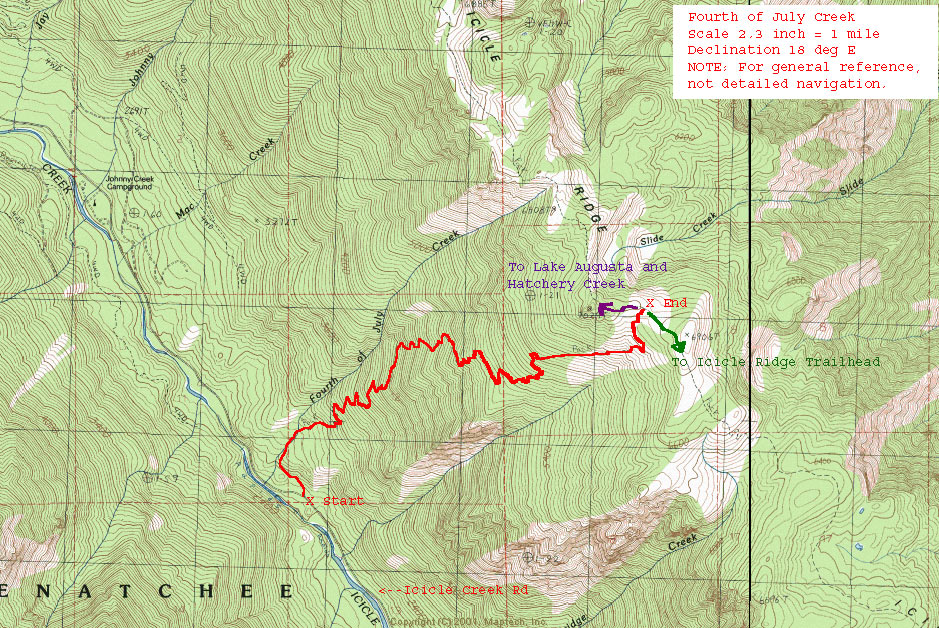 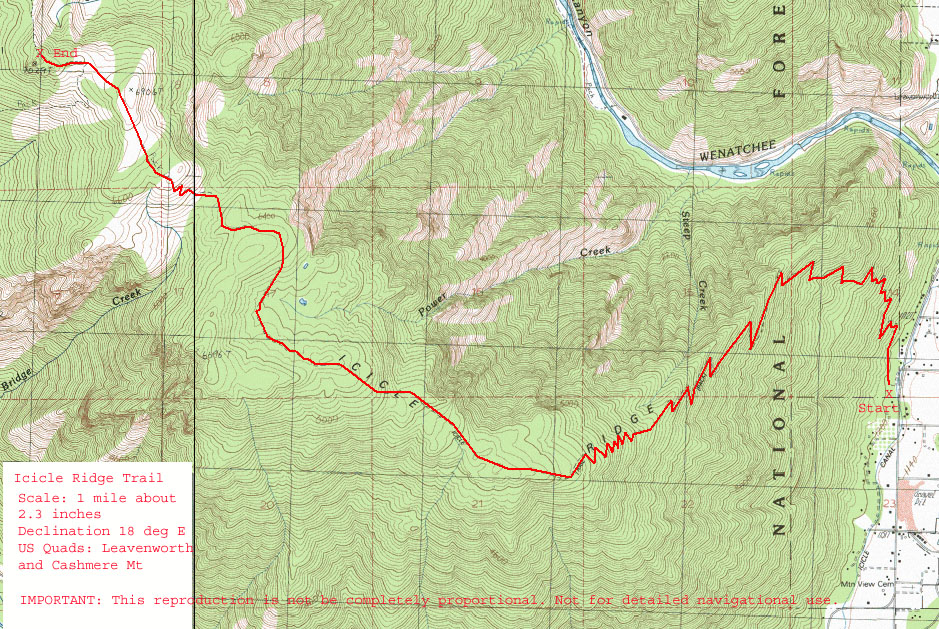